You Are A Chump (Mugged By Wall Street, Round 2)

Congratulations to the workers at Republic Windows and Doors for standing up for their rights. Those workers made the connection between the Bank of America's lending in-action (after the Bank received bailout money expressly to facilitate loans), Republic's failure to pay them severance they were due by law, and the recent bailout of Wall Street firms. In the end, two banks finally did the right thing and lent Republic the money to cover the workers' severance pay, unpaid salaries, and health coverage.

What I read from this story: the marketplace does not correct itself. The trickle-down economics, started during the Reagan administration, has failed. Simply, greed gets in the way.

In the Republic Windows and Doors example, the bailout money given to the banks did not trickle down to the companies and workers as intended. In the example with AIG, after receiving bailout money AIG executives threw a huge party. These corporate and bank executives are proving that they can't be trusted to do the write thing... or are painfully slow to do the right thing only after much prodding and public humiliation.

It really pains me to write this. Follow the bailout hearings in Congress and you get a clear impression that Wall Street and bank executives probably view you as a chump. More precisely, they view all U.S. taxpayers as chumps. Why? We've allowed our elected officials (so far) to give the banks billions of dollars without any oversight, rules or guidelines.

I strongly urge you to watch this: 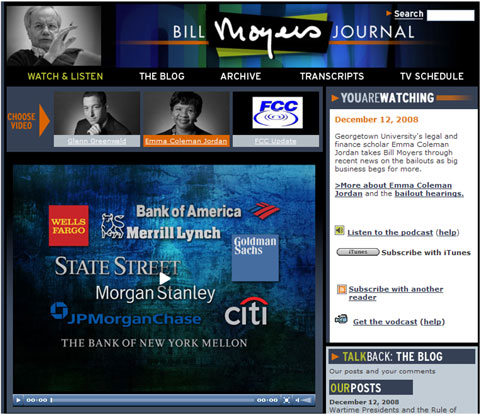 The video is also available here. The video includes clips from the Congressional bailout hearings, including this exchange:

"REP. ELIJAH CUMMINGS: Mr. Kashkari, in the neighborhood I grew up in, in the inner city of Baltimore, one of the things that you tried to do was to make sure that you were not considered a chump. And what "chump" meant was that you didn't want people to see you as just somebody they could get over on. And I'm just wondering how you feel about an AIG giving $503 million worth of bonuses out of one hand, and accepting $154 billion from hardworking taxpayers. You know, because I'm trying to make sure you get it, you know? I mean, and you know what really bothers me is because - all these other people who are lined up. They say, well, is Kashkari a chump?"

There have to be guidelines, rules, and oversight along with any bailout, since corporate and bank executives have proven they can't be trusted to do the right thing. And those guidelines, rules, and oversight must have teeth: jail-time for executive violators and repayment of the money lent. What should those guidelines and rules be? Here's my list (which I sent weeks ago to my elected officials when the bank bailout was first discussed):

After you have watched the video, then write to your elected officials and tell them you are not a chump. Tell them that you demand effective oversight, guidelines, and rules governing any bailout money. Tell them that you expect the companies receiving bailout monies to be held accountable; executives to repay the money and to go to prison when they violate the rules. Otherwise, you will hold them accountable at election time.

Posted at 08:58 AM in Corporate Responsibility | Permalink | Comments (2)

The banks did not receive money to lend on demand. The assumption is that because Bank of America received bailout money, then Bank of America has to lend to any company or any person who "needs" the money. But that clearly was not the purpose of the bailout. http://dissentingjustice.blogspot.com/2008/12/laid-off-republic-windows-and-doors.html

> The banks did not receive money to lend on demand

"Treasury today announced a voluntary Capital Purchase Program to encourage U.S. financial institutions to build capital to increase the flow of financing to U.S. businesses and consumers and to support the U.S. economy."

Capital is needed to make loans and investments, not solely for acquisitions and mergers. The bailout offsets the revenue losses from mortgage foreclosures and poor lending practices. This is what banks do. make money by lending money. Our economy relies upon it. The above statement "increase the flow of financing to U.S. businesses and consumers" makes my point.

My opinion is that the above standards are, a) not strong nor far-reaching enough, and b) don't have sufficient "teeth" or strong penalties. When my government is deciding when and how to help an ailing industry, as a taxpayer and voter I have a right to demand certain conditions with those bailout loans.