[Editor's Note: I am pleased to feature another post by guest author R. Michelle Green, the Principal for her company, Client Solutions. She is a combination geek girl, personal organizer, and career coach. She has studied what makes some individuals embrace or avoid information technology. (She’s definitely one of the former.) Michelle helps others improve their use of technology in their personal or professional life. Today, Michelle tackles Google and privacy.]

Have you ever had the experience of wiping up a spill and then realizing the clean spot makes the rest of the table look bad, so now you have to wash the whole table? That’s the way I feel about my recent blog posts. I’ve been looking at more and more things that infringe on our privacy, and now I just have to keep pulling at that thread, even if it unravels my whole sweater... Wow, a Cusinart of metaphor. Anyhow.

I was patting myself on the back for being Facebook security savvy when a Chicago friend tells me he won’t trust Google with his web and search history. He also opted out of search personalization, where Google puts sites you already like to visit higher in your search query results. The hell you say! Don’t trust Google!? Google is wonderful, Google is my friend! The company’s motto is “Don’t Be Evil,” right?

Google’s gotten a lot of slack from people like me, who love the effectiveness, creativity and style in the tools available online and through text, for personal and professional needs. The search engine is a thing of beauty, no question. But we’ve come a long way (especially in internet years, my friend) from Google’s early statement, underscored on the Corporate Philosophy page last updated September 2009, that all they wanted to do was be the very best search engine they could be.

Let’s examine the evidence. Google CEO Eric Schmidt in a 2007 Wired interview said that Google is no longer first a search company, but an advertising company. In a 2008 CNBC interview with Maria Bartiromo he returned search to primacy, saying it was “even more important…than advertising,” and citing it as critical to end-user happiness. But when CNBC can say that 95% of your profit comes from selling AdWords, make no mistake about it, it’s the company’s priority.

The Business Insider chart below shows advertising’s role as a function of Google revenue over time: 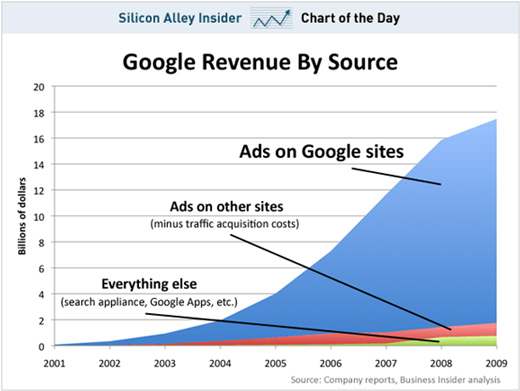 This gives more credence to Schmidt’s 2007 statement to Wired: Google is advertising (Doubleclick), a social phenomenon (YouTube, Google Chat and Google Groups), an end-user system (Google Apps, Android) and a giant supercomputer. For a company that puts transparency high in its ideals, there is little or no clarity about who owns the your web and search history. (Since possession is nine-tenths of the law, I think Google owns it, even if my name’s on it.)

Is that in and of itself evil? It might be nice to have Google organize everything you do online, help you find that hysterical sleeping ancient Pomeranian dog you saw three years ago. So what if they keep it on their own servers? The big sin here isn’t that they do it – others can and do also.

If you are a Comcast 'net user (or Yahoo, or AOL or portals) and stay signed in while you surf, they can associate your actions uniquely with the profile information you offered at sign up, just as Google does with its Gmail users. You might even say they’ve been a little more straightforward about it, offering greater user control with it than the aforementioned web portals. There’s a dash of hubris and a fair share of hypocrisy, however, in Google’s assertions that they’ll never do anything evil with the data they amass. Data lives to become knowledge, knowledge is power, and we know what power does. Absolutely.

So what information does Google have about you? Inquiring minds and all that. Check for yourself by going to your Google search page and clicking on the web history link in the upper right hand corner. Then for funsies, follow the link that says, “is that everything?” where Google also talks about its cookies and server logs.

If you already have a Google account, you can get more precise information at Google Dashboard. My Dashboards for different Gmail names are different, but they show they’re related because I have their calendars connected. The Search history is far spottier than I expected, however, in part because I’m scrupulous about logging in and out of Gmail on a per task basis. And while at first blush it may look sparse, note they are offering you samples of your search in various categories, you must click on the category for more detail.

Don’t get me wrong, I remain a Google fan. I think it’s incredibly cool that Washington D.C. firefighters are using Google Apps, for example. It lets them call up schematics of abandoned buildings, the locations of fire hydrants, whether the hydrants are working or non-working (!), and the locations of their trucks. The District showed a first-year taxpayer savings of $3 million using the tool. I love “20 percent time,” where Google encourages use of work time on personal projects as a path to greater innovation. I like how they’re standing up to China. However, I believe the CEO’s statement to CNBC, “If you have something that you don't want anyone to know, maybe you shouldn't be doing it in the first place,” is problematic, (and from him, maybe a tad hypocritical).

Even if you trust Google today, what if pieces of the company get sold off to less beneficent people? Could the management mantra change one day from “don’t be evil”? With so very much information in one place, how vulnerable are they (er, are WE?) to the loss of their password program Gaia? And, has their very success blinded them to recognizing the cumulative steps toward monopoly, no matter how benevolent or effective? I am very impressed with the commentary, “Google’s Microsoft Moment” likening their current position to Microsoft in the 1990s – that they are in danger of becoming what Google’s founders once found anathema.

Readers going for extra credit should check out CNBC’s excellent special Inside the Mind of Google, available in its entirety online, and running on CNBC again on June 21st.

Google is less effective lately. The screen is crowded with junk ads. I look for things that I know are there and I have to dig through their offerings first. Google maps is bad too. I look for a business in my area and the chain stores first or the stores that have obviously paid to be on top of the heap. I also noticed that the GPS on my phone is offering me things like hotels in the area, even when I'm looking for the bloody city library! Talk about a junk shot.

it would be so sad for the sleekness of their original presentation to be ruined the way you describe. I hope they can find a middle ground... Thanks for the feedback Donna -- R. Michelle Green