[Editor's Note: I am pleased to feature another post by guest author R. Michelle Green, the Principal for her company, Client Solutions. She is a combination geek girl, personal organizer, and career coach. She has studied what makes some individuals embrace or avoid information technology. (She’s definitely one of the former.) Michelle helps others improve their use of technology in their personal or professional life. Today, she discusses the habit by hotels to limit their customers' high-definition TV quality and choices.]

What used to be the relaxing part of an evening away from home in a hotel has become a teeth-gritting, fingernails-on-chalkboard experience for me. Hotels currently force you to look at warped images on TV.

This used to be a big deal only for cineastes and directors (well said, Mr. Spock), when small television sets could not do justice to widescreen movies. 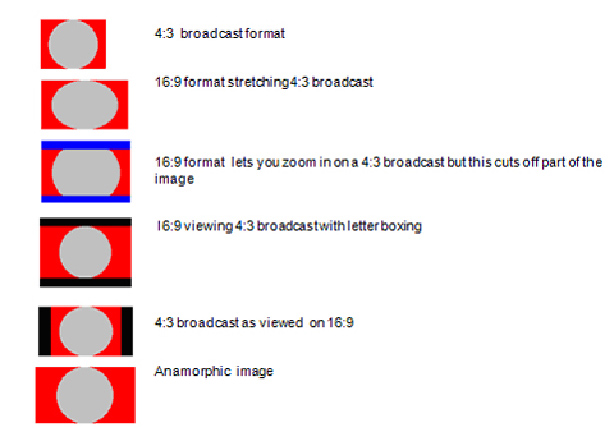 Now, any image is in jeopardy. This picture may help explain. A circle on a regular TV can, depending on the TV setting or the broadcaster’s whim (grrr, TBS), look like a vertical oval, a horizontal oval, a circle with the tops/bottoms cut off, or a circle with black bars along its sides. Next time you look at a news show, you may notice that nothing too important is going on in the far left or right of the screen. They do that because broadcasters and content providers know that a third of US households still don’t have a high definition TV. Worse, some broadcasters alter the original image, cutting, cropping, stretching or squeezing it (no matter how weird it makes people look) so you won’t see black bars at the side or the bottom. Would you listen to a radio station that transmitted garbled or mangled music? Would you keep using speakers that did the same? So why do we tolerate distorted TV images?

TVs used to be simpler: you needed on/off, up/down, maybe sleep, mute and closed caption. Today’s digital TVs, however, are computers themselves. On Auto Wide, my Sony TV seems to ‘ask’ each channel what’s the biggest picture I can give my owner, and then delivers that (distorted or not). Watch the cable box display when you first turn a digital TV on: the readout changes for a split second. That’s a software handshake in progress. The TV is no longer a passive receiver of information. So hotels must control the TV’s use as a computer, limiting not only a hacker’s access, or a geek’s ability to play non-hotel entertainment, but also anyone’s potential to alter color, tint or sound quality.

Just because I understand the phenomenon doesn’t mean I like it.

When I first saw the distorted LG screen image in a hotel, I said, no problem. I just need the original LG remote, and not this downscale hotel-only remote designed to push paid product. That hotel couldn’t (wouldn’t?) provide one. I complained to no avail. The next hotel I stayed at cordially and quickly brought me the LG remote. Hotel mode locks out all the functions, however, with the exception of volume and channel changing, even on the original remote. I hear my fellow tech geeks – what about the control buttons on the TV itself? Yes, this TV had those buttons (not every TV will) – but they were locked out too.

One more chance: I had a laptop and a WiFi connection. Surely the net could give me direction where the hotel engineering staff couldn’t. I tried some hacks that might have worked back in the day, but no more. I learned to my dismay that many hotel TV menus can now only be accessed with remotes carried by the manufacturer’s installer, and used in concert with the remote left with the hotel (the ultimate in authentication and authorization).

It’s a small and perhaps pointless crusade, with energy, food, water, and jobs at issue across the world. I laugh at myself when I go to friends’ homes and feel driven to adjust their TV’s aspect ratio. But would it kill someone to make a hotel remote that permitted us to see images correctly?

Posted at 08:58 AM in Corporate Responsibility, Travel | Permalink | Comments (0)