The current Linkpass fare is about $59. The information brochure (Adobe PDF) about the proposed fare and service changes is available at the MBTA website. The MBTA estimates a $161 million budget deficit in fiscal year 2013. It has a $5.2 billion debt load, which equates $450 million in debt payments each year. Those debt payments equal fare revenues.

In some instances, fares would increase more than 100%. The MBTA compared its fares to transit systems in other American cities (Adobe PDF). The MBTA also prepared an impact analysis document, which concluded that the service cuts will result in poorer air quality.

To collect feedback from the public about which scenario is best, the MBTA is conducting a series of meetings around Boston and in the suburb communities it serves. I attended a Thursday, February 2 session at the Dorchester House Multi-Service Center in Boston's Dorchester community. About 250 residents attended. It was good to see a strong turnout at a midday 1:00 pm session. No apathy here! 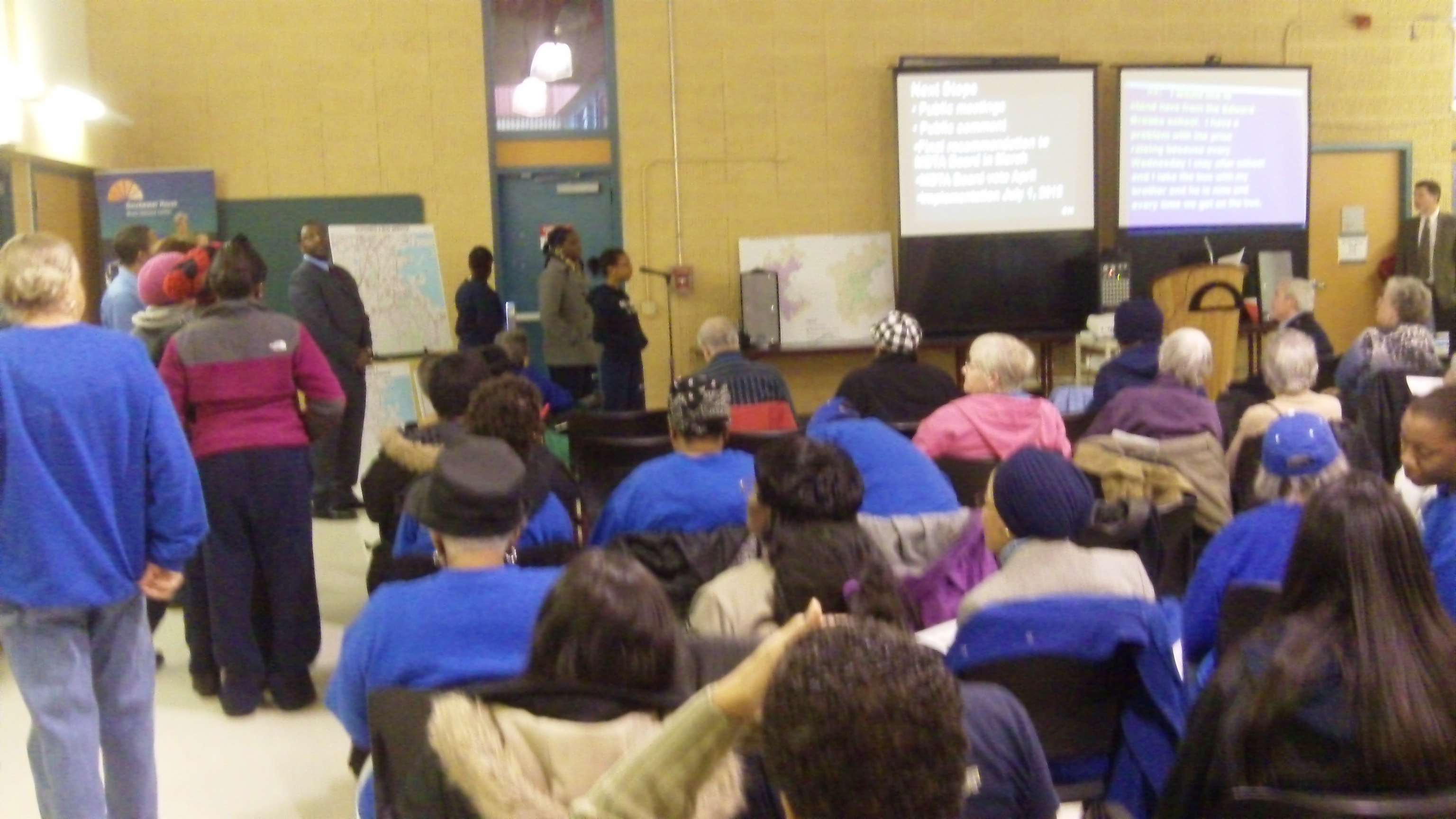 Caption: residents speak at the February 2 MBTA meeting at the Dorchester House

An MBTA official briefly presented its public presentation about the proposed changes (Adobe PDF). Most of the two-hour meeting was reserved for residents to speak. A variety of residents spoke: working adults, teenagers, college students, elders, they physically challenged, and retirees. During the session, I saw about 50 residents speak.

A common theme voiced by residents was that the fare increases under both scenarios were steep; many couldn't afford them. Many residents don't have a car, or alternate travel means, and rely on MBTA travel services. Students and retirees have limited incomes, if any, and both the fare increases and service cuts (e.g., buses) would greatly affect them.

MBTA officials handed out a printed statement from Boston Mayor Thomas Menino, which read in part:

"The MBTA provides absolutely critical services to Boston residents, commuters, and visitors. As a transportation hub and economic engine of the region, Boston is uniquely affected by the state of our public transit system... Many administrations have simply passed the buck onto the next administration -- and now the MBTA must find a way to operate with an enormous structural deficit. However, riders should not be forced to shoulder the entire weight of the debt..."

I did not see any reporters from the news media. Several activist groups attended the meeting, spoke, and handed out flyers. The groups included the Coalition to Fund Our Communities, Transportation For Massachusetts, Socialist Equality Party, and Global Exchange. So, there are plenty of ways for residents to get involved and have your voices heard. Contact your elected Massachusetts state representatives today!

The MBTA has scheduled upcoming community meetings for:

The Massachusetts Bay Transit Authority (MBTA) proposed several changes to avoid loses and provide well and satisfaction service. The authority has modified the process and reduces some unnecessary expenditure. No doubt it will touch the success.

The MBTA has made a new business strategic for achieving success and provide better service to customer.Thy had called a meeting with student, senior citizen regarding that issue for cooperate with the authority. Thank you so much for nice plan. I expect the authority will achieve the goal.

Thanks for sharing this wonderful post! I really appreciate this very informational post that I have found from your site. You seem to be very well-knowledgeable about it and I am very thankful for sharing it especially to people who are needing these facts.