Questions About The Target Data Breach And How Hackers Broke In

The Businessweek article went further and explored possible links between the breach and Russian hackers operating in Odessa, Ukraine. First things first. There will be plenty of time later to profile the hackers. Today, stay focused on breach details, the retailer's post-breach response, and the breach investigations. The goal is to report what happened so things can be fixed. Consumers want and need to know they can trust banks and retailers to protect their payment card information. 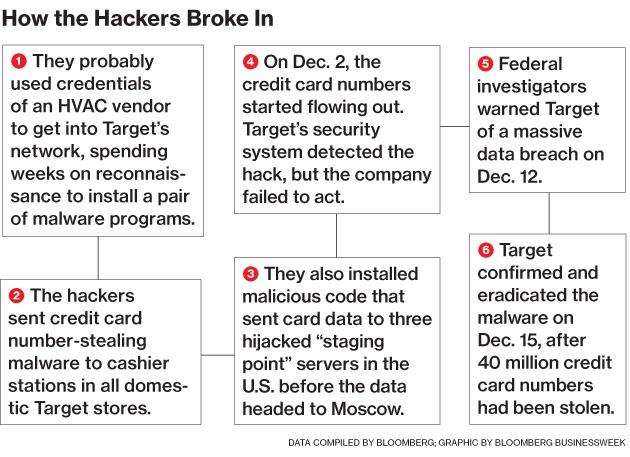 See box #1 which mentioned a HVAC vendor and used the word "probably." The conclusion seems to have been based upon an email attack described in this KrebsOnSecurity article:

"... investigators believe the source of the Target intrusion traces back to network credentials that Target had issued to Fazio Mechanical... Multiple sources close to the investigation now tell this reporter that those credentials were stolen in an email malware attack at Fazio that began at least two months before thieves started stealing card data from thousands of Target cash registers. Two of those sources said the malware in question was Citadel – a password-stealing bot program..."

Knowing the exact scenario is important, so relevant fixes can be applied to prevent a massive breach like this from happening again. Hopefully, Target's final breach investigation report will clarify and explain things.

During the past 6+ years I've written this blog, I've learned that online thieves are smart, persistent, and go where the money is. A January 2014 Let's Talk Payments article mentioned several of Target's major partners:

"Companies performing these [payments processing] roles for Target were identified in a research note by Robert W. Baird & Co analysts on Dec. 19... the merchant acquirer used by Target for credit and debit card transactions is Bank of America Merchant Services, a joint venture of Bank of America and KKR’s First Data Corp... The note also identified Vantiv of Cincinnati as processing transactions for Target customers who type in personal identification numbers for debit transactions... Target-branded payment cards are issued by Toronto’s TD Bank Group."

Regular readers of this blog recognize First Data and understand how much information the processor collects about consumers. (New to this blog? To learn more, select "Data Breaches," "Payment Procesors," or "Retail" in the right-column tag cloud. Or enter a company name in the right-column search mechanism.) Regular readers of this blog also recognize Bank of America Merchant Services, and its joint venture with First Data to process the payment transactions of the bank's retail (e.g., checking, debit card, credit card) customers. Other banks probably have similar arrangements with First Data.

Target's REDcard loyalty program includes the Target-branded credit and debit payment cards. According to a quarterly filing with the S.E.C., REDcard penetration increased from 12.8 to 18.6 percent during 2013. That's huge growth in one year. Good for Target: its shoppers like using REDcards. Bad for Target: its data breach has threatened that growth, REDcard usage by shoppers, and payments processors' revenues (and profits).

Smart hackers would focus on vendors with the best credentials; credentials that provide the best access to Target's computer systems and network. Another question: which vendor probably has the best credentials: a small HVAC vendor or a key business partner? The KrebsOnSecurity article discussed how Target required two-factor authentication for some vendors and not others. Maybe a small HVAC vendor was the easiest way in for the hackers. Maybe not. I hope that the formal Target breach investigation clarifies and explains things. Maybe the answers will be the same as reported in the KrebsOnSecurity article. Or maybe not.

In a January 2014 new story by SC Magazine, a First Data Corp representative denied that the processor's systems were breached:

"First Data processes some transactions for one of Target's acquirers, but we have no indication that our systems were involved in any of the incidents reported by Target,"

"No indication" doesn't sound to me like a resounding, definite "no" with 100 percent confidence. Reportedly, the First Data representative also said:

"The situation being reported by Target is a concern to all of us in the payments industry... data security is of paramount importance to First Data, which is why we work closely with our clients to protect cardholder data through our own system monitoring and the risk management solutions we offer our clients.”

Hmmm. Payments processors have had data breaches... massive ones. You may remember the Global Payments and Heartland breaches. First Data Corp has experienced a data breach too, at its Western Union unit.

Reportedly, the U.S. Secret Service is also investigating the Target data breach. That implies an interest in any systemic retail or banking security issues affecting the country's money supply. Systemic issues that come to mind are breaches at multiple retailers, the obsolete technology for payment cards, weaknesses in retail payment processes, and breaches at banks or payments processors. To me, a breach at a tiny HVAC vendor don't seem to rise to level of systemic.

Again, this is all speculation. I'm not saying one of Target's partners was breached. I don't have access to the data investigators have. All I'm saying is that a thorough, broad breach investigation needs to ask the question: was anyone else breached? The Target breach shook consumers' trust, and the breach investigation needs to address that. Trust matters. Consumers want to trust that banks and retailers can protect their card payment information.

Maybe the answer to this question will be the same; a small HVAC vendor's breach was the setup. Maybe not. A lot has happened since January. When 110 million records are stolen, one has to ask... one has to look, thoroughly.

I'd hate to think that the breach investigation stopped after finding the HVAC vendor breach and didn't look further for earlier breaches at other vendors or partners. If one wants to reassure consumers of secure card payment  processes, you have to look further... and thoroughly. And if there were other breaches, report them, too.

If a payments processor was also breached, then those partners would likely be added as defendants to any lawsuits. The Businessweek article mentioned 90 lawsuits. Several lawsuits have already been filed by banks and by shoppers.

As for me, I am reverting to using cash and checks, which merchants with check verification systems seem happy to accept. Are checks more secure than credit and debit cards? Or am I simply deluding my self with a false sense of security about using check in lieu of cards?

If you want the most privacy possible, shop with cash. If you want convenience, shop with your credit cards; never with debit cards. Stolen debit card information provides thieves with direct access to your checking account. Avoid prepaid cards. Why? 1) Too many fees, 2) too many high fees, and 3) consumers have fewer rights with prepaid cards:

Your Rights And The Differences Between The Three Types Of Plastic In Your Wallet Or Purse
http://ivebeenmugged.typepad.com/my_weblog/2012/03/fdic-prepaid-cards.html

You may also find this guest-author blog post helpful:

Will A Credit Card Or a Debit Card Protect You From Fraud Better?
http://ivebeenmugged.typepad.com/my_weblog/2012/08/cards-fraud-protection.html

To learn more, select "Credit Cards," "Debit Cards," or "Prepaid Cards" in the right-column tag cloud. I am not sure about checks, and have to do some research on that.

On March 26, 2014, Target's Executive Vice President and Chief Financial Officer, John Mulligan, testified before the U.S. Senate. Mulligan repeated the HVAC excuse and was vague about how the hackers obtained stronger password credentials:

"We believe that the intruders initially obtained an HVAC vendor’s credentials to access the outermost portion of our network. We are still investigating how the intruders were able to move through the system using higher-level credentials to ultimately place malware on Target’s point-of-sale registers."

"And, in September 2013, our systems were certified compliant with the Payment Card Industry Data Security Standards, meaning that we met approximately 300 independent requirements of the assessment. Yet the reality is that our systems were breached."

You can read the full text of Mulligan's comments at (Adobe PDF document):
https://corporate.target.com/_media/TargetCorp/global/PDF/Target-SJC-032614.pdf