I'll repeat that: 20 states already have laws that prevent broadband competition. In June 2014, the FCC announced plans to challenge these restrictive state laws that limit competition, and keep your Internet prices high. Blackburn and her corporate supporters want to stop the FCC from doing the right thing to protect consumers -- you.

"... to a general government appropriations bill that would prohibit taxpayer funds from being used by the FCC to preempt state laws governing municipal broadband. While Blackburn thinks the FCC shouldn't interfere with states' rights, she doesn't seem to be concerned about states interfering with municipalities' rights to offer their own broadband services..."

The likely reasons why Blackburn introduced this amendment:

"Blackburn received $10,000 from the National Cable & Telecommunications Association this year and last year, according to OpenSecrets.org. She received $12,500 in contributions from Verizon, $10,000 from AT&T, $7,500 from Comcast, and $7,000 from representatives of Time Warner Cable..."

"Blackburn Works To Prevent FCC From Trampling on States' Right" 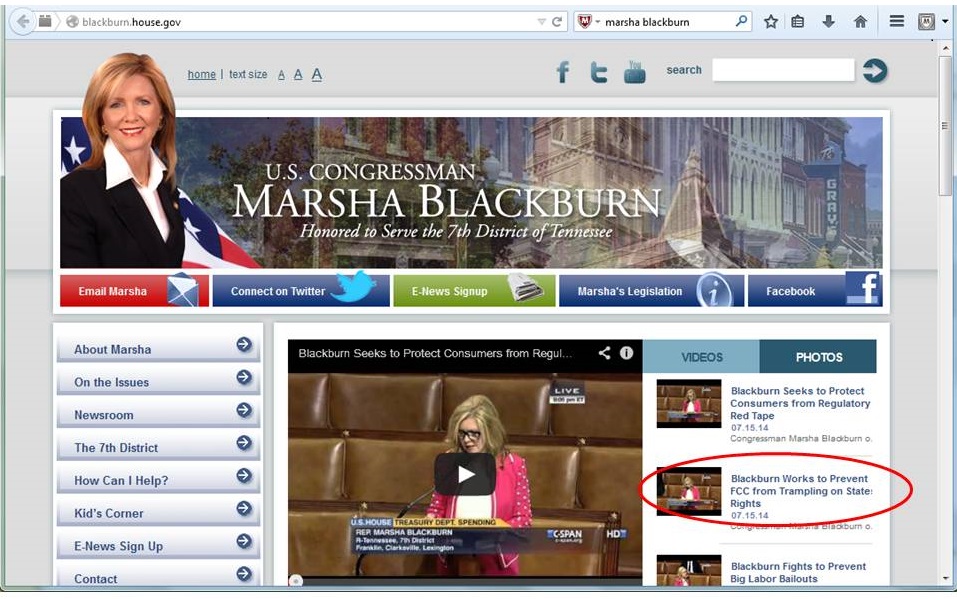 Blackburn either ignores or doesn't care that in many areas of the country, consumers have only one or two choices for high-speed Internet access, called broadband. Local laws in 20 states already prevent broadband competition by stopping cities and towns from building their own (low-cost to users) fiber Internet services. This keeps monthly prices by your Internet Service Provider (ISP) high. This limits the freedom of consumers to build broadband alternatives through their cities and towns. Bad for you; good for your ISP.

"Projects like community mesh networks and mayors’ attempts to bring fiber to their cities should never be illegal or stifled by misguided state laws. On the contrary, they should be encouraged. That’s because community and municipal high-speed Internet projects provide users more options."

Without competition, you have no alternatives should your current ISP treat you badly, provide poor customer service, or raise prices. Some consumers already recognize the benefits that come from the freedom to build local (e.g., municipal) broadband services:

"Consider Chattanooga, Tennessee, a city that has better broadband than San Francisco. Chattanooga is home to one of the nation’s least expensive, most robust municipally owned broadband networks. There, users have access to a gigabit (1,000 megabits) per second Internet connection. That’s far ahead of the average US connection speed, which typically clocks in at 9.8 megabits per second. And in the Mt. Pleasant neighborhood of Washington, DC, residents have built their own community-controlled alternative to expensive Internet companies, and it’s free."

Think about that. Faster Internet access at a lower price. I see nothing wrong with that.

Yet, Blackburn sees that as wrong. By working to keep these local laws in 20 states in place, Blackburn and her supporters are basically saying it is okay for corporations to develop broadband services and not people; that corporations have more rights than people.

And, Blackburn tried to camouflage a pro-big-business, anti-consumer, anti-competition, anti-consumer-freedom amendment in "states rights" language. The last time I heard the "states rights" claim was 50 years ago during the 1964 national campaigns, and when some people opposed the Civil rights Act of 1964 because they wanted to give businesses to arbitrarily refuse service to whomever they wanted. It seems that Representative Blackburn is still stuck in 1964.

What are your opinions of the amendment Blackburn introduced? Of the state laws that already prevent broadband competition?