Since President Obama will mention competition and high-speed Internet services in his 2015 State of The Union address to the nation Tuesday evening, it seemed appropriate to discuss the state of high-speed Internet services (a/k/a broadband) in the United States. The "Cost of Connectivity 2014" annual report by the Open Technology Institute compared Internet prices and speeds in 24 cities around the world. The overall finding:

"... the data that we have collected in the past three years demonstrates that the majority of U.S. cities surveyed lag behind their international peers, paying more money for slower Internet access."

The researchers investigated both home and mobile high-speed Internet prices and speeds. Data was collected between July and September of 2014. The list of cities:

For home usage, the researchers looked at "broadband-only" plans. If a provider didn't offer a broadband-only plan, then they looked for the cheapest bundle (e.g., phone plus Internet, "triple-play bundles of phone, Internet, and television, etc.). Prices in foreign currencies were converted to U.S. Dollars using:

The researchers used the broadband definition by U.S. Federal Communications Commission (FCC): a minimum of 4 Mbps download and 1 Mbps upload. The researchers collected the following information about each broadband service:

Consumers in Asia and Europe get the best value (e.g., highest speeds at the lwest prices):

"Most Asian and European cities provide broadband service in the 25 to 50 megabits per second (Mbps) speed range at a better value on average than North American cities (with a few key exceptions). In addition, when it comes to the estimated speeds a customer could expect to get for $50 in each of the cities we surveyed, the U.S. is middling at best, with many cities falling to the bottom of the pack. Our analysis also finds that, in terms of speed and price, cities with municipal networks are on par with Hong Kong, Seoul, Tokyo, and Zürich and are ahead of the major incumbent ISPs in the U.S."

This merits repeating. The areas in the USA that offer the best value for consumers are municipal broadband networks and not the corporate Internet Service Providers (ISPs). Yet, local laws in 19 states prevent or restrict consumers from building municipal broadband services. Yet politicians in the United States are quick to promote privatization (e.g., corporations are good; government is bad) as a catch-all solution.

And, it is worse for mobile phone and tablet users:

"In the mobile broadband space, USB dongle and wireless hotspot device offerings continue to be expensive substitutes for home broadband connectivity, with consumers in some other countries paying the same price for mobile plans with data caps that are up to as 40 times higher than those offered by U.S. providers."

Providers of home services in cities with the fastest broadband speeds both increased speeds and reduced prices in 2013 compared to 2012, and again in 2014 compared to 2013:

"Virtually every city in this ranking has seen an annual increase in its top speed offering since 2012. In cases where ISPs offer the same speed as last year, those ISPs have tended to lower their prices. For instance, Lafayette, LA charged $999.95 per month for its gigabit service in 2013 and dropped that price to $109.95 per month in 2014. In Mexico City, a 200 Mbps package was available for nearly $100 less than the price offered for that speed by a different provider in 2013. The average download speed of plans in this ranking increased from 233 Mbps in 2012 to around 500 in 2013, and almost 650 Mbps in 2014. Nearly half of all cities in this ranking offer gigabit speeds, and more than two-thirds of all cities offer service over 500 Mbps."

The researchers look at what consumers could get with spending $40 monthly:

"In 2014, five providers offered gigabit service for under $40, up from just one in 2013 and none in 2012. The U.S. cities on this list that are ranked at the middle or higher (Kansas City, KS; Kansas City, MO; and San Francisco, CA) are represented by local, innovative providers who offer competitive alternatives to the services provided by incumbents."

Now, compare the above prices to what you pay and the speed you get. I did. Here in Boston, Comcast charges $66.95 per month for what it calls "Performance Internet." That's the regular price, and not the promotional price. The Comcast website states:

"Restrictions apply. Not available in all areas. Limited to new residential customers. Not available in all areas. Requires subscription to Performance Internet service. Equipment, installation, taxes and fees, and other applicable charges extra, and subject to change during and after the promo. After 12 mos., service charge for Performance Internet increases to $54.99/mo. After promo, or if any service is cancelled or downgraded, regular rates apply. Comcast's service charge for Performance Internet is $66.95/mo. (subject to change). Service limited to a single outlet. May not be combined with other offers. Internet: Wi-Fi claim based on the September 2014 study by Allion Test Labs. Actual speeds vary and are not guaranteed."

So, the site doesn't even disclose what speed consumers get for $66.95 per month. The true price is higher once you add in equipment and taxes. And that is for older cable technology; not fiber. So, it is difficult for consumers to determine the value of Comcast Internet. Yes, Comcast offers a promotion price of $39.99 per month for 12 months, and then the monthly rate increases. I ignored this promotional price since the researchers compared regular rates. You should, too, so you know what the service really costs. And Comcast includes enough caveats that if you change anything in your subscription, regular rates apply.

Verizon FiOS is a fiber Internet service here in Massachusetts. Below are the service's prices: 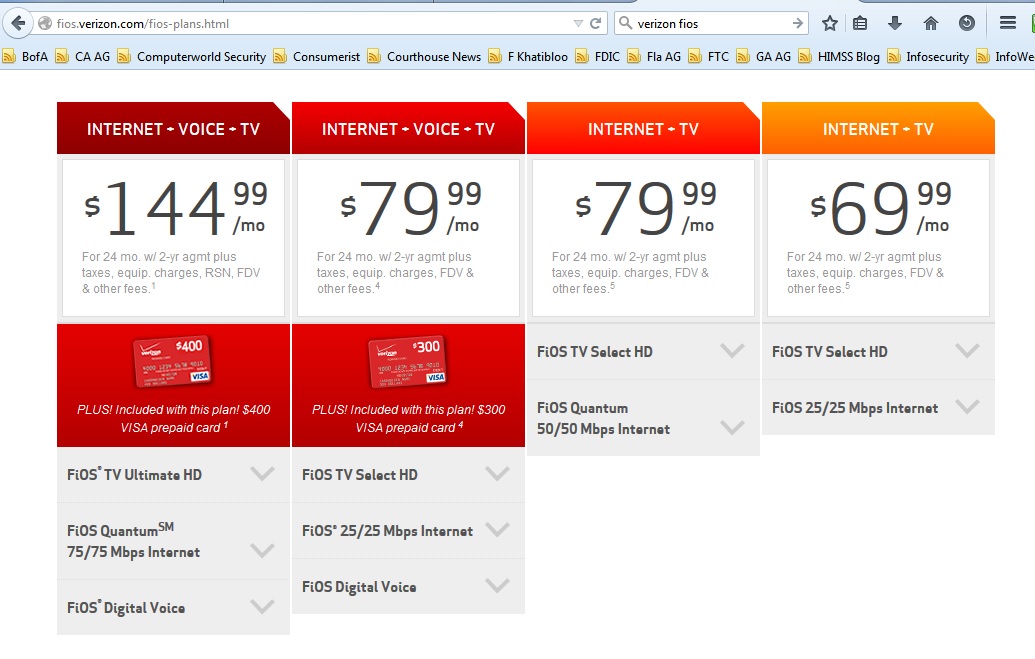 The prices are very high, and the speeds are slower than the above leaders mentioned in the "Cost of Connectivity 2014" report. So, it seems appropriate to ask: are you getting good value (e.g., monthly price divided by download speed) for home Internet where you live? Probably not; unless you live in an area with a municipal service provider. Do you have a state-of-the-art fiber connection? Probably not.

The researchers compared high-speed Internet services between Europe and the USA. They found:

"... median prices are higher in the U.S. for speeds equivalent to those in Europe. Except for the lowest speed tier reported in this graph, the median price in every other tier is noticeably higher for the U.S., indicating that customers pay more for the same broadband packages than their European peers."

"Figure 7 demonstrates the estimated speeds a customer could expect to get for $50 in each of the cities we surveyed. Hong Kong and Seoul are far ahead, with around 300 Mbps at $50, while Tokyo and Paris both hover around 200 Mbps. Most of the U.S. cities cluster between 25 and 45 Mbps, with only San Francisco, CA, and Chattanooga, TN, falling out of that range on the high and low end, respectively. Mexico City ranks last with an average of around 8 Mbps."

Sometimes, consumers seek a certain Internet speed to perform certains tasks. So, the researchers looked at which countries provided the best value with a download speed of 25 Mbps or faster. 25 Mbps download is fast enough to download a short video clip in 1.3 seconds, 10 songs in about half a minute, or a 2-hour video in 13 minutes. That speed allows you to do most things you'd want to do, especially since most mobile devices store your files in the cloud. Once again, the USA lagged other countries:

"Figure 8 demonstrates the estimated monthly price for 25 Mbps in each of the cities we surveyed. The results are largely consistent with our other observations, although in this analysis London comes out at the top of the list at around $24 a month, followed closely by Seoul, Bucharest, and Paris. The U.S. cities are still clustered in the bottom half of the pack, with the exceptions of Kansas City, KS and Kansas City, MO. Notably, Hong Kong drops much lower in this analysis, which reflects the fact that some providers offer speeds ranging from 8 to 100 Mbps at very similar or identical prices."

Feeling proud about American exceptionalism? The next time you hear pundits or politicians profess American exceptionalism, ask them what they are doing to lower your monthly high-speed Internet prices, and speed up your connection, so you get the same (or better) value as consumers in other parts of the world. Write to your elected officials and tell them high-speed Internet prices are too high.

What are your opinions of this report? Of the monthly prices you pay? Do you think that ISPs in the U.S.A. are doing a good job?