Can You Legally Shoot Down a Drone Hovering Over Your Property? 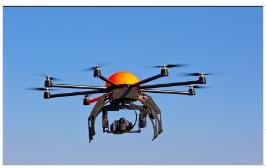 During the coming months and years, this is a question more and more people will ask: can citizens shoot down a drone hovering over your property? Many drones are outfitted with surveillance cameras. One person outfitted a drone with a handgun (video). Some hobbyists outfitted their drones with paintball handguns. Newsweek explored the problem:

"A New Jersey resident who shot down a neighbor’s drone was arrested and charged with possession of a weapon for an unlawful purpose and criminal mischief. After a Californian shot down a neighbor’s drone thinking “it was a CIA surveillance device, ”the drone’s owner won a suit in a small claims court that found the man “acted unreasonably... regardless of whether it was over his property or not." "

Last month, a Kentucky homeowner was arrested after shooting down a camera-equipped drone that hovered directly over his property while his teenage daughter sunbathed in the back yard. You might think that the case should have favored the homeowner, but it didn't. Why? Keep reading.

The legality of shooting down a drone depends upon whether or not it is threatening. The Newsweek article explored the legal issues:

"... unlike pedestrian trespass, your options for removing drones from your property are limited. More troubling is this: How do you know when a drone is truly threatening? As Michael Froomkin, a professor at the University of Miami School of Law, writes, neither the law nor technology has developed far enough to clarify what constitutes a threat and what measure of self-help is appropriate."

So, there is ambiguity about what constitutes a threat and what a reasonable response is. Our laws both lag behind the rapidly advancing technology and inconsistency treat crime versus privacy:

"Ryan Calo, a professor at the University of Washington School of Law, writes, “[T]he lack of a coherent mental model of privacy harm helps account for the lag between the advancement of technology and privacy law.” But not so in criminal law, where tough-on-crime mania routinely drives quick application of broadly phrased statutes to new contexts."

Reportedly, the Federal Aviation Administration (FAA) has responsibility for all civil airspace (e.g., non military) above cities and towns. Based upon the 2012 FAA Modernization and Reform Act, there are different rules for government, non-government, and recreational operators of Unmanned Aircraft Systems (UAS), commonly referred to as drones. The FAA rules for recreational or hobby drone usage:

"Fly below 400 feet and remain clear of surrounding obstacles; Keep the aircraft within visual line of sight at all times; Remain well clear of and do not interfere with manned aircraft operations; Don't fly within 5 miles of an airport unless you contact the airport and control tower before flying; Don't fly near people or stadiums; Don't fly an aircraft that weighs more than 55 lbs; Don't be careless or reckless with your unmanned aircraft – you could be fined for endangering people or other aircraft"

How close is "near" -- 3 feet, 30 feet, 30 yards? That seems vague. Nor do the rules mention privacy, so i guess it is legal to film anyone without consent. And, I guess you can modify your recreational drone with any attachment, as long as you stay under the 55-pound limit.

There already are film festivals for drone operators. The New York City Drone Film Festival debuted in March, and the Flying Robot International Film Festival is scheduled for November 19. Some consumers have already used drones to record landmarks such as the Golden Gate Bridge near San Francisco. Predictably, one recreational drone crashed into the bridge's roadway. While it didn't cause a traffic accident, the risk is there. I'd hate to think that legislators waited until a catastrophe before taking action.

Does this bother you? I hope so. Contact your elected officials and demand updated, effective drone laws that protect both your safety and privacy.

It is not legal for the operator of a drone to film anyone without consent period. To find the limits on what the owner of a drone may do in recordring another and/or their property, one must look to a variety of laws, both civil and criminal, which will vary, depending on the jurisdiction. Criminal sanctions for using a drone to peep into a woman or any person's bedroom or other place where one reasonably and/or customarily has an expectation of privacy would be covered by anyone of several criminal laws, such as the Peeping-Tom, voyeurism, laws and/or criminal trespass. In civil law, there would be the tort of invasion of privacy. Where such voyeurism could reasonably constitute a threat, the laws on assault and/or stalking could, depending on the circumstances, apply. And I am sure that I could think of others.

So those operating drones don't have license to observe and/or record what they wish, nor do they have the right to infringe on another's privacy.

It makes no sense to me that a person is allowed to chop down a limb of a neighbor's tree that is hovering over their property but is not allowed to do the same thing with a drone.

Everyone: a reader alerted me to the fact that you can buy ammunition specifically designed for shooting down drones:
http://gizmodo.com/some-people-in-idaho-made-special-ammunition-to-shoot-d-1724875105

Chanson: thanks for the legal perspective about privacy. That's good to know. However, how is a victim to know whether the hovering drone is recording or not? How is a victim to document a camera-equipped drone hover-over incident in a way to protect himself/herself?