"A pioneer in municipal broadband, Chattanooga developed its fiber network in 2010 with $330 million, paid for with $105 million in federal funds and the rest from bonds. The high-speed access led to direct and indirect economic gains and has been profitable."

Municipal broadband, a/k/a community broadband, is an affordable high-speed Internet Service Provider (ISP) built by the city, town, or municipality. It paid the cost to install fiber-optic cables to every home, not only to luxury buildings or select high-rise offices. A public-private partnership or third party may operate the network. Every resident and business that wants municipal broadband can sign up and easily get it; just like water, electricity, and gas services. Residents use municipal broadband for entertainment, education and online classes, remote work and tele-commuting, video conferencing, home-based businesses, new business startups, and more.

"In the past three years, the city’s unemployment rate has dropped to 4.1 percent from 7.8 percent and the wage rate has also been climbing. Volkswagen’s presence has boosted the manufacturing sector and 10-gigabit speed internet has fueled wage growth, Berke said, speaking at Fiber to the Home Council Americas conference at Gaylord Opryland Resort & Convention Center... “It changed our conceptions of who we are and what is possible,” Berke said... Downtown has doubled its residents and landlords often advertise gigabit speeds that are included in monthly rents... "

Other towns in Tennessee have installed municipal broadband services, including Tullahoma and Clarksville. How fast is 10 gigabits? It is the fastest service available. Some math:

The bottom line: 10-gigabits is a far, far faster than the 25-, 50-, or 100 MB broadband speed you're probably getting from your current Internet Service provider (ISP). Electric Power Board (EPB) provides the municipal broadband service in Chattanooga. Besides the blazing 10 gigabit speed, it also offers slower speeds: 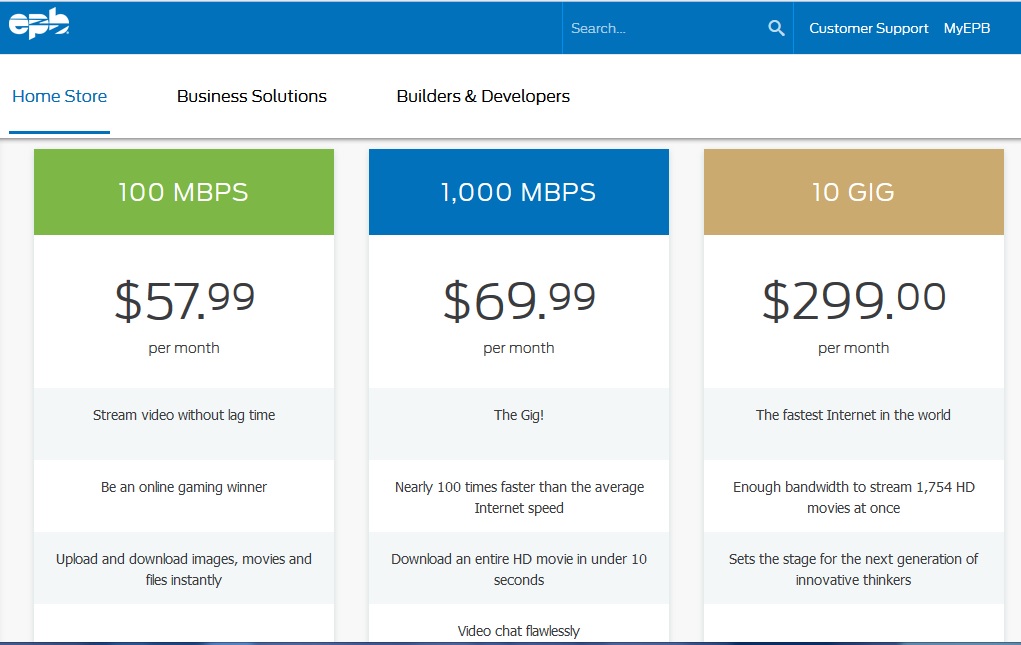 I compared prices. Comcast Xfinity in Boston costs $79.95 per month for 75 megabytes speed. That's both slower and more expensive. Plus, it's the old coaxial cables and not the new fiber optic technology. Old things usually cost less. Read and learn more about community broadband networks.

This worldwide study found that municipal or community broadband networks provide consumers with the best value (e.g., highest speeds at the lowest prices via wired lines). Regular readers of this blog are aware that there are 19 states with laws that prevent local towns and cities from forming their own municipal broadband networks. These laws contribute to the lack of competition, and keep your monthly Internet prices higher than otherwise. Some States Attorneys General are complicit with limiting competition.

Several politicians and Presidential candidates support these states' laws that limit competition, under the guise of "states rights" freedoms. This subterfuge helps their corporate donors, and limits (and ignores) both the freedoms and rights of people in local cities and towns to get and develop their own faster, more affordable high-speed Internet services.

Some politicians tried to correct this in 2015 with the Community Broadband Act. Sadly, that legislation has gone nowhere in Congress. Contact your elected officials today and tell them you want municipal broadband now.

Now you know why I discuss municipal broadband in this blog. Consumers are missing out on a sweet deal.

Posted at 10:20 AM in Government, Internet Access, Retail | Permalink | Comments (7)

North Carolina has sued to overturn the FCC's, decision, supra, but, now that the FCC has reclassified broadband as a telecommunications services and especially in light of the U.S. D.C. Circuit Court of Appeals' recent decision upholding that classification and the FCC's authority to do it, it is unlikely that North Carolina's challenge to the FCC's preemption of state laws restricting Community Broadband will prevail.

Therefore, the laws of the 19 states or of any state that currently or seeks to prohibit and/or restrict Community Broadband are or would be almost certainly be null and void and without effect.

If I have a moment later today, I may rundown the disposition of State of North Carolina v. The FCC and the United States, U.S. 4th Circuit of Appeals, Case No. 15-1506.

Thanks for the clarification. I do my best at reporting, but like most consumers I am not an attorney. I try to make sense of events, but it should not be this difficult. Rapid change on this topic is underway in the court system, so that may cause some confusion. Perhaps, some lawyers specializing in telecommunications will comment.

The FCC's decision regarding TN and NC was highly specific to the barriers in each state. Even if the FCC is victorious in court, cities in other states would have to challenge their state's ban/barrier at the FCC. That will happen under a new FCC Chair, no idea if that FCC would make the same finding as Wheeler's did.

Reclassifying Internet access as Title II has no impact on these state policies. The question at hand has to do with whether states creating onerous barriers to municipal networks is an attempt to regulate interstate commerce. The courts previously found that the '96 Telecom Act did not preempt state authority to prohibit muni networks in Nixon v. Missouri.

Thanks to Mr. Christopher Mitchell at CommunityNets for the clarification. I'd reached out to him earlier today to get an explanation from a broadband expert. His qualifications:

"Christopher Mitchell is the Director of the Community Broadband Networks Initiative with the Institute for Local Self-Reliance. Mitchell is a leading national expert on community networks and speaks at conferences across the United States on telecommunications policy. He was honored as one of the 2012 Top 25 in Public Sector Technology by Government Technology, which honors the top “Doers, Drivers, and Dreamers” in the nation each year. That same year, the National Association of Telecommunications Officers and Advisors named ILSR the Broadband Organization of the Year. On a day-to-day basis, Mitchell runs MuniNetworks.org, the comprehensive online clearinghouse of information about community broadband..."

You can read more at:
https://muninetworks.org/

If you haven't visited this site, I strongly recommend it. Lots of information about community broadband networks.

However, we depart from each other on how broadly the FCC's decision would be precedent for similar laws by the remaining 19 states to enforce any laws that in any way bar, hinder, or restrict the "broadband deployment, investment and competition, and conflict with the FCC’s mandate to promote these goals." Quoting from the FCC's news release on its decision. The FCC goes on to explain that "Under federal law, a federal agency may preempt state laws that conflict with its regulations or policies so long as it is acting within the scope of its authority. There is a clear conflict, the Order finds, between Section 706 of the Telecommunications Act of 1996, which directs the FCC to take action to remove barriers to broadband investment and competition, and provisions of the Tennessee and North Carolina law that erect barriers to expansion of service into surrounding communities, including unserved and underserved areas. The Order concludes that preemption will speed broadband investment, increase competition, and serve the public interest." So the goals that a state may not interfere with are the expansion of deployment, investment in, and competition in the markets for broadband services. And the reasoning of the Order is that any act of a state that does so bar, restrict, or even hinder those goals is impermissibly in conflict with Section 706 of the Telecommunications Act, which directs the FCC to remove any such hinderance to deployment, investment in, and competition in broadband services.

While not formal precedent, this suggests that while the present panel of FCC commissioners is in place and provided that the three in the majority are of the same mind now as then, they will similarly conclude that, upon the petition from a party in interest, that any of those other states’ laws are a hinderance to the deployment, investment in, and competition in the market for broadband services in violation of Section 706, and must, therefore, also be preempted. And I think that it would be malpractice to advise any client otherwise.

I have taken the time to study Nixon v. Missouri (Nixon), and it is clear that decision is distinguishable on at least two grounds. First, the petitioner in both the North Carolina and Tennessee is not a division of either of those states but is private electric utility that wishes to provide broadband service through those two states, without the geographic and other restrictions on broadband service that those two states' laws impose. Nixon, applies only to divisions of the state, e.g., local governments, that provide telecommunications service. Here, the effort is admittedly a mix one of public and private partnership, but that factual context is outside of what was consider in Nixon, so that Nixon is, on that grounds, distinguishable and, thus, not controlling precedent.

The second problem with Nixon is that it is that it is outmoded. Since the Nixon decision and holding that the phrase "any entity" does not comprehend a state's political subdivisions, Congress has modified the Telecommunications Act (Act) to add sections, Sections 1301-1305 (Chapter 12 Broadband), which strongly suggest that when it used "any entity" in the context of Section 253 of the Act, it did and does, indeed, intend to included the political subdivisions of the state in the term "any entities."

In Section 1301, Congress finds that:

"(1) The deployment and adoption of broadband technology has resulted in enhanced economic development and public safety for communities across the Nation, improved health care and educational opportunities, and a better quality of life for all Americans."

And in subparagraph (2) that:

"(2) Continued progress in the deployment and adoption of broadband technology is vital to ensuring that our Nation remains competitive and continues to create business and job growth."

Then in Section 1302(a), a.k.a as Section 706, Telecommunications Act of 1996, Pub. L. No. 104-104, § 706(a), 110 Stat. 56, 153, Congress expressly commands the FCC and state commissions with regulatory authority over telecommunications shall encourage deployment of advanced telecommunications services and shall do so "by utilizing, in a manner consistent with the public interest, convenience, and necessity, price cap regulation, regulatory forbearance, measures that promote competition in the local telecommunications market, or other regulating methods that remove barriers to infrastructure investment."

The Commission and each State commission with regulatory jurisdiction over telecommunications services shall encourage the deployment on a reasonable and timely basis of advanced telecommunications capability to all Americans (including, in particular, elementary and secondary schools and classrooms) by utilizing, in a manner consistent with the public interest, convenience, and necessity, price cap regulation, regulatory forbearance, measures that promote competition in the local telecommunications market, or other regulating methods that remove barriers to infrastructure investment."

Therefore, in my view, Nixon v. Missouri is not applicable to invalid the FCC's order preempting North Carolina and Tennessee's laws restricting broadband service, when one of its local government has the authority, but for state's prohibition, and the means to do Community Broadband.

And there is one more thing: Even if arguendo, we concede that Section 1302(a), supra, does not modify "any entity" so that a state’s political subdivisions are now included in the phrase "any entity," Section 1302(a), independently of Section 253, so expands the scope and power of the FCC to remove all barriers to the deployment and investment in broadband service, and to at least effective competition in the markets for broadband service that Section 1302(a), independent of Section 253, does and is sufficient to authorize the FCC's Order preempting the laws in North Carolina and Tennessee that restricted the deployment, investment in, and/or vigorous competition in broadband, and for that reason alone, Nixon's precedent on the meaning of “any entity” has been superseded and made irrelevant by the new, greater, and expanded powers of the FCC to remove all barriers to broadband, as set forth in Section 1302(a).