Shooting In Orlando: Hate Crime, Terrorism, Or Both?

Was the mass murder this past weekend in Orlando (Florida) a hate crime or terrorism? As a society, we've been here before, too many times. We've asked ourselves this question recently after a church shooting, and after a clinic shooting.

So, it seems appropriate to revisit the definitions. From the U.S. Federal Bureau of Investigation (FBI) website:

Hate Crime: "A hate crime is a traditional offense like murder, arson, or vandalism with an added element of bias. For the purposes of collecting statistics, the FBI has defined a hate crime as a “criminal offense against a person or property motivated in whole or in part by an offender’s bias against a race, religion, disability, sexual orientation, ethnicity, gender, or gender identity.” Hate itself is not a crime—and the FBI is mindful of protecting freedom of speech and other civil liberties."

International Terrorism: "... means activities with the following three characteristics: 1) Involve violent acts or acts dangerous to human life that violate federal or state law; 2) Appear to be intended (i) to intimidate or coerce a civilian population; (ii) to influence the policy of a government by intimidation or coercion; or (iii) to affect the conduct of a government by mass destruction, assassination, or kidnapping; and 3) Occur primarily outside the territorial jurisdiction of the U.S., or transcend national boundaries in terms of the means by which they are accomplished, the persons they appear intended to intimidate or coerce, or the locale in which their perpetrators operate or seek asylum.*

Domestic Terrorism: "... means activities with the following three characteristics: 1) Involve acts dangerous to human life that violate federal or state law; 2) Appear intended (i) to intimidate or coerce a civilian population; (ii) to influence the policy of a government by intimidation or coercion; or (iii) to affect the conduct of a government by mass destruction, assassination. or kidnapping; and 3) Occur primarily within the territorial jurisdiction of the U.S."

Some politicians want to classify the event as one type (e.g., terrorism) and not another (e.g., hate crime), while ignoring the related issues: the gun violence continues without effective background checks and the assault-style weapon used in Orlando is fast becoming mass shooters' weapon of choice. There's also the long history of anti-LGBT violence in LGBT clubs.

When you consider the above definitions, the following variations seem possible: 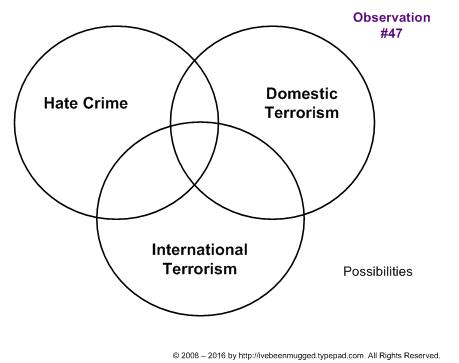 Thoughts? Comments? Fed up? Find your senator, and find your representative.

Readers may find this study interesting:

And, you will hear a lot about the terror gap:

"What is the Terror Gap? The federal government currently has no authority to block firearm sales to international or domestic terror suspects. This gap in our laws is a glaring public safety concern, as DOJ remains powerless to stop individuals on the terror watch lists from getting armed—even though many are considered too dangerous to board a plane."

The problem with the so called "Terror Gap" is that it isn't a terror gap at all but is a suspicion gap. And in the United States, we should not and, as a matter of constitutional law, may not abridge a citizen's Second Amendment rights or any other right on merely suspicion. That the government somehow constitutionally becomes aware that a person applying for a firearm detests, for example, African Americas or homosexuals and may evidence that hatred by subscribing to certain racist or anti-homosexual websites and then deems that person suspicious or a potential threat is not grounds to say no his application for a weapon. It takes something more; it takes a manifestation of his hatred in a concrete act that violates criminal law or that at least constitutes a reasonably imminent threat of harm so that a reasonable person would be justified in taking steps to defend himself or law enforcement would be justified in acting to neutralize the threat. But, of course, if the person exhibited such a manifestation, the government would probably be able to indict and try him for committing a crime or have him judge mentally incompetent to own or even possess a firearm. So a suspicion, the so called "Terror Gap," isn't enough and isn't even terror, for, if it were terror, the person would be arrested and tried at trail, because terror is a crime.

So, as matter of law, the government suspecting a citizen of terror isn't enough, nor should it be, because the government's suspicions maybe unreasonable or erroneous. For example, two people visit a Neo-Nazi website. The government somehow constitutionally learns of it and who those two people are and, as a result, puts both on the Terror-Gap list of suspicious people, who it will not let own or possess a firearm based on nothing more than suspicion. Neither has done anything that is criminal, but the government refuses to let either have a gun. It turns out, however, that one of the people is a Jewish, tenured Harvard professor, who is studying groups that hate others based on race, while the other is a member of the Ku Klux Klan.

May the government deny either the right to own or posses a gun? It may not, and the reason does not turn on either person's inclinations or reasons for viewing the Neo-Nazi website; it is because neither person has done anything that is criminally actionable. What both have done is exercise their First Amendment rights: The scholar has exercised his First Amendment right to study what he likes as he likes, provided he does not do so in a way that constitutes a crime; while Neo-Nazi is exercising his First Amendment right to hate who he please, as long as his manifestations of that hatred do not constitute a crime or violate another's rights. In America, one is entitled to one's hates, just as one entitled to one's loves, provided that the manifestations of both are otherwise legal.

So in the U.S., the government's suspicions aren't sufficient to deny someone their constitutionally protected Second-Amendment right to own and/or possess a firearm. And because the Terror Gap is nothing more than suspicion, it is insufficient for the government to abridge of a person's right to own or possess a firearm, unless and until that person commits a crime or manifest some mental disability that would permit a probate court to proscribe his right to bear arms, based on his professionally diagnosed mental disease, which would make him a danger to others or incapable of responsibly owning or possessing a firearm.

There are a lot of allegedly smart people in Congress. I am hopeful that they can figure out a way to craft legislation that keeps guns out of terrorists' hands without violating the rights of citizens per the U.S. Constitution.

Consider... to fight alleged voting fraud, conservatives in many states, with the help of the U.S. Supreme Court, have enacted laws to restrict the 15th Amendment... the right to vote. No more same day registration, tougher ID laws, and fewer voting locations. So, if they really want to keep guns out of the hands of terrorists, politicians have demonstrated the capability and mastery of the art of enacting restrictions to Constitutional Amendments... and could do so with the 2nd Amendment, too.

Results from yesterday's voting in the U.S. Senate: