Social Networking Sites With The Largest Number of News Users

Recently, some friends and I were discussing the wisdom of getting your news from social networking websites (e.g., Facebook, Twitter, Snapchat, Youtube, LinkedIn, etc.) instead of directly from news media sites. Apparently, many consumers get their news from such sites.

Pew analyzed which social networking sites were used the most for news, and whether consumers used multiple sites to obtain news. The Pew Research Center found:

The corresponding statistics are 23 percent for Instagram, 21 percent for Youtube, 19 percent for LinkedIn, and 17 percent at Snapchat. The implications:

Who are the news users at the five largest social sites with news users? The users vary by site:

"... while there is some crossover, each site appeals to a somewhat different group. Instagram news consumers stand out from other groups as more likely to be non-white, young and, for all but Facebook, female. LinkedIn news consumers are more likely to have a college degree than news users of the other four platforms; Twitter news users are the second most likely." 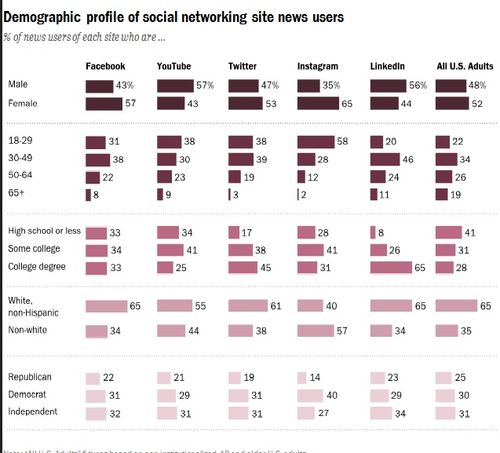 Some of you are probably wondering about Google+ and Pinterest. Pew removed three social media sites because:

"... Pinterest, which has been shown to have a small portion of users who use it for news; Myspace, which has largely transitioned to a music site; and Google+, which through its recent transformations is being phased out as a social networking site."

It seems that the American public is descending into several artificial realities--Matrices if you will, in reference to the 1999 film, The Matrix, starring Keanu Reeves and Laurence Fishburne--where their view of the world is constructed not by unbiased reporting of the news but by editorial decisions about what to report and how to report it that both shapes and conforms to their respective readers' prejudices, bigotries, and values. That isn't news reporting. That is simply propaganda and indoctrination.

The motives for its among the news media, which must now include social media, (hereinafter "Newspapers") are varied. Sometimes the publishers wishes to promulgate his biases and prejudices and values; sometime it is simply to cater to their respective readers' prejudices so that they, the readers, will continue to patronize that particular news outlet. But it is too rare that the purpose of reporting on at least controversial issue is to inform so that a reader has all of the relevant facts needed to makeup his own mind on the truth and importance of an issue. Now Newspapers report on hot-button issues for purposes of either profiting from developing and maintaining an audience or for proselytizing on an issue or both, as Facebook recently demonstrated when it was caught suppressing conservative news, while promoting news that advanced liberal causes. And it is well known that Google and Bing profile their respective users so as to present them with search results that will induce them to spend more time on their respective websites. And the same can be seen in all of the major Newspapers, whether the New York Times and ABC News, for example, on the Left or Fox News and the Wall Street Journal, for example, on the Right. So our Newspapers have become partisans and propagandist for either profit or proselytizing.

None of this is new, because Newspapers have always been biased for the purpose of profit or proselytizing. And there have been times in American and, indeed, world history when Newspapers have been much worse than they now are in America, as publishers have always sought to proselytize or profit with biased reporting. What is troubling is when that biased reporting so dominates news reporting that it endangers democracy by fomenting folly and prejudice and their resulting dissension, instead of reporting the news that citizens need to effectively and wisely govern themselves in a democracy.

Such bad news reporting is gravely damaging, if not ultimately lethal, to a democracy. President Jefferson explained this: "The basis of our government being the opinion of the people, the very first object should be to keep that right; and were it left to me to decide whether we should have a government without newspapers, or newspapers without a government, I should not hesitate a moment to prefer the latter. But I should mean that every man should receive those papers and be capable of reading them." Thomas Jefferson's letter to Colonel Edward Carrington (16 January 1787) Lipscomb & Bergh ed. 6:57. The job of Newspapers then is so well inform the people with relevant facts and unbiased reporting that they have wise opinions based on truth and can thus wisely govern themselves. All biased and/or prejudiced reporting defeats that purpose to the extent of prejudice and biased reporting.

So when a nation's Newspapers are not sufficiently professional and unbiased in their reporting, then the opinions of the people become corrupted with prejudice and bias, rather than informed and edified by fact and truth. The result is what we see today: Each group, liberals and conservatives, exclusively resorting to their group's preferred reality, their respective Matrix, to reinforce and fortify their prejudices and bigotries and follies, their false pretensions of moral superiority, and their dislike, if not hatred, of the other. And thus our democracy and a great many others in Europe have become strained with fractious, internecine disputes on controversial issue and afflicted with the bad consequences of foolish policy. And instead of correcting folly and prejudice, our Newspapers abet and foment it.

The question and danger for any democracy is whether its follies have become so pernicious and its disputes have become so fundamental that prosperity and/or the common grounds and bonds of unity have become so impaired that democracy is strained to the breaking point, as last happened here in 1861. Our Newspapers are only adding to the intensity of those stresses and strains on our democracy.