During the holiday weekend, CNN reported:

"Five months before Saturday's 5.6 magnitude temblor in central Oklahoma, government scientists warned that oil and natural gas drilling had made a wide swath of the country more susceptible to earthquakes.

The U.S. Geological Survey (USGS), in a March report on "induced earthquakes," said as many as 7.9 million people in parts of Kansas, Colorado, New Mexico, Texas, Oklahoma and Arkansas now face the same earthquake risks as those in California. The report found that oil and gas drilling activity, particularly practices like hydraulic fracturing or fracking, is at issue... Saturday's earthquake spurred state regulators in Oklahoma to order 37 disposal wells, which are used by frackers, to shut down over a 725-square mile area... The quake that struck Saturday is at least the second of its size to affect central Oklahoma since 2011."

Given the earthquake activity, the closed wells, and damage to business and residential properties, it seems wise to read the March 2016 report by the USGS, which discussed at the risks and potential for damage from both natural and induced earthquakes:

"The most significant hazards from induced seismicity are in six states, listed in order from highest to lowest potential hazard: Oklahoma, Kansas, Texas, Colorado, New Mexico and Arkansas. Oklahoma and Texas have the largest populations exposed to induced earthquakes."

So, that's a list you wouldn't want to see mention your state. Nor would you want to see your state at the top of the list. The USGS report included maps highlighting specific areas with risks ranging from less than one percent to a 12 percent probability. The report also stated:

“In the past five years, the USGS has documented high shaking and damage in areas of these six states, mostly from induced earthquakes... the USGS Did You Feel It? website has archived tens of thousands of reports from the public who experienced shaking in those states, including about 1,500 reports of strong shaking or damage.” In developing this new product, USGS scientists identified 21 areas with increased rates of induced seismicity. Induced earthquakes have occurred within small areas of Alabama and Ohio but a recent decrease in induced earthquake activity has resulted in a lower hazard forecast in these states for the next year. In other areas of Alabama and small parts of Mississippi, there has been an increase in activity, and scientists are still investigating whether those events were induced or natural."

Lets unpack this. First, risk varies based upon where you live. Second, risk varies with time. The USGS risk models include both one-year and 50-year outlooks. So, the risk in an area may be low during the coming year, but very different (e.g., higher) when considering what might happen during the next 50 years. That sounds a lot like floods. A huge, devastating flood may not happen often -- perhaps once every 50 or 100 years, but when it does... the damage and costs are considerable. Third, you don't need to live near or adjacent to a well to be affected.

Below is the USGS map with 21 susceptible areas: 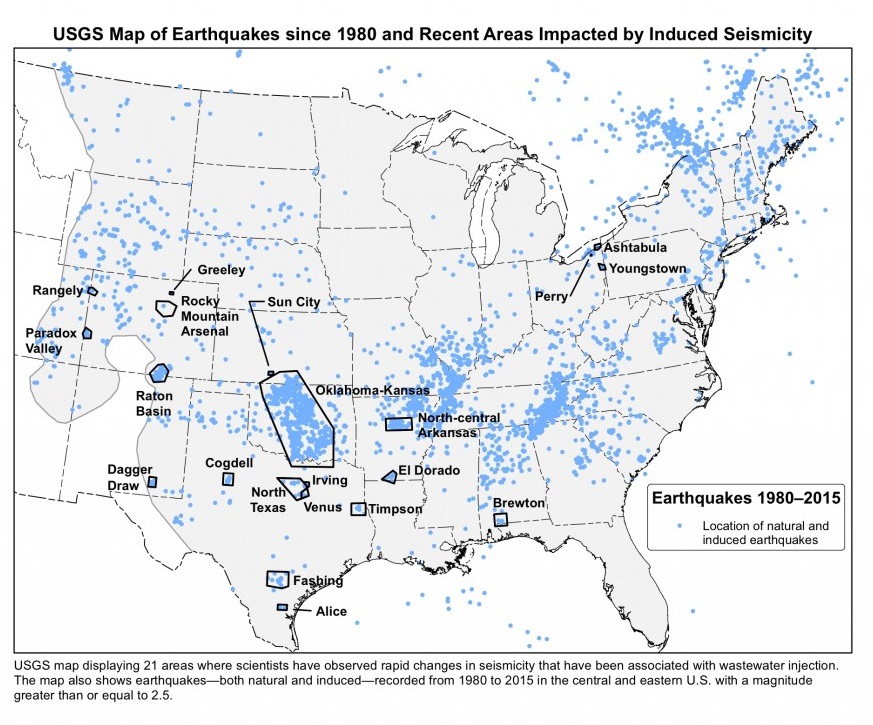 A USGS report in 2015 titled, "6 Facts About Human-Caused Earthquakes" described the types of human activities:

"Injecting fluid underground can induce earthquakes, a fact that was established decades ago by USGS scientists. This process increases the fluid pressure within fault zones, essentially loosening the fault zones and making them more likely to fail in an earthquake... even faults that have not moved in historical times can be made to slip and cause an earthquake... There are several purposes for injecting fluid underground. The three main reasons are wastewater injection, hydraulic fracturing and enhanced oil recovery. Within the United States, each of these three activities has induced earthquakes to varying degrees in the past few years. All three types of wells used for these purposes are regulated under the Safe Drinking Water Act with minimum standards set by the U.S. Environmental Protection Agency. Additional regulations vary by state and municipality. Other purposes for injecting fluid underground include enhanced geothermal systems and geologic carbon sequestration."

That same report also mentioned this:

So, to be affected you don't have to live near or adjacent to a disposal well or injection point. Alert readers will notice that the EPA's classification system for wells and injection points largely mirrors the different types of human activities... which really seem to be mostly corporate activities.

Do you live in or near one of the 21 areas? What are your opinions?