The Facebook social networking site introduced on October 28, 2016 a new feature where provides its voting-age users with previews of candidates and questions. The site presented users with the following ad: 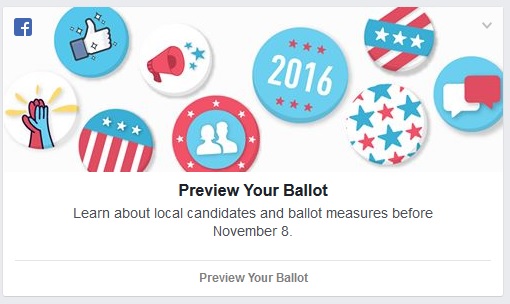 Like other ads in the site, users can disable the ad. Users that select the "Preview Your Ballot" link will see next three pop-up pages which explain the new feature: 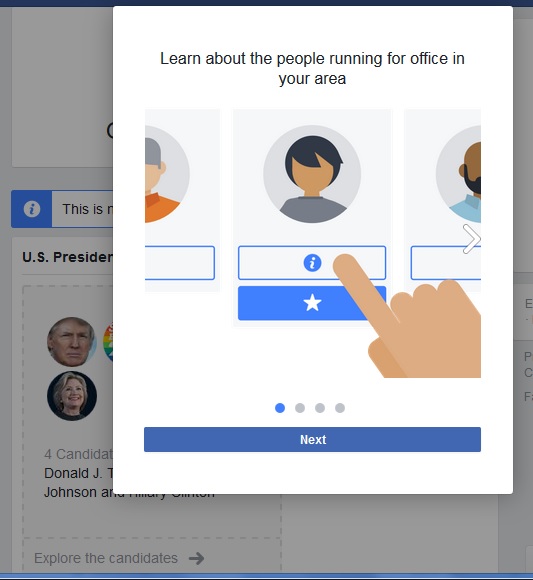 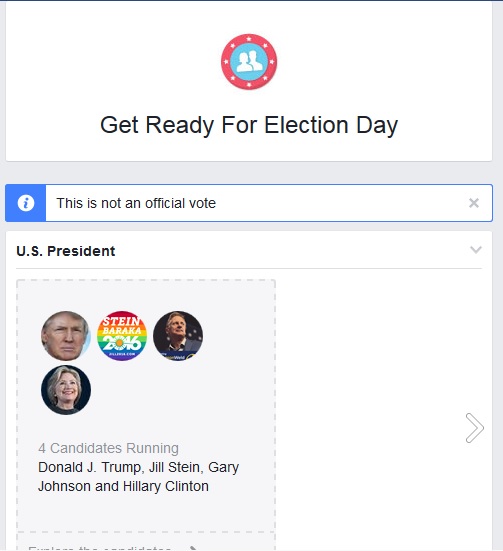 Why did Facebook introduce this new feature? According to a popup within the feature:

"You're seeing this because you may be in a state that has a voter registration deadline or election coming up. We want to help people have their voice heard in the elections this year, so we're showing this message to people who are old enough to vote - no matter who they support.

We send reminders about voting every now and then. If you'd rather not see these in the future, click or tap the in the top right corner of the reminder and select Hide Reminder, then Hide all voting reminders."

"Voting is important... we’re encouraging civic participation. We want to make it easier for people who want to participate to do so, and to have a voice in the political process... Today, we’re introducing a new feature that shows you what’s on the ballot — from candidates to ballot initiatives. We also show you where the candidates stand on the issues...Not all states in America mail out sample ballots ahead of an election. This can make it challenging to find comprehensive information about the questions you’ll be expected to consider when you walk into the voting booth. Thanks to data gathered from election officials by the nonpartisan Center for Technology and Civic Life (CTCL), we can present you with a preview of the ballot you’ll receive on November 8. If you notice an issue with the CTCL data, we’ve built in a way for you to provide feedback and help correct the dataset.

I first saw Facebook's new Elections Ballot feature on November 2, 2016 -- five days after the announcement, and less than 6 days before the November 8 Elections Day. You'd think that Facebook would have introduced this feature sooner; ideally, as soon as the main parties had nominated their candidates. Facebook didn't. Not good. And, the feature's availability may be too late for early voters.

What else is happening with this new feature? Several items are worth mentioning. First, executives at Facebook are probably well aware that two-thirds of the site's users get their news at the site. This new feature is clearly an attempt to keep users within the Facebook bubble: increase the amount of time on site and the number of pages viewed within the site.

Second, the accuracy of the new feature is suspect. I have never shared my residential address with Facebook, so the elections feature displayed 4 questions when there are actually 5 where I live. The fifth question is a local ballot iniative. Users like me, who haven't provided street address information, may get a wrong impression of what's on their ballot -- if they fail to read the fine print. And, we know that too many consumers never read the fine print.

Third, the local candidates and ballot questions are a slick way for Facebook to force users to share their residential street address information. Fourth, the new feature is an opportunity to capture users' voting information. Of course, not the official ballots, but the next closest thing. Users can select which candidates are their Favorites and share it with their Friends: people, coworkers, classmates, family, neighbors, and others they are connected to at the site. Favoriting a candidate within this new feature seems like a pretty explicit and accurate proxy instead of an official ballot: 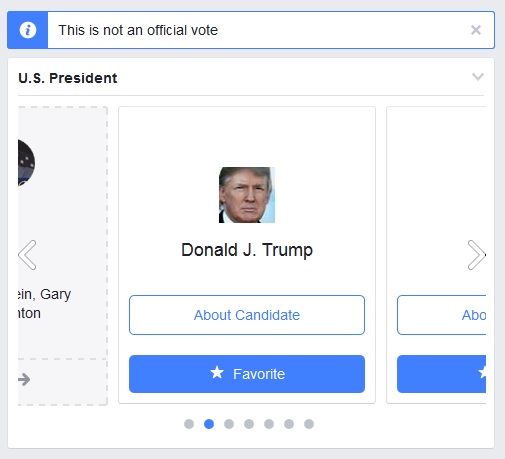 Fifth, armed with this ballot information about its users, Facebook can probably charge more to advertisers (e.g., political campaigns, political action committees, pollsters, data brokers) interested in purchasing information about voting populations and/or buying targeted ads at the site. Consider this report by BuzzFeed from November 2014:

"At some point in the next two years, the pollsters and ad makers who steer American presidential campaigns will be stumped: The nightly tracking polls are showing a dramatic swing in the opinions of the electorate, but neither of two typical factors — huge news or a major advertising buy — can explain it. They will, eventually, realize that the viral, mass conversation about politics on Facebook and other platforms has finally emerged as a third force in the core business of politics, mass persuasion.

Facebook is on the cusp — and I suspect 2016 will be the year this becomes clear — of replacing television advertising as the place where American elections are fought and won. The vast new network of some 185 million Americans opens the possibility, for instance, of a congressional candidate gaining traction without the expense of television, and of an inexpensive new viral populism. The way people share will shape the outcome of the presidential election."

It seems that day has arrived. Shape the conversation and outcome, indeed. It's all driven by data -- big data -- data mining.

"How you vote is a personal matter, and we’ve taken steps to make sure that you have utmost control over your plan. After you make a selection, you have to choose who you want to be able to see it (“Only me” or “Friends”). For example, you may want to be private about your choice for president, but share with friends your pick for a congressional race or a ballot initiative."

The language in the announcement seems to confusingly refer to the Facebook feature as voting, when it isn't. Do all of your friends need to know your voting preferences? What about friends with Facebook profiles that are open to the general public? In the latter case, anybody wandering in can view your voting information. Is that what you really want?

I visited the CTCL website and found it underwhelming and lacking key information to uderstand what this organization really is and does. Not good.

What are your opinions of Facebook's new elections and ballot feature?

While it is great to encourage people to exercise their right to vote, that isn't all that Facebook is doing by encouraging its users to vote. First, let's understand what Facebook is: It is a profit-making company that almost always puts profit ahead of any other consideration, that is, it is greedy, and its current senior management is avowedly and demonstrably liberal. Both of those things determine how Facebook uses its vast power to influence the outcome of our elections.

The Editor has it partly right, when he notes that Facebook will collect and trade information about its users' profiles and political favorites and likes and other indications of preference with other for the best price that it can get. And note, that while you may be able to somewhat restrict other users from seeing your profile and preferences, you can never prevent Facebook from knowing that information, which it then uses to pursue its ends, one of which is making a lot of money.

But Facebook's greed is held just short of being pathological in that it is restrained by the liberal politics of its senior management. Earlier this years, Facebook was caught biasing what it users see on Facebook by de-emphasizing content, emphasizing content, censoring content, etc. and doing all of that in a way that was biased against conservative views or was designed to improve Facebook’s image with mostly liberal voters. So the bubble that users of Facebook live in is a liberal one. Though that is fine for many users, it is not for many others, such as conservatives, who find themselves segregated in their isolated communities. Also Facebook does not automatically share with one's Facebook friends what one post, reserving to itself the right to decide what to share with one's friends.

And even if it would be laudable for Facebook to encourage people to vote, even there Facebook is exhibiting its liberal bias, because Facebook knows that its population of users are more likely to vote for Hillary than for Trump, so turning out the Facebook vote is more likely to benefit Hillary Clinton, especially given the way that it, Facebook, creates an environment that presents a world that is more favorable for its liberal views.

So there is nothing new under the sun; though Facebook exploits a new medium, it is no different than today's legacy media (e.g., newspapers, TV shows and ads, etc.) and that of yesteryear in its attempt to both profit from its knowledge about how its users, as voters, will vote and its knowledge of what can influence them to vote in particular ways, and in its efforts to influence its users’ votes, according to its editorial preferences. Though William Randolph Hearst would abhor the liberal politics, he would immediately recognize, at least in its broad outlines, Facebook's purposes of profiting from its knowledge of voters and influencing elections according to its political and moral preferences.