Residents in nine states wanting to travel domestically via commercial airlines may need to obtain alternative identification documents. Why? While new identification requirements will become effective in 2018, starting in 2017 federal agencies may no longer accept driver's licenses from these nine states.

On December 12, the Department of Homeland Security (DHS) announcement explained:

"The Transportation Security Administration (TSA) will begin posting signs at airports this week notifying travelers that beginning January 2018 it will start enforcing REAL ID requirements at airport security checkpoints, meaning that travelers seeking to use their state-issued driver’s license or identification card for boarding commercial aircraft may only use such documents if they are issued by a REAL ID compliant state or a non-compliant state with an extension."

The U.S. Congress passed the REAL ID Act in 2005 to establish minimum security standards for state-issued driver’s licenses and identification cards. The Act prohibits federal agencies, including the TSA, from accepting licenses and identification cards for certain official purposes (e.g., boarding federally regulated commercial aircraft) from states that do not meet these minimum standards and have not received an extension for compliance from DHS.

If the nine states change their procedures, then the government may grant each state an extension or approval, as warranted. The nine states which did not receive extensions for 2016 or 2017 are Kentucky, Maine, Minnesota, Missouri, Montana, Oklahoma, Pennsylvania, South Carolina, and Washington. So, starting January 30, 2017 federal agencies and nuclear power plants may not accept driver's licenses and state IDs from these nine states for identification. Federal officials may continue to accept Enhanced Driver’s Licenses from Minnesota and Washington.

See the DHS site for the compliance status for all states and territories. See the TSAa.gov site for a complete list of identification documents accepted at TSA checkpoints. Below are the notices you may see while traveling through airports. 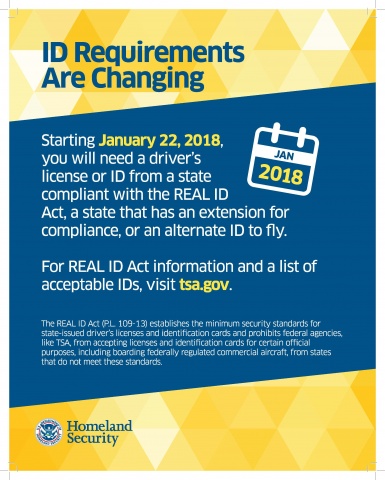 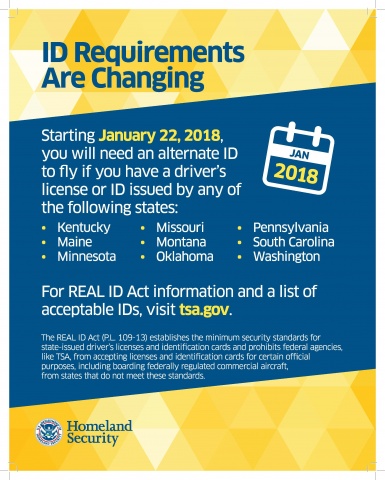 pretty soon they will all want us to be chipped!