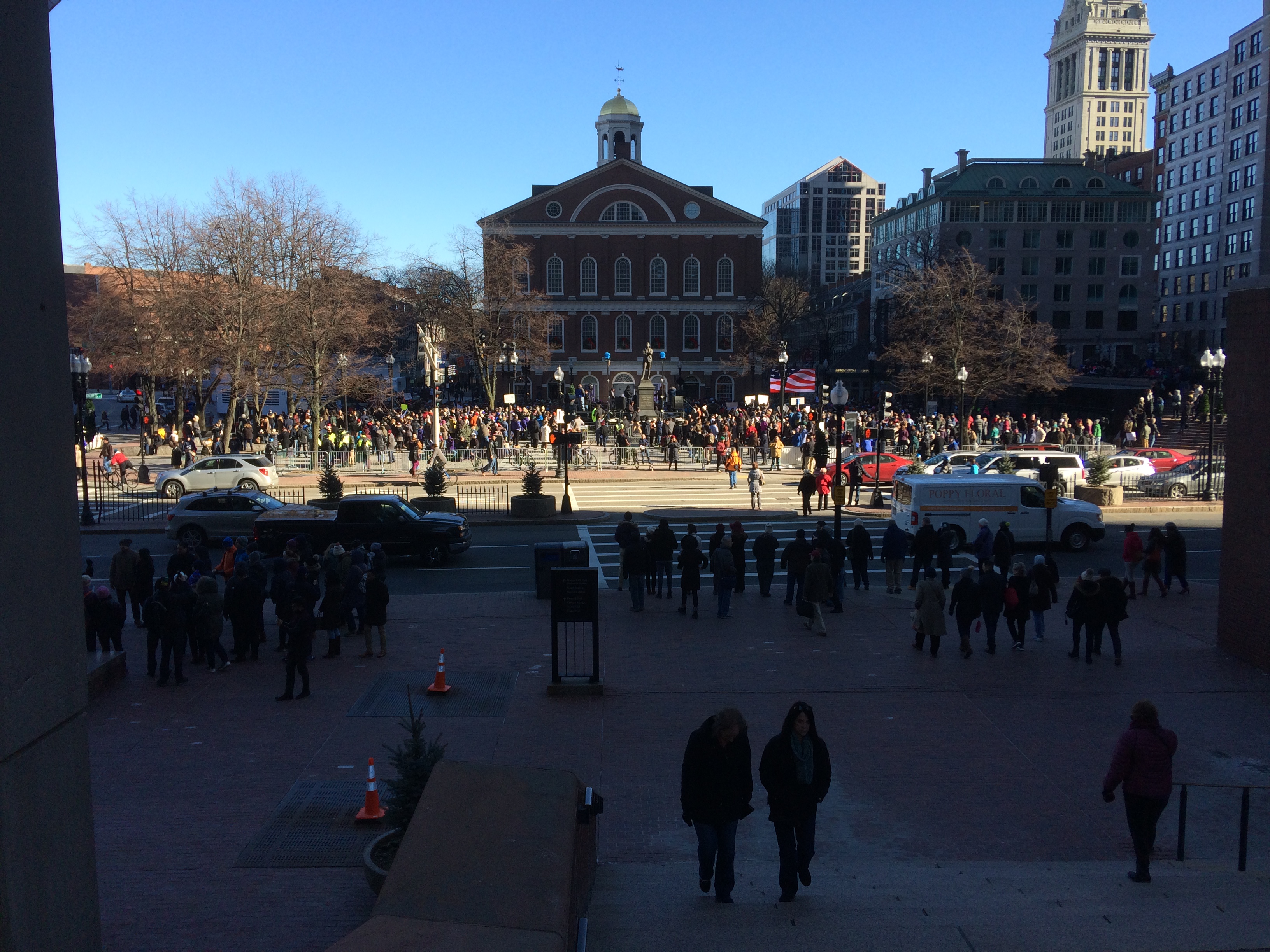 On Sunday January 15, 2017 I attended the healthcare rally in Boston at iconic Faneuil Hall. It was one of a dozen rallies around the United States. Several people spoke, including Boston Mayor Marty Walsh, U.S. Senator Elizabeth Warren, activist Sarah Grow, Carla Leviano, and U.S. Senator Edward Markey. The attendance was great and far exceeded the capacity for the auditorium inside Faneuil Hall, where it was originally planned.

The event continued outside with what I estimated at least five thousand people standing in the cold 27 degrees Fahrenheit temperature. This blog post contains several photographs I took. The photo on the right shows the crowd gather more than hour before the official 1:00 pm start of the rally.

Carla Lievano, a single-mother whose family is on MassHealth, is worried about losing her health benefits if the Affordable Care Act is repealed. She said:

"I could lose my health benefits... I’m very low income. I don’t know how I would take care of [my daughter]..." 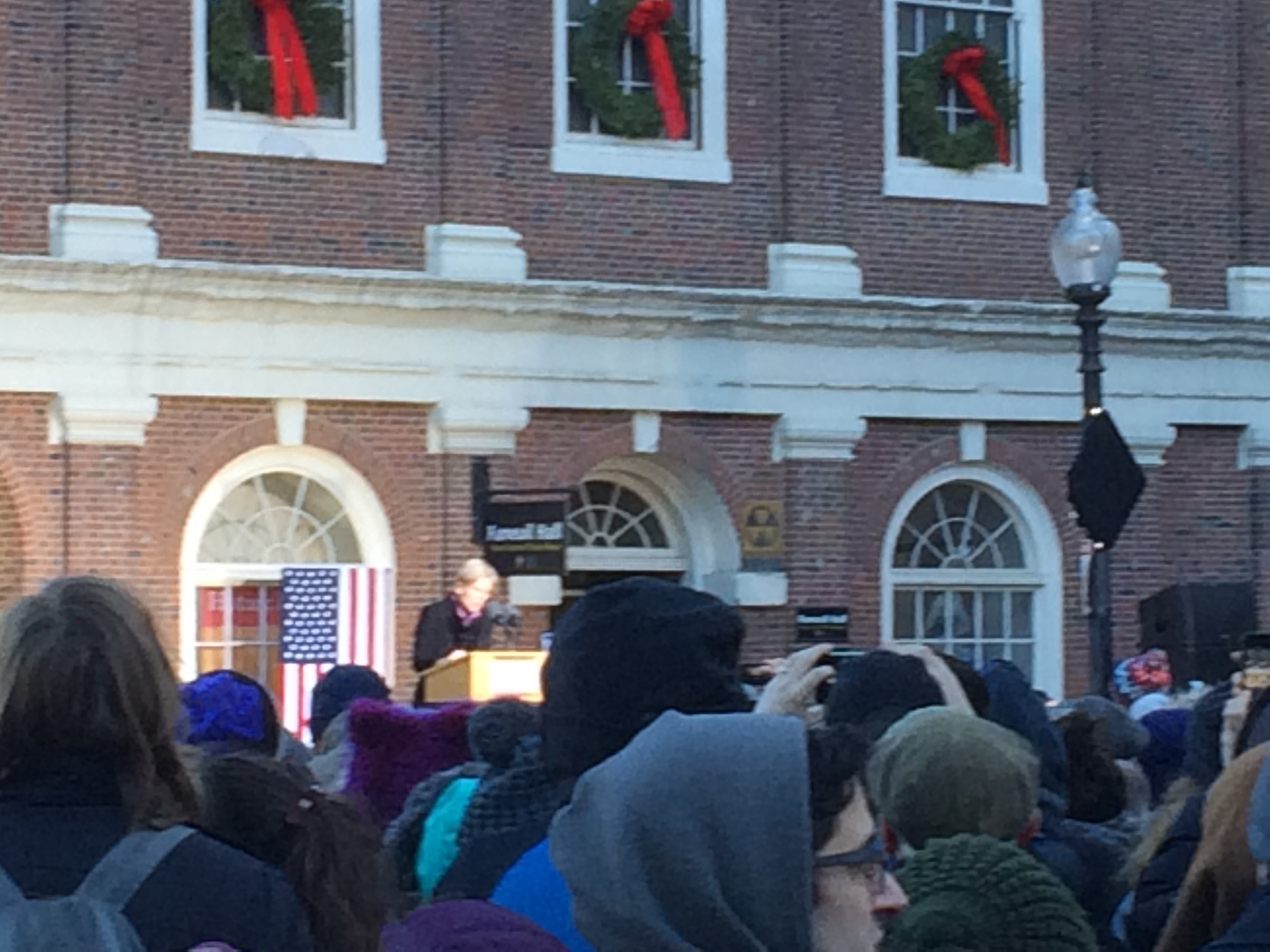 Grow shared the story of her mother's battle against cancer, and how the Affordable Care Act (ACA and a//k/a Obamacare) saved her mother's life. Her mother was able to find a replacement plan under the ACA. Below is the transcript of Senator Elizabeth Warren's remarks (courtesy of the Boston Globe):

"For eight years, Republicans in Congress have complained about health care in America, heaping most of the blame on President Obama. Meanwhile, they’ve hung out on the sidelines making doomsday predictions and cheering every stumble, but refusing to lift a finger to actually improve our health care system.

The GOP is about to control the White House, Senate, and House. So what’s the first thing on their agenda? Are they working to bring down premiums and deductibles? Are they making fixes to expand the network of doctors and the number of plans people can choose from? Nope. The number one priority for congressional Republicans is repealing the Affordable Care Act and breaking up our health care system while offering zero solutions.

Their strategy? Repeal and run.

Many Massachusetts families are watching this play out, worried about what will happen — including thousands from across the Commonwealth that I joined at Faneuil Hall on Sunday to rally in support of the ACA. Hospitals and insurers are watching too, concerned that repealing the ACA will create chaos in the health insurance market and send costs spiraling out of control.

That law was a major step forward. Today, more than 97 percent of Bay Staters are covered — the highest rate of any state in the country.

But Massachusetts still has a lot to lose if the ACA is repealed. One big reason for our state’s health care success is that we took advantage of the new opportunities offered under the ACA. In addition to making care more accessible and efficient, our state expanded Medicaid, using federal funds to help even more people. And we combined federal and state dollars to help reduce the cost of insurance on the Health Connector.

When the ACA passed, Massachusetts already had in place some of the best consumer protections in the nation. But the ACA still made a big difference. It strengthened protections for people in Massachusetts with pre-existing conditions, allowed for free preventive care visits, and — for the first time in our state — banned setting lifetime caps on benefits.

If the ACA is repealed, our health care system would hang in the balance. Half a million people in the Commonwealth would risk losing their coverage. People who now have an iron-clad guarantee that they can’t be turned away due to their pre-existing conditions or discriminated against because of their gender could lose that security. Preventive health care, community health centers, and rural hospitals could lose crucial support. In short, the Massachusetts health care law is a big achievement and a national model, but it also depends on the ACA and a strong partnership with the federal government.

If the cost-sharing subsidies provided by the ACA are slashed to zero, Massachusetts will have a tough time keeping down the cost of plans on the Health Connector. The state can’t make funds appear out of thin air to help families on the Medicaid expansion if Republicans yank away support. And our ability to address the opioid crisis will be severely hampered if people lose access to health insurance or if the federal funding provided through the Medicaid waiver disappears. Even in states with strong health care systems — states like Massachusetts — the ACA is critical.

The current system isn’t perfect — not by a long shot. There are important steps Congress could take to lower deductibles and premiums, to expand the network of doctors people can see on their plans, and to increase the stability and predictability of the market. We should be working together to make health care better all across the country, just like we’ve tried to do here in Massachusetts.

This doesn’t need to be a partisan fight. But if congressional Republicans continue to pursue repeal of the ACA with nothing more than vague assurances that they might — someday — think up a replacement plan, the millions of Americans who believe in guaranteeing people’s access to affordable health care will fight back every step of the way.

Repeal and run is for cowards." 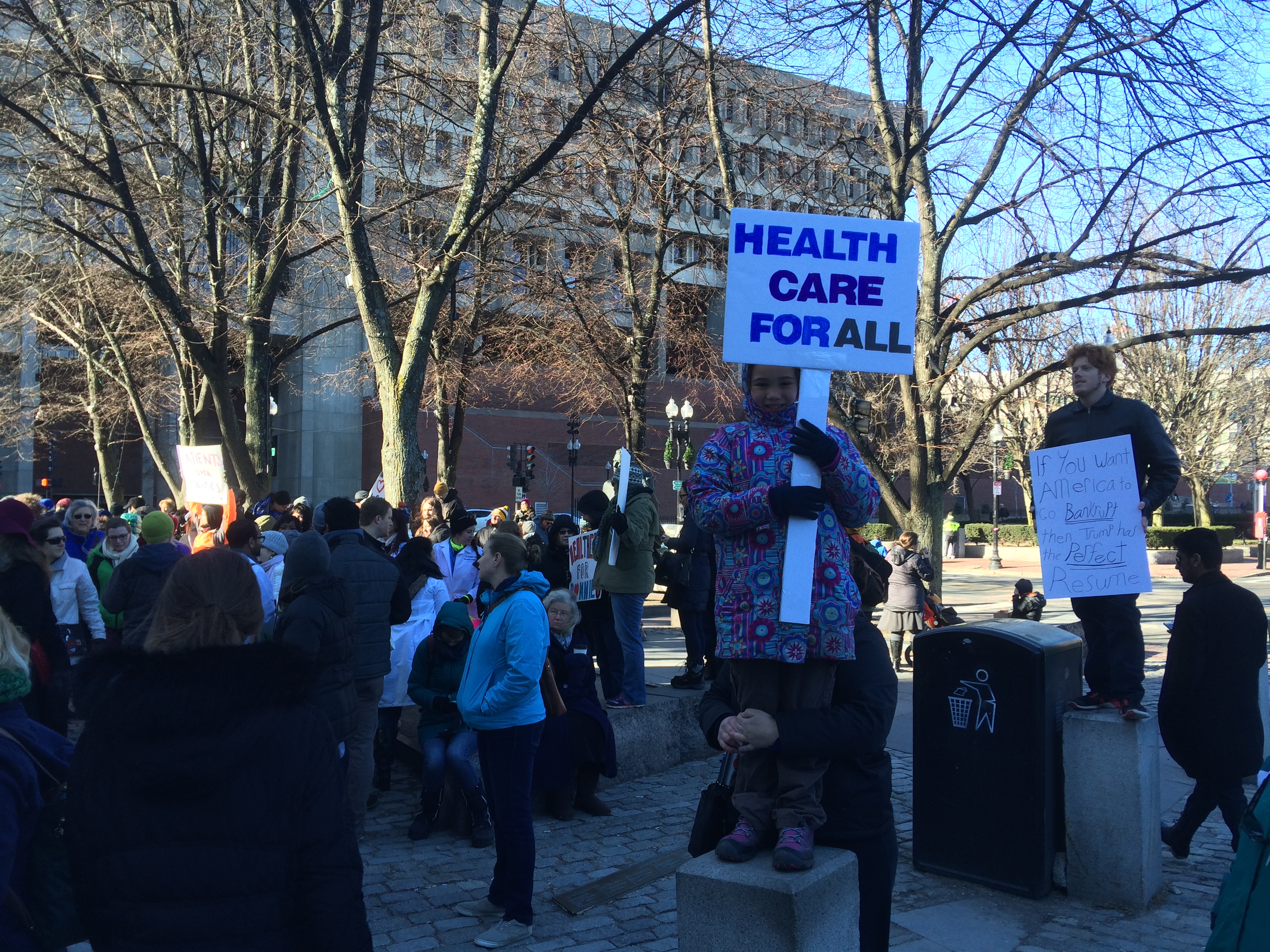 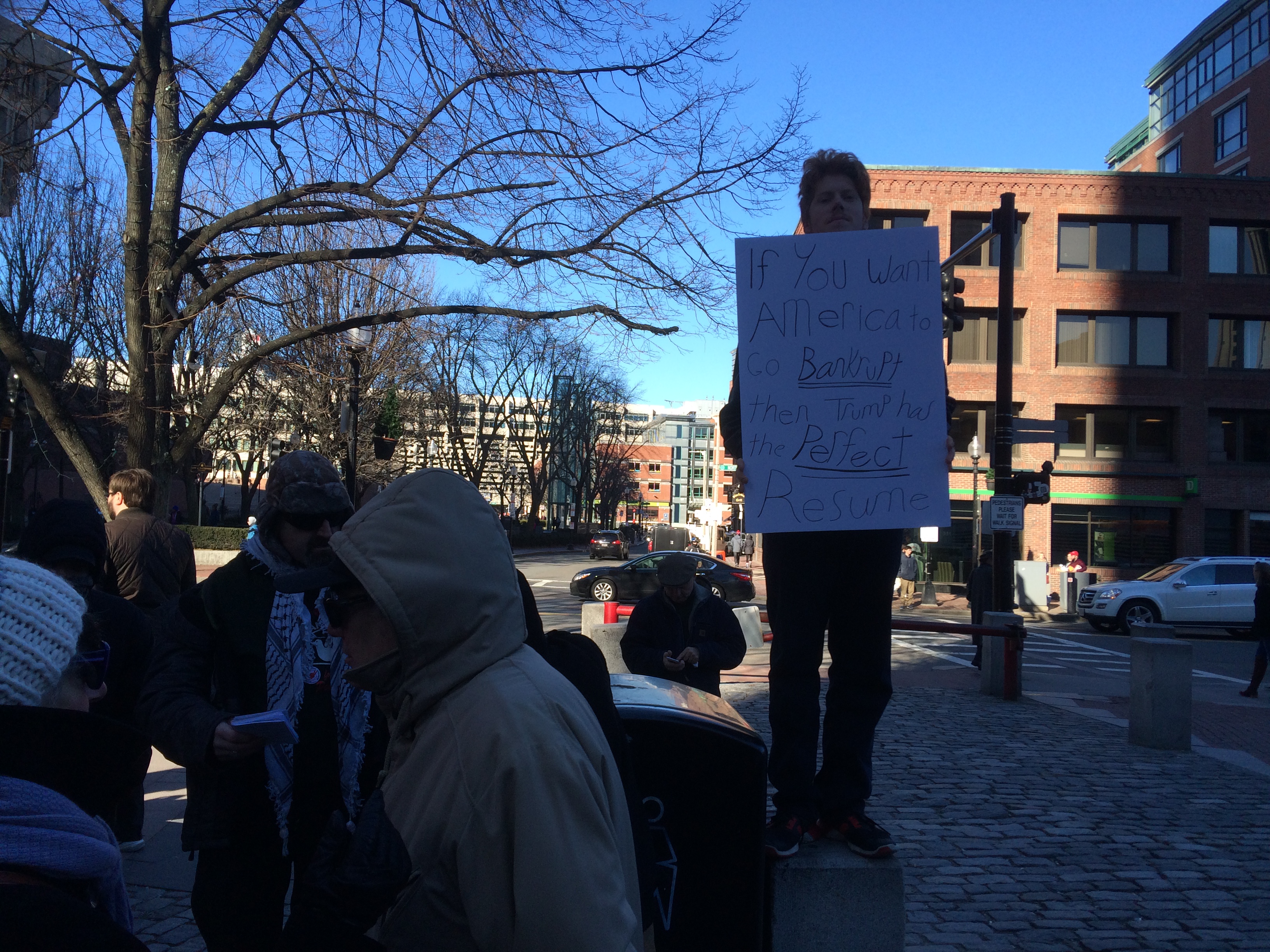 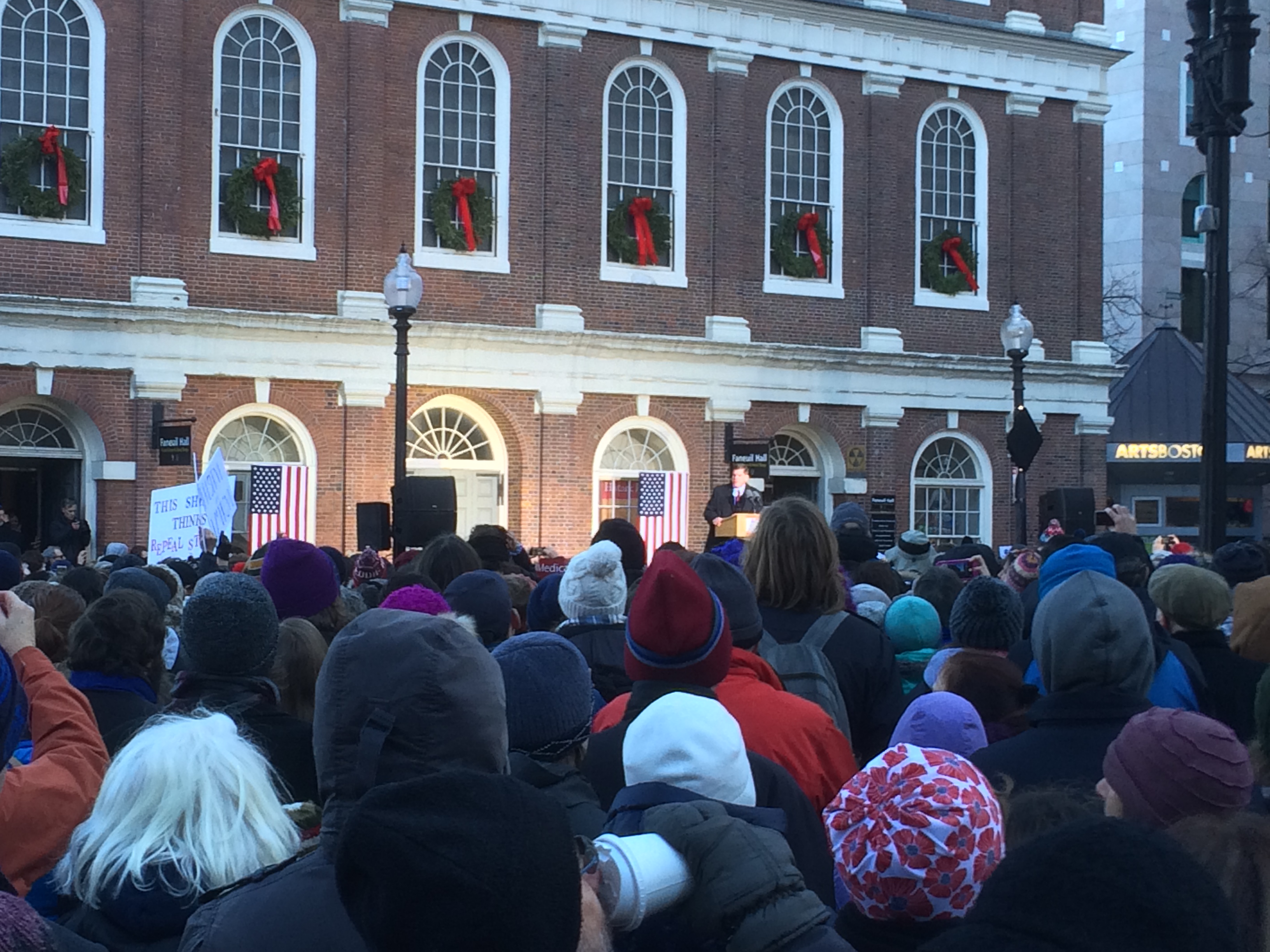 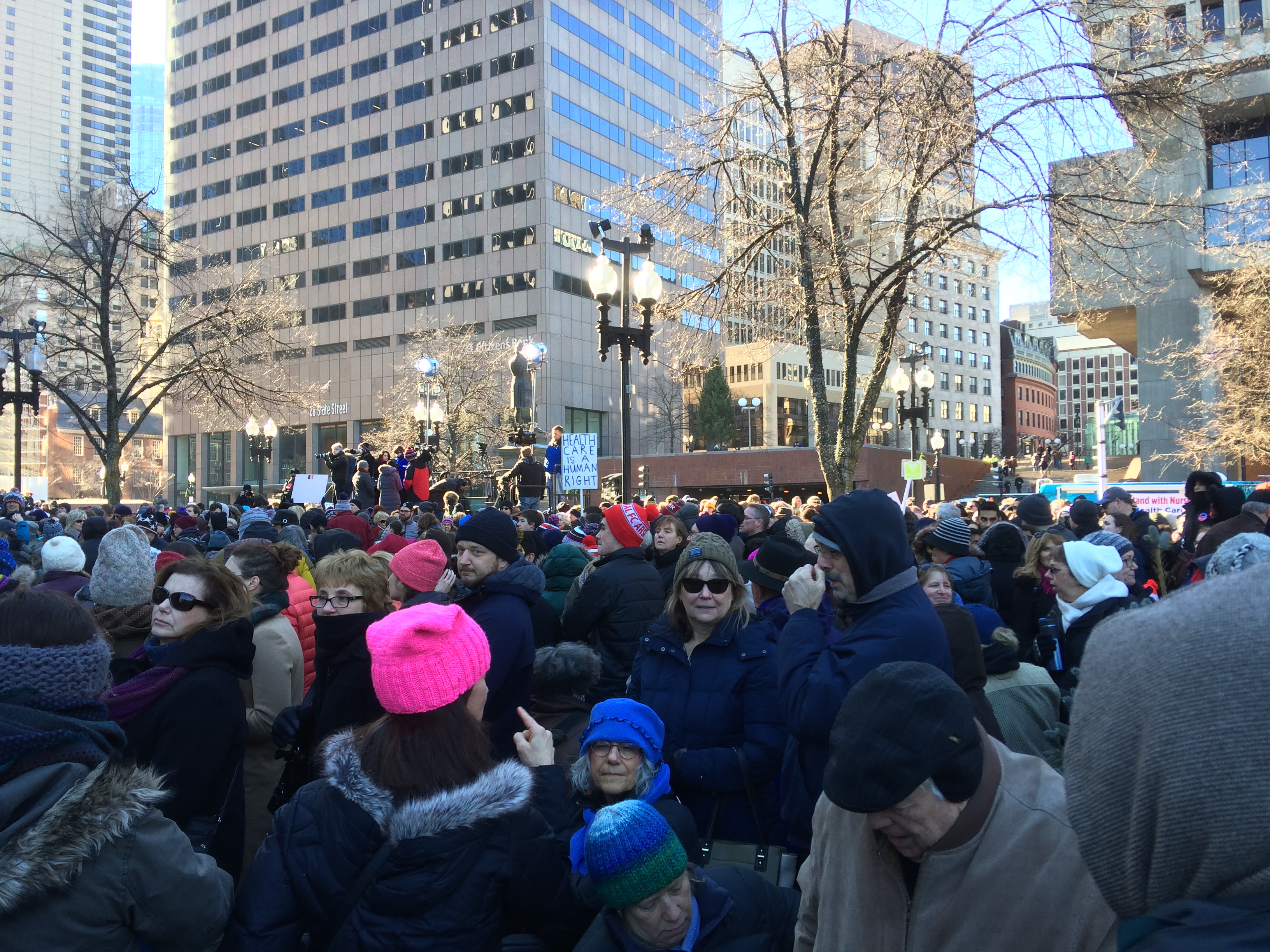 "Today's Affordable Care Act is very similar to the privatized mandate plan the Republicans pushed for 40 years. President Barack Obama — as a compromise to have basic health reform passed — used this same GOP blueprint with one significant change: adding a public option alongside the GOP’s privatized mandate plan... the public option was stripped out of the 2010 ACA bill in further compromise to attract bipartisan support for the bill, leaving in its place the very plan that the GOP wanted and pushed for decades. Unfortunately, the ACA did not receive a single vote from the Republican Party that created the plan’s primary concepts as alternative to a single-payer — “Medicare for all” — type of system. As a result, the GOP’s repeal and replace position backs it into a challenging corner. It has no real replacement plan because the ACA is essentially the privatized mandate it has pursued for so many years. The only possible alternative to a 40-year-old GOP plan would be reverting to the old system, leaving millions of people without full coverage or proper health care..."

Since the GOP has got nothing, then #repealandrun is all that's left.