Americans still love to use the plastic in their wallets and purses. Just before the holidays, the Federal Reserve Board (FRB) released the results of its study about how Americans use non-cash payment methods: debit cards, credit cards, prepaid cards, ACH payments, and checks. The study included the total number and value of non-cash payments by consumers and businesses through 2015.

There are significant differences between the volume and value for each non-cash payment type. For example, debit cards generated the largest share of payment volume and the smallest share by value: 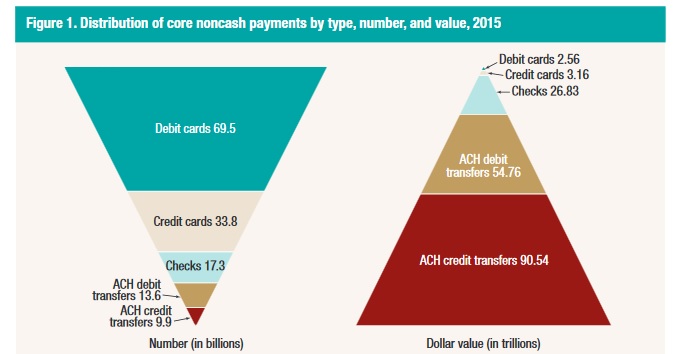 Another way of looking at the variety of non-cash payment types is the volume of payments over time: 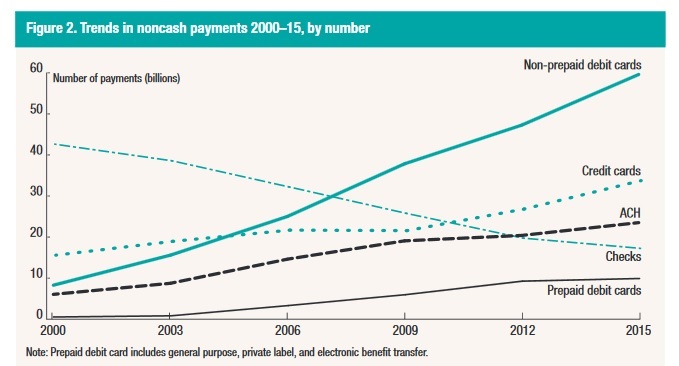 To minimize fraud and waste, banks and retailers began the migration to chip cards in the United States in 2015. The FRB study included findings about fraud:

"Payments with general-purpose cards using embedded microchips, which improve the security of in-person payments to help prevent fraud, have grown by 230 percent per year since 2012. But payments with the chip-based cards amounted to only about 2 percent share of total in-person general-purpose card payments in 2015, reflecting the early stages of a broad industry effort to roll out chip card technology. In 2015, the proportion of total general-purpose card fraud by value attributed to counterfeiting, the most prevalent type of in-person card fraud in the United States, was substantially greater than in countries where chip technology has been more widely adopted."

The United States was one of the last developed countries to switch to chip cards. So, chip card usage in the United States still has a long way to go. The types of fraud with debit/credit/prepaid cards:

Fraud is perpetrated via two channels: 1) in-person when the cardholder has their card, and 2) remote when the cardholder is not present (e.g., postal mail, online, telephone). To learn more, download the "2016 Federal Reserve Payments Study" (Adobe PDF) and/or read the FRB announcement.