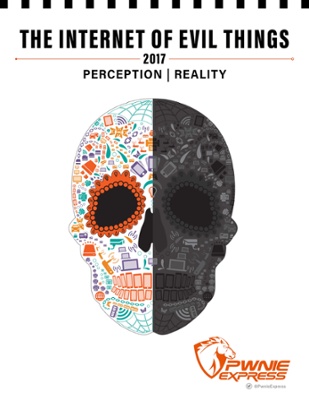 These findings have huge implications as the installed base of connected devices (a/k/a the "Internet of things" or ioT) takes off. Experts forecast 8.4 billion connected devices in use worldwide in 2017, up 31 percent from 2016. Total spending for those devices will reach almost $2 trillion in 2017, and $20.4 billion by 2020. The regions that will drive this growth include North America, Western Europe, and China; which already comprise 67 percent of the installed base.

Key results from the latest survey by Pwnie Express:

"One in five of the survey respondents (20%) said their IoT devices were hit with ransomware attacks last year. 16 percent of respondents say they experienced Man-in-the-middle attacks through IoT devices. Devices continue to lend themselves to problematic configurations. The default network from common routers “linksys” and “Netgear” were two of the top 10 most common “open default” wireless SSID’s (named networks), and the hotspot network built-in for the configuration and setup of HP printers - “hpsetup”- is #2."

An SSID, or Service Set Identifier, is the name a wireless network broadcasts. Manufacturers ship them with default names, which the bad guys often look for to find open, unprotected networks. While businesses purchase and deploy a variety of connected devices (e.g., smart meters, manufacturing field devices, process sensors for electrical generating plants, real-time location devices for healthcare) and some for "smart buildings" (e.g., LED lighting, HVAC sensors, security systems), other devices are brought into the workplace by workers.

Most companies have Bring Your Own Device (BYOD) policies allowing employees to bring and use in the workplace personal devices (e.g., phones, tablets, smart watches, fitness bands). The risk for corporate IT professionals is that when employees, contractors, and consultants bring their personal devices into the workplace, and connect to corporate networks. A mobile device infected with malware from a wireless home network, or from a public hot-spot (e.g., airport, restaurant) can easily introduce that malware into office networks.

"1. Misconfigured healthcare, security, and IoT devices will provide another route for ransomware and malware to cause harm and affect organizations.

2. Unresolved vulnerabilities or the misconfiguration of popular connected devices, spurred by the vulnerabilities being publicized by botnets, including Mirai and newer, “improved” versions, in the hands of rogue actors will compromise the security of organizations purchasing these devices.

3. Mobile phones will be the attack vector of the future, becoming an extra attack surface and another mode of rogue access points taking advantage of unencrypted Netgear, AT&T, and hpsetup wireless networks to set up man-in-the-middle attacks."