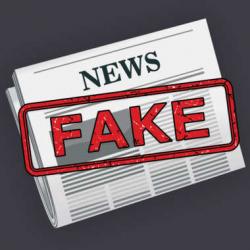 "Join us for a workshop to learn how to critically watch the news on television and online in order to detect "fake news." Using the News Literacy Project's interactive CheckologyTM curriculum, leading journalists and other experts guide participants through real-life examples from the news industry."

What is fake news? The Public Libraries Association (PLA) offered this definition:

"Fake news is just as it sounds: news that is misleading and not based on fact or, simply put, fake. Unfortunately, the literal defi­nition of fake news is the least complicated aspect of this com­plex topic. Unlike satire news... fake news has the intention of disseminat­ing false information, not for comedy, but for consumption. And without the knowledge of appropriately identifying fake news, these websites can do an effective job of tricking the untrained eye into believing it’s a credible source. Indeed, its intention is deception.

To be sure, fake news is nothing new... The Internet, particularly social media, has completely manipulated the landscape of how information is born, consumed, and shared. No longer is content creation reserved for official publishing houses or media outlets. For better or for worse, anybody can form a platform on the Inter­net and gain a following. In truth, we all have the ability to create viral news—real or fake—with a simple tweet or Facebook post."

The News Literacy Project is a nonpartisan national nonprofit organization that works with educators and journalists to teach middle school and high school students how to distinguish fact from fiction.

The upcoming workshop sessions at the BPL Grove Hall branch are tomorrow, March 11 at 3:00 pm, and Wednesday, March 29 at 1:00 pm. Participants will learn about the four main types of content (e.g., news, opinion, entertainment, and advertising), and the decision processes journalists use to decide which news to publish. The workshop presents real examples enabling workshop participants to test their skills at recognizing the four types of content and "fake news."

While much of the workshop content is targeted at students, adults can also benefit. Nobody wants to be duped by fake or misleading news. Nobody wants to mistake advertising or opinion for news. The sessions include opportunities for participants to ask questions. The workshop lasts about an hour and registration is not required.

Have you attended a "fake news" workshop at a local public library in your town or city? If so, share your experience below.