Earlier today, Ajit Pai, the Chairman of the U.S. Federal Communications Commission (FCC), gave a speech titled, "The Future Of Internet Freedom" at the Newseum in Washington, DC. He discussed the history of the Internet, regulation, business investment, innovation, and jobs. He also shared his views on regulation and a desire for the FCC's to pursue a "light touch" regulatory approach:

"First, we are proposing to return the classification of broadband service from a Title II telecommunications service to a Title I information service—that is, light-touch regulation drawn from the Clinton Administration.  As I mentioned earlier, this Title I classification was expressly upheld by the Supreme Court in 2005, and it’s more consistent with the facts and the law.

And third, we are seeking comment on how we should approach the so-called bright-line rules adopted in 2015. But you won’t just have to take my word about what is in the Notice of Proposed Rulemaking. I will be publicly releasing the entire text of the document tomorrow afternoon..."

This should not be a surprise. We've heard much of this before from Congresswoman Blackburn, the author of the recently passed House legislation to roll back consumers' online privacy protection. Blackburn said the same about FCC reclassification; that it was bad, and that the internet wasn't broken. Well it was broken prior to to 2014, and in several specific ways.

The lack of ISP competition in key markets meant consumers in the United States pay more for broadband and get slower speeds compared to other countries. Rural consumers and low-income areas lacked broadband services. There were numerous complaints by consumers about usage Based Internet Pricing. There were privacy abuses and settlement agreements by ISPs involving technologies such as deep-packet inspection and 'Supercookies' to track customers online, despite consumers' wishes not to be tracked. Many consumers didn't get the broadband speeds ISP promised. Some consumers sued their ISPs, and the New York State Attorney General invited residents to check their broadband speed with this tool. Tim Berners-Lee, the founder of the internet, cited in March three reasons why the Internet is in trouble. His number one reason: consumers had lost control of their personal information. With all of this evidence, how can Pai and Blackburn claim the internet wasn't broken?

There are more examples. Some consumers found that their ISP hijacked their online search results without notice nor consent. An ISP in Kansas admitted in 2008 to secret snooping after pressure from Congress. Given all of this, something had to be done. The FCC stepped up to the plate and acted when it was legally able to; and reclassified broadband after open hearings. Then, the FCC adopted new privacy rules in November, 2016. Proposed rules were circulated prior to adoption. It was done in the open. It made sense.

Meanwhile, the rollback of FCC broadband privacy rules is very unpopular among consumers. Comments by Pai and Blackburn seem to ignore both that and key events (listed above) in broadband history. That is practicing the "revisionist history" Pai said in his speech he disliked. That leaves me questioning whether they can be trusted to develop reasonable solutions that serve the interests of consumers.

With their victory last month to roll back the FCC's online privacy protections, pro-big-telecom advocates claim they are acting in consumers' best interests. What bull. With that rollback, consumers are no longer in control of their information. (The opt-in and other controls were killed.) Plus, we live in a capitalist society where the information that describes us is valuable property. That's why so many companies want to collect it. Consumers should be in control of their online privacy and the information that describes them, not corporate ISPs.

Corporate ISPs' next target is "net neutrality." Pai referred to it in the "bright lines" portion of his speech. For those who don't know or have forgotten, net neutrality is when consumers are in control -- consumers choose where to go online with the broadband they've purchased, and when ISPs must treat all content equally. That means no blocking, no throttling, and no paid prioritization. Net neutrality means consumers stay in control of where they go online.

Pai claimed this was unclear. Again, more bull. The FCC's no blocking, no throttling, and no paid prioritization position was crystal clear.

Without net neutrality, ISPs decide where consumers can go online, which sites you can visit, and which sites you can visit only if you pay more. ISPs would likely group web sites into tiers (e.g., slow vs. fast "lanes"), similar to premium cable-TV channels. Do you want your monthly internet bill as confusing, complicated, and expensive as your cable-TV bill? I don't, and I doubt you do either.

Pai and Blackburn claim that net neutrality (and privacy) kills innovation. I guess that depends how you define "innovation." If you define innovation as the ability of ISPs to carve up the internet to maximize they profits where consumers pay more, then it should be killed. That's not innovation. That's customer segmentation by price and paid prioritization.

In his speech, Pai provided an appealing explanation about how ISPs spent less on infrastructure. He neglected to mention that decreased infrastructure spending was a choice by ISPs. They could have cut expenses elsewhere and continued infrastructure spending, but they didn't. Instead, ISPs chose the path we see: utilize a compliant, sympathetic Republican-led Congress and White House to get what they wanted -- the ability to charge higher broadband prices -- and use slick, misleading language to appear to be consumer friendly. 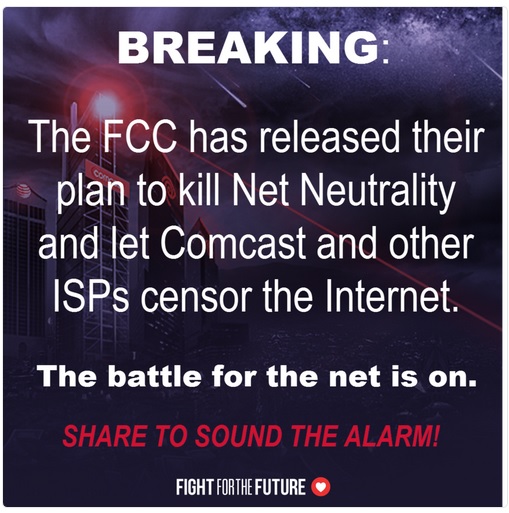 The Pai-led FCC isn't consumer friendly. The GOP-led Congress isn't, either. Regardless of how they spin it. Don't be fooled.

Anyone paying attention already knows this. Concerned citizens fought for and won net neutrality in 2014. Sadly, we might fight the net neutrality fight again.

It will be an uphill fight for two reasons. First, Republicans control the White House, House of Representatives, and Senate. Second, the Trump Administration is working simultaneously on rollbacks for several key issues (e.g., health care, immigration, wall along Mexican border, tax reform, environment, education, terrorism, etc.), making it easier to distract opponents with other issues (and with outrageous midnight tweets). Yet, people demonstrated last week at an open FCC meeting. (Video is also available here.) Now is the time for more concerned citizens to rise, speak up, and fight back. Write to your elected officials. Tell your friends, classmates, coworkers, and family members. Use this action form to contact your elected officials. Participate in local marches and protests. Join the Fight For The Future. Support the EFF.

W/out #NetNeutrality, ISPs could slow down a specific co's internet traffic bc that co can’t afford or didn’t pay for the internet fast lane

#NetNeutrality is the principle that internet content shouldn’t be favored, blocked, or slowed down based on where it’s coming from.

Pres.Trump took away your internet privacy rights. Now he plans to gut #NetNeutrality. We must protect the open internet. pic.twitter.com/RtR2bO5LVj

If @AjitPaiFCC thinks we'll let him tear #netneutrality to shreds, he's in for a surprise. I'll fight tooth & nail for free, open internet.

800+ companies from all 50 states are calling on @AjitPaiFCC to protect a free & open internet. #NetNeutrality https://t.co/d63lc3KvR7

What about your elected officials? Have they made a commitment to defend net neutrality? Ask them. Don't be silent. Now is not the time to sit on the sideline and wait for others to do the fighting for you.

The report, supra, is a great call to arms. President Trump, as noted supra, presents so many challenges to Democrats and his other opponents that he both distracts their attention and stretches their resources, as they must respond to so many issues on such a broad front. So it is certainly understandable that many would rank saving Obamacare, our environment, preventing Trump's unfair and pernicious tax proposals and budget, etc., as higher priorities, until you realize this fact: The Internet is how we know, how we organize, how we make our voices heard to those in power and to each other, and the Internet is where we make some of our most important choices. The Internet is all that and more, so that if we lose net neutrality, we lose all of that. And if we lose privacy, all of that is exposed to ISPs, with us having no say in the matter. That is why the fight for net neutrality and privacy ranks up there with the other great issues, supra, because they are how we know and have effect in a modern democracy to influence all of those other great issues.

Excellent analysis by The Consumerist explaining why regulation of the internet by the F.T.C. (which F.C.C. Chairman Pai, Congresswoman Blackburn, Senator Flake, and almost all Republicans support) is a terrible idea:

"The FTC has very limited authority to make industry-wide regulations, and can really only create rules that prohibit unfair or deceptive business practices. So it can not, for example, tell ISPs to stop collecting and selling sensitive user data, so long as these companies are disclosing the practice in their fine print. That means we must rely on ISPs promising to play nice.

In most of the country, thanks to the history of cable, broadband providers are a local monopoly. Several reports over the years have shown ghat for the majority of is, competition is nonexistent. That leads to an environment where prices get higher and customer service gets worse, because there’s basically nothing you can do about it; you’re a captive audience. Customers are overwhelmingly dissatisfied with their internet providers, consistently ranking them worst among any industry.

With that as the backdrop, it’s very easy to be skeptical that any voluntary promise is even worth the pixels it’s printed with — because companies break their promises all the time.

Stripping ISPs of their common carrier classification would make it the FTC’s job, not the FCC’s, to make sure that the ISPs do what they’re going to say — but there’s a big catch there.

The FTC can only step in if companies are doing something anticompetitive or if they say one thing but then do another, basically. If, absent net neutrality, Comcast or AT&T were to change their terms of service to say something like, “All use of Netflix instead of our proprietary video service will incur you a $1/month additional ‘network usage’ fee, otherwise we throttle it to 768 Kbps” then they’d be in the clear to charge you that fee or throttle your connection. It would only be if they didn’t first disclose their intention that the FTC would bust them.

Companies can, and do, change their terms of service and customer agreements all the time. If you’re lucky, you get notice and the policy is comprehensible. If not, it happens on the sly. Without a law, there is absolutely nothing to prevent companies from changing their terms and creating fast lanes and additional access fees down the line when people aren’t paying attention."