Now that the Republican-led Congress and President Trump have dismantled broadband privacy rules, internet service providers (ISPs) are free to collect, archive, and share at will without disclosure consumers' complete online activities (e.g., far more than browsing histories) to maximize their profits. Just about all of your online activities are harvested by ISPs, not just your browsing histories. Readers of this blog may remember the Deep-Packet Inspection software some ISPs installed on their servers to track their customers' online usage without notice nor consent.

To combat this, many consumers seek technical solutions, such as a virtual private network (VPN), to maintain as much privacy online as possible. Consumers will need to locate VPN and other tools than run on several devices (e.g., phones, tablets, laptops, desktops, etc.) and browsers (e.g., Firefox, Opera, etc.). Resources about several tools including VPNs:

Reviews and comparisons about VPN providers:

All of the above resources contain links to specific VPN brands. Experts recommend that consumers shop around for a paid VPN, since many of the free VPNs collect and resell consumers' information to make money. Some VPN providers offer phone customer service and support. This may be especially helpful for inexperienced users.

If a (free or paid) VPN saves usage logs of its customers' online activity and shares those logs with others (e.g., advertisers, affiliates, marketing partners, law enforcement, etc.), then that totally defeats the purpose of using a VPN service for privacy. So wise consumers shop around, read the terms of service, and read the privacy policy before signing up for a VPN.

Just like anti-virus software, several VPNs running on the same device can cause problems. So, you'll need to spend time sorting that out, too.

Sadly, VPNs are not a cure-all. Your ISP can still block or throttle your connection. Basically, there is no substitute for consumers being in control of their online privacy with transparent notice by ISPs. And, VPNs won't protect internet-of-things devices (e.g., appliances, refrigerators, thermostats, security systems, televisions, etc.) connected in to the WiFi router in your home. Tech Dirt reported:

"VPN clients are typically for desktop machines and, in some cases, mobile devices such as phones and tablets. As previously discussed, IoT devices in homes will continue to generate more traffic. Most such devices do not support VPN software. While it is conceivable that a user could set up an encrypted VPN tunnel from the home router and route all home traffic through a VPN, typical home gateways don’t easily support this functionality at this point, and configuring such a setup would be cumbersome for the typical user."

Do you use Gmail? Remember Google scans both inbound and outbound e-mail messages supposedly to serve up relevant ads. While a certain amount of message scanning is appropriate to identify spam and malware, last month a federal court judge rejected a proposed settlement offer with non-Gmail users who had filed a class-action lawsuit because their e-mail messages had been scanned by Google (and they couldn't opt out of the scanning).

So, internet costs for consumers are going up with thanks to privacy-busting legislation passed by a Republican-led Congress. Consumers will pay more, perhaps an additional $50 - $80 yearly for VPN services, on top of already high monthly internet prices -- with a marginal increase in privacy; not the better, more complete solution consumers would have received with the FCC broadband privacy rules. Add in the value of your time spent shopping around for VPN and privacy tools, and the price increase is even greater.

Plus, monthly internet costs for consumers could go far higher if ISPs charge for online privacy. Is that possible you ask? Yep. Comcast and industry lobbyists have already stated that they want "pay-for-privacy" schemes. Congress seems happy to oblige corporate ISPs and stick it to consumers. 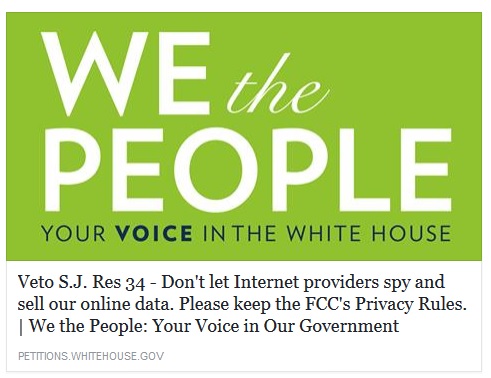 Mad about all of this? You probably are, too. I am. Be sure to tell your Senators and House representatives that voted to revoke FCC online privacy rules. Tell them you dislike the higher prices you're forced to pay to maintain privacy online.

Do any VPN providers act as fronts for government intelligence and spy agencies? I do not have the resources to determine this. Perhaps, some enterprising white-hat users can shed some light on this.