A recent poll found that the Republican rollback of broadband privacy rules is very unpopular. Very unpopular. The poll included 1,000 Americans, and the results cut across age, gender, and political affiliations. Despite this, President Trump signed the privacy-rollback legislation on April 3. Since then, many consumers have sought online tools to protect their privacy. 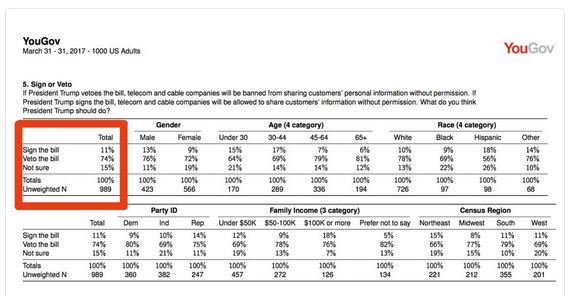 Late last week, several Republicans in the House of Representatives sent a letter (Adobe PDF) to Ajit Pai, the Chairman of the U.S. Federal Communications Commission (FCC), urging the FCC to regulate broadband service providers. The letter read, in part:

"We write to ensure that the Federal Communications Commission (FCC) stands ready to protect consumer privacy... The Federal Trade Commission (FTC) has long been the standard bearer for striking the right balance of consumer protection with a pro-innovative construct that encourages consumer choice, opportunities, and new jobs... An FCC approach that mirrors the FTC will continue to protect consumers in this tumultuous time... Until such time as the FCC rectifies the Title II reclassification that inappropriately removed ISPs from the FTC's jurisdiction, we urge the FCC to hold Internet service providers (ISPs) to their privacy promises..."

The letter was signed by Greg Walden (Chairman, Committee on Energy & Commerce), Marsha Blackburn (Chairman, Subcommittee on Communications & Technology), and 48 other representatives.

Tumultuous times? The tumult was created by the rollback of privacy rules -- a situation created by Republicans. All would have been fine if they'd left the FCC's broadband privacy rules in place; rules consumers clear want -- rules that keep users in control of their online privacy.

Representative Blackburn and her fellow Republicans either doesn't know history or have chosen to ignore it. Several problems have plagued the industry: a lack of ISP competition in key markets, consumers in the United States pay more for broadband and get slower speeds compared to other countries, and numerous privacy violations and lawsuits:

Clearly, the FCC had to act, it did, it held hearings, and then finalized improved broadband privacy rules to help consumers. Now, the Congress and President undid all of that creating the tumult they now claim to want to solve.

Clearly, Representative Blackburn and others are happy to comply with the wishes of their corporate donors -- who don't want broadband classified as a utility. Internet access is a basic consumer need for work, entertainment, and school -- just like water, electricity, and natural gas (for cooking). Internet access is a utility, like it or not. The FCC under Chairman Wheeler had the right consumer-friendly approach, despite the spin by Blackburn and others.