Home Archives Resources Profiile Feeds/RSS
Speech By FCC Chairman. Time For Citizens To Fight To Keep Net Neutrality Protections
The Need For A Code Of Ethics With The Internet Of Things

After encountering unresolved issues with financial services, many consumers file complaints with the Consumer Financial Protection Bureau (CFPB). After each complain, the CFP works hard to get each consumer a reply within 15 days. This process allows the CFPB to track which issues affect most consumers, and to identify emerging problems.

According to its April Monthly Complaint Report, debt collection issues generated the most complaints on average, and complaints about student loans grew the fastest: 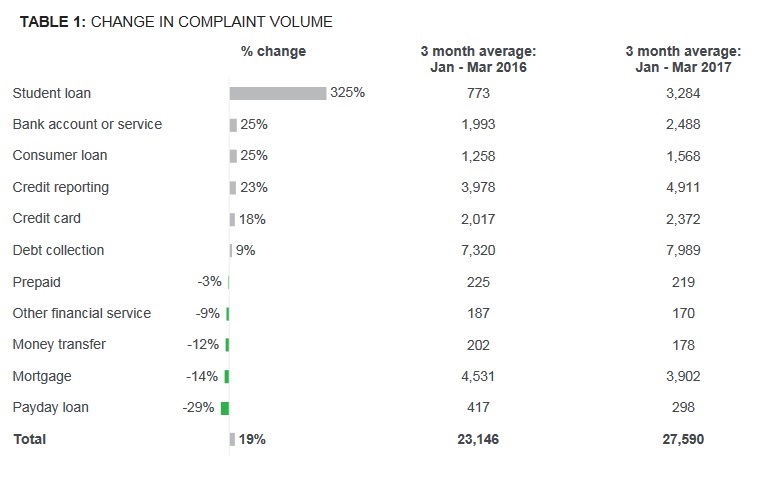 The top five categories of complaints about during March, 2017:

The top five categories of complaints since the CFPB began:

The CFPB began accepting complaints for different products and services at different times:

There were regional differences in complaint volume: 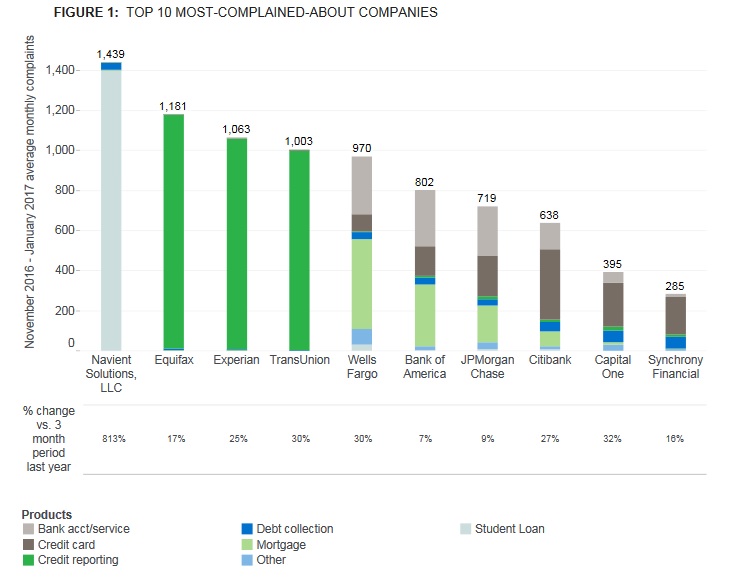 "Approximately 32,700 (or 74 percent) of all student loan complaints handled by the CFPB from July 21, 2011 through March 31, 2017 were sent by the CFPB to companies for review and response. The remaining complaints have been found to be incomplete (7 percent), referred to other regulatory agencies (19 percent), or are pending with the CFPB or the consumer (0.5 percent and 0.4 percent, respectively)... The most common issues identified by consumers are problems dealing with their lenders or servicers (64 percent) and being unable to repay their loans (33 percent)."

Federal student loan borrowers described their experiences when trying to obtain guidance in completing annual income recertification for their income-driven repayment plan. Borrowers reported receiving insufficient information from their servicers to meet recertification deadlines and lengthy processing times. Some federal student loan borrowers stated their payments were misapplied. Borrowers reported overpayments were not applied to specified accounts but rather applied to all accounts managed by the servicer. Additionally, some borrowers’ overpayments—intended to reduce principal balance—were credited to the account as an early payment, resulting in their ac count reflecting a paid ahead status..."