"The Federal Communications Commission today took the first step toward restoring Internet freedom and promoting infrastructure investment, innovation, and choice by proposing to end utility-style regulation of broadband Internet access service. In a Notice of Proposed Rulemaking, the FCC proposes to return to the bipartisan framework that preserved a flourishing free and open Internet for almost 20 years.  First, the Notice proposes to reverse the FCC’s 2015 decision to impose heavy-handed Title II utility-style government regulation on Internet service providers (ISPs) and return to the longstanding, successful light-touch framework under Title I of the Communications Act.

Second, the Notice proposes to return to the Commission’s original classification of mobile broadband Internet access service as a private mobile service.  Given the historical innovation and success of the wireless marketplace prior to the Title II Order, this proposal is expected to substantially benefit consumers and the marketplace.

The vote happened on the scheduled date, despite the unavailability for several hours Sunday morning, May 7, of the FCC website for public comments. The FCC said its site crashed due to a DDoS attack. Before the vote, more than 2 million persons and organizations submitted feedback to the FCC.

In a statement about the vote, FCC Chairman Ajit Pai repeated prior claims about "heavy-handed" regulation, an internet that wasn't broken, and decreased infrastructure investment by internet service providers (ISPs). All of these claims were discussed and debunked previously after Chairman Pai's speech in April.

"Eliminating the Open Internet Order takes away the internet's level playing field and would allow a select few corporations to choose winners and losers, preventing consumers from accessing the content that they want, when they want it," said Jonathan Schwantes, senior policy counsel for Consumers Union. Democratic Senator Al Franken of Minnesota called it "a major step toward destroying the internet as we know it."

"More than 1,000 startups and investors have now signed an open letter to Pai opposing the proposal. The Internet Association, a trade group representing bigger companies like Facebook, Google, and Amazon, has also condemned the plan. "The current FCC rules are working for consumers and the protections need to be kept in tact," Michael Beckerman, president and CEO of the Internet Association, said at a press conference Wednesday."

"Congress could eventually have a say on the issue. At about the same time the FCC was considering the issue, Sen. John Thune, R-S.D., called for Congress to pass legislation "to protect the internet." Thune, who is the chairman of the Senate Commerce Committee, urged colleagues "to begin bipartisan work on such legislation without any further delay. Innovation and job creation should no longer take a backseat to partisan point-scoring," he said..."

After re-reading the FCC announcement several times, I noticed that it failed to mention nor summarize the feedback received from the public. This makes one wonder if Chairman Pai and the committee took the time to review the comments submitted. During the last thirty (3) days, the public submitted 2,174,196 filings and comments. (See image below.) The feedback included a mix of comments for and against the latest changes.

Did Chairman Pai and the committee read this feedback, or were their minds already made up? And if so, did they simply ignore more than 2 million comments? Fortunately, the public can continue to submit feedback about Proceeding 17-108 until August for the subsequent final FCC vote. 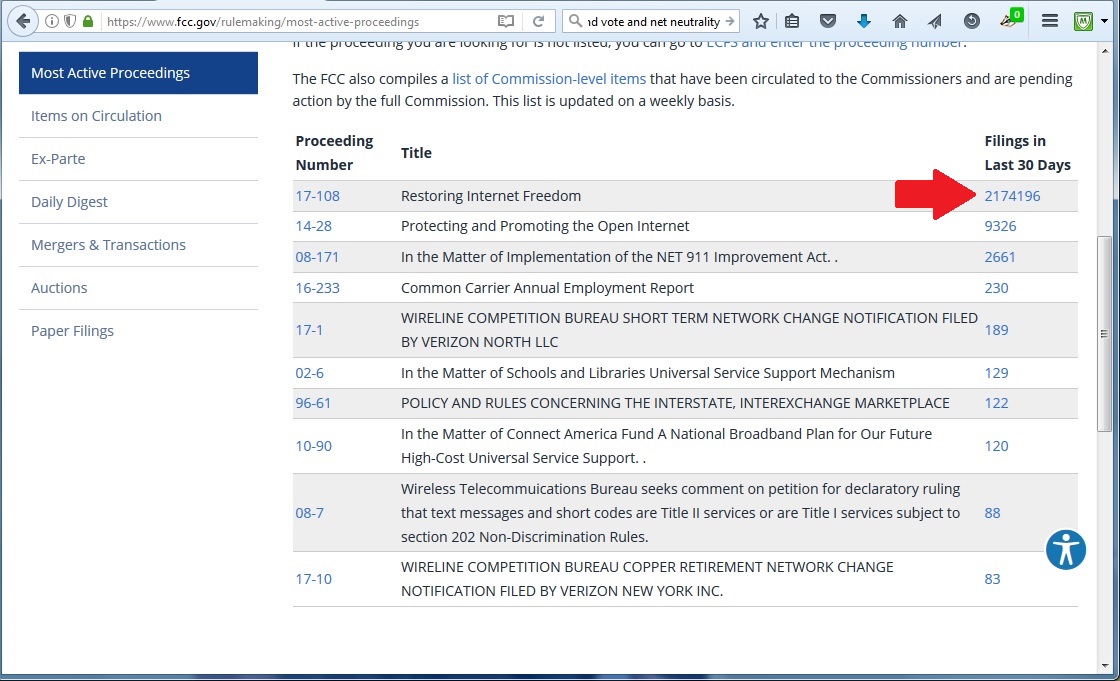