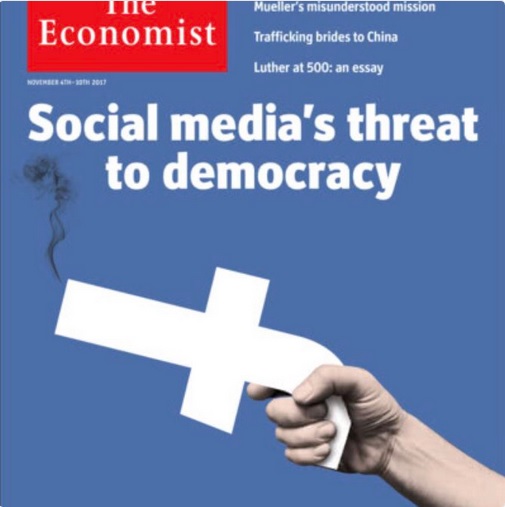 The November 4th issue of The Economist magazine discussed whether social networking sites threaten democracy in the United States and elsewhere. Social media were supposed to better connect us with accurate and reliable information. What we know so far (links added):

"... Facebook acknowledged that before and after last year’s American election, between January 2015 and August this year, 146m users may have seen Russian misinformation on its platform. Google’s YouTube admitted to 1,108 Russian-linked videos and Twitter to 36,746 accounts. Far from bringing enlightenment, social media have been spreading poison. Russia’s trouble-making is only the start. From South Africa to Spain, politics is getting uglier... by spreading untruth and outrage, corroding voters’ judgment and aggravating partisanship, social media erode the conditions..."

You can browse some of the ads Russia bought on Facebook during 2016. (Hopefully, you weren't tricked by any of them.) We also know from this United Press International (UPI) report about social media companies' testimony before Congress:

"Senator Patrick Leahy (D-Vt) said Facebook still has many pages that appear to have been created by the Internet Research Agency, a pro-Kremlin group that bought advertising during the campaign. Senator Al Franken (D-Minn.) said some Russian-backed advertisers even paid for the ads in Russian currency.

"How could you not connect those two dots?" he asked Facebook general council Colin Stretch. "It's a signal we should have been alert to and, in hindsight, one we missed," Stretch answered."

And during the Congressional testimony:

"Google attorney Richard Salgado said his company's platform is not a newspaper, which has legal responsibilities different from technology platforms. "We are not a newspaper. We are a platform that shares information," he said. "This is a platform from which news can be read from many sources."

Separate from the Congressional testimony, Kent Walker, a Senior Vice President and General Counsel at Google, released a statement which read in part:

"... like other internet platforms, we have found some evidence of efforts to misuse our platforms during the 2016 U.S. election by actors linked to the Internet Research Agency in Russia... We have been conducting a thorough investigation related to the U.S. election across our products drawing on the work of our information security team, research into misinformation campaigns from our teams, and leads provided by other companies. Today, we are sharing results from that investigation... We will be launching several new initiatives to provide more transparency and enhance security, which we also detail in these information sheets: what we found, steps against phishing and hacking, and our work going forward..."

This matters greatly. Why? by The Economist explained that the disinformation distributed via social media and other websites:

"... aggravates the politics of contempt that took hold, in the United States at least, in the 1990s. Because different sides see different facts, they share no empirical basis for reaching a compromise. Because each side hears time and again that the other lot are good for nothing but lying, bad faith and slander, the system has even less room for empathy. Because people are sucked into a maelstrom of pettiness, scandal and outrage, they lose sight of what matters for the society they share. This tends to discredit the compromises and subtleties of liberal democracy, and to boost the politicians who feed off conspiracy and nativism..."

When citizens (via their elected representatives) can't agree nor compromise, then government gridlock results. Nothing gets done. Frustration builds among voters.

"When Facebook farms out items to independent outfits for fact-checking, the evidence that it moderates behavior is mixed. Moreover, politics is not like other kinds of speech; it is dangerous to ask a handful of big firms to deem what is healthy for society.

"Breaking up social-media giants might make sense in antitrust terms, but it would not help with political speech—indeed, by multiplying the number of platforms, it could make the industry harder to manage."

All of the solutions have advantages and disadvantages. It seems the problems will be with us for a long while. Social media has been abused... and will continue to be abused. Comments? What solutions do you think would be best?