You've probably heard that Ajit Pai, the Chairman of the U.S. Federal Communications Commission (FCC), is leading his agency towards a vote on December 14, 2017 to kill net neutrality. How will consumers' online lives change? Futurism described what your online life will be like without net neutrality:

"You’re at work and want to check Facebook on your lunch break to see how your sister is doing. This is not exactly a straightforward task, as your company uses Verizon. You’re not about to ask your boss if they’d consider putting up the extra cash every month so that you can access social media in the office, so you’ll have to wait until you get home.

That evening, you log in to pay your monthly internet bill — or rather, bills.

See, there’s the baseline internet cost, but without net neutrality, you also have to pay a separate monthly fee for social media, another for "leisure" pages like Reddit and Imgur, and another still for liberal-leaning news sites — because your provider’s CEO is politically conservative. Not only is your bill confusing, you’re not sure you can really afford to access all these websites that, at one point in time, you took for granted.

In addition to the sites you can access if you pay for them, there are also websites that have just become lost to you. Websites that you once frequented, but that now, you aren’t even sure how to access anymore. You can’t even pay to access them. You used to like reading strange Wikipedia articles late at night and cruising for odd documentaries — but now, all those interests that once entertained and educated you in your precious and minimal free time are either behind yet another separately provided paywall or blocked entirely. You’ve started to ask around, see if your friends or coworkers with other providers have better access... but the story is pretty much always the same." 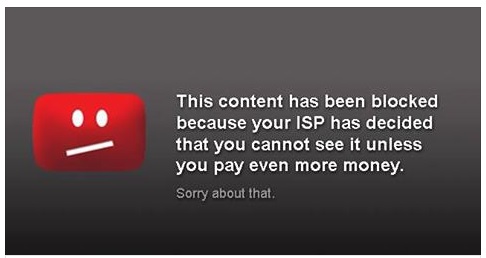 In short, without net neutrality:

If you think this can't happen in the United States, consider:

"Some countries are already living this reality. In New Zealand, Vodafone offers mobile internet packages that are comprised of different types of services. You might have to pay a certain amount to access social apps like Snapchat and Instagram, and a separate fee to chat with friends via Facebook Messenger and iMessage. A similar framework is used by Portugal’s MEO, where messaging, social media, music streaming, video streaming, and email are also split into separate packages.

"Federal Communications Commission (FCC) Chairman Ajit Pai told Breitbart News in an exclusive interview that an open and free internet is vital for America in the 21st century. During a speech at the Newseum on Wednesday, Pai said he plans to roll back the net-neutrality regulations and to restore the light-touch regulatory system established by President Bill Clinton and Congressional Republicans by the 1996 Telecommunications Act... Chairman Pai said during his speech that the internet prospered before net neutrality was enacted... Breitbart News asked the FCC chief why he thinks that net neutrality is a problem, and why we must eliminate the rule. He said: "Number one there was no problem to solve, the internet wasn’t broken in 2015. In that situation, it doesn’t seem me that preemptive market-wide regulation is necessary. Number two, even if there was a problem, this wasn’t the right solution to adopt. These Title II regulations were inspired during the Great Depression to regulate Ma Bell which was a telephone monopoly. And the broadband market we have is very different from the telephone market of 1934. So, it seems to me that if you have 4,462 internet service providers and if a few of them are behaving in a way that is anti-competitive or otherwise bad for consumer welfare then you take targeted action to deal with that. You don’t declare the entire market anti-competitive and treat everyone as if they are a monopolist. Going forward we are going to propose eliminating that Title II classification and figure out the right way forward. The bottom line is, everyone agrees on the principles of a free and open internet what we disagree with is how many regulations are needed to preserve the internet." "

Note the language. Pai uses "free and open internet" to refer to freedoms for ISPs to do what they want; a slick attempt to co-opt language net neutrality proponentsused for freedoms for consumers go online where they want without additional fees. Pai's "Light touch" means fewer regulations for ISPS regardless of the negative consequences upon consumers. Pai's comments in April attempted to spin existing net neutrality laws as antiquated ("the telephone market of 1934"), when, in fact, net neutrality was established recently... in 2010. Even the same Breitbart News article admitted this:

Pai's exaggerations and falsehoods are astounding. Plenty of bogus claims by Pai and net neutrality critics. In January of this year, President Donald Trump appointed Ajit Pai, a former lawyer with Verizon, as the FCC Chairman. Earlier this year, CNN reported:

"More than 1,000 startups and investors have now signed an open letter to Pai opposing the proposal. The Internet Association, a trade group representing bigger companies like Facebook, Google, and Amazon, has also condemned the plan. "The current FCC rules are working for consumers and the protections need to be kept in tact," Michael Beckerman, president and CEO of the Internet Association, said at a press conference Wednesday."

Regular readers of this blog are aware that more than "a few" ISPs committed abused consumers and content producers. (A prior blog post listed many historical problems and abuses of consumers by some ISPs.) Also, consider this: Pai made his net-neutrality position clear long before the public submitted comments to the FCC this past summer. Sounds like he never really intended to listen to comments from the public. Not very open minded.

As bad it all of this sounds, it's even worse. How? An FCC Commissioner, 28 U.S. senators, and the New York State Attorney General (AG) have lobbied FCC Chairman Pai to delay the net neutrality vote planned by the FCC on December 14, due to clear and convincing evidence of the massive fraud of comments submitted to the FCC's online commenting system.

In short, the FCC's online comments system is corrupted, hacked, and unreliable. The group (e.g., FCC commissioner, 28 Senators, and NY State AG) also objects to the elimination of net neutrality on the merits.

The fraud evidence is pretty damning, but Chairman Pai seems intent upon going ahead with a vote to kill net neutrality despite the comments fraud. Why? How? Ars Technica reported on December 4th:

"FCC Chairman Ajit Pai says that net neutrality rules aren't needed because the Federal Trade Commission can protect consumers from broadband providers... When contacted by Ars, Pai's office issued this statement in response to the [delay request] letter: "This is just evidence that supporters of heavy-handed Internet regulations are becoming more desperate by the day as their effort to defeat Chairman Pai's plan to restore Internet freedom has stalled. The vote will proceed as scheduled on December 14."

I find the whole process deeply disturbing. First, only 28 U.S. Senators seem concerned about the massive comments fraud. Why aren't all 100 concerned? Second, why aren't any House members concerned? Third, President Trump hasn't said anything about it. (This makes one wonder if POTUS45 either doesn't care consumers are hurt, or is asleep at the wheel.) Elected officials in positions of responsibility seem willing to ignore valid concerns.

Many consumers are concerned, and protests to keep net neutrality are scheduled for later today outside Verizon stores nationwide. What do you think?