Report: Air Travel Globally During 2017 Was The Safest Year On Record

"The Dutch-based aviation consultancy, To70, has released its Civil Aviation Safety Review for 2017. It reports only two fatal accidents, both involving small turbo-prop aircraft, with a total of 13 lives lost. No jets crashed in passenger service anywhere in the world... The chances of a plane being involved in a fatal accident is now one in 16 million, according to the lead researcher, Adrian Young... The report warns that electronic devices in checked-in bags pose a growing potential danger: “The increasing use of lithium-ion batteries in electronics creates a fire risk on board aeroplanes as such batteries are difficult to extinguish if they catch fire... The UK has the best air-safety record of any major country. No fatal accidents involving a British airline have happened since the 1980s. The last was on 10 January 1989... In contrast, sub-Saharan Africa has an accident rate 44 per cent worse than the global average, according to the International Air Transport Association (IATA)..."

Read the full 2017 aviation safety report by To70. Below is a chart from the report. 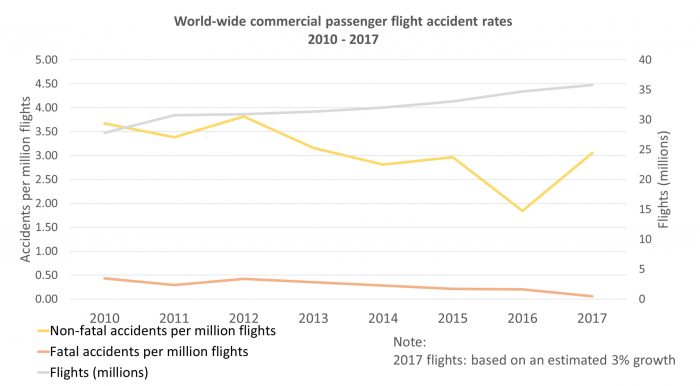