The United States Has A Problem: Declining Foreign Visitors 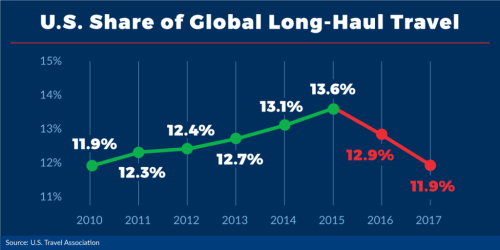 The United States has a problem: the number of international visitors is declining. What are companies doing to counter this, lost revenues, and other negative impacts? Bloomberg reported (bold emphasis added):

"... 10 business associations, including the U.S. Chamber of Commerce and the National Restaurant Association, have created a travel industry group aimed at reversing the growing unpopularity of the U.S. as a vacation destination. So [last week], some of its biggest players unveiled the "Visit U.S. Coalition" to spur the Trump administration into enacting friendlier visa and border-security policies at a time when federal agencies are doing the opposite... Since 2015, the U.S. and Turkey have been the only places among the top dozen global travel destinations to experience a decline in inbound visitors, a time when other nations such as Australia, Canada, China and the United Kingdom have marked sizable gains..." 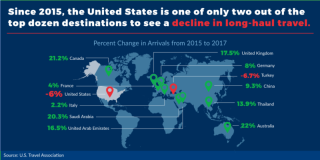 Foreign visitors spend their travel money here, which helps businesses in the USA. The amount of the travel decline is measurable:

"... the Commerce Department reported a 3.3 percent drop in traveler spending for last year, through November, the equivalent of $4.6 billion in losses and 40,000 jobs. The U.S. share of international long-haul travel fell to 11.9 percent last year, from 13.6 percent in 2015, according to the U.S. Travel Association, a slippage the group said equates to 7.4 million visitors and $32.2 billion in spending."

What does this mean? What might the consequences be?

First, if the foreign tourism decline continues, experience tells us that after prolonged revenue losses, affected industries (e.g., hotels, transportation, restaurants, retail shopping, etc.) and companies will layoff or terminate workers. Not good for workers. Not good for the United States economy.

Second, it's great that several companies have organized together into groups... trade associations for several industries; and then several trade associations organized into a coalition... what you might call an uber-trade association... to highlight their concerns, remain competitive, and advocate for their interests. You'd expect any administration which promised to be pro-business would listen these concerns.

Third, the freedom to organize is an important part of a democracy, and a competitive marketplace. Workers want this freedom, too. Sadly, too many corporate executives and politicians deny workers the same freedoms they want their businesses to enjoy. You've probably heard the claim: "corporations are people, my friend." I guess they are a special class of people with more freedom than flesh-and-blood persons.

What do you think of the foreign visitor travel decline?

Posted at 08:30 AM in Corporate Responsibility, Retail, Travel | Permalink | Comments (2)

The enrollment of foreign students to our universities is also significantly down.

The real problem is that foreign visitors and foreign students despise President Trump for his vile statements and misconduct and are expressing their revulsion by staying away from the United States. And Trump’s xenophobic statements about foreigners, especially those of color, has furtherbm frightened and disgusted foreign visitors and students. Those folks have good options elsewhere for tourism and study, and so don’t have to endure our President’s insults and can and are taking their custom elsewhere.

Because President Trump is a pariah, the United States and its excellent universities are reviled.