Earlier this month,, the U.S. Federal Trade Commission (FTC) released its annual report of complaints submitted by consumers in the United States. The report is helpful is understand the most frequent types of scams and reports consumers experienced.

The latest report, titled 2017 Consumer Sentinel Network Data Book, includes complaints from 2.68 million consumers, a decrease from 2.98 million in 2016. However, consumers reported losing a total of $905 million to fraud in 2017, which is $63 million more than in 2016. The most frequent complaints were about debt collection (23 percent), identity theft (14 percent), and imposter scams (13 percent). The top 20 complaint categories:

While the median loss for all fraud reports in 2017 was $429, consumers reported larger losses in certain types of scams: travel, vacations and timeshare plans ($1,710); mortgage foreclosure relief and debt management ($1,200); and business/job opportunities ($1,063).

"The states with the highest per capita rates of fraud reports in 2017 were Florida, Georgia, Nevada, Delaware, and Michigan. For identity theft, the top states in 2017 were Michigan, Florida, California, Maryland, and Nevada."

What's new in this report is that it details financial losses by age group. The FTC report concluded:

"Consumers in their twenties reported losing money to fraud more often than those over age 70. For example, among people aged 20-29 who reported fraud, 40 percent indicated they lost money. In comparison, just 18 percent of those 70 and older who reported fraud indicated they lost any money. However, when these older adults did report losing money to a scammer, the median amount lost was greater. The median reported loss for people age 80 and older was $1,092 compared to $400 for those aged 20-29." 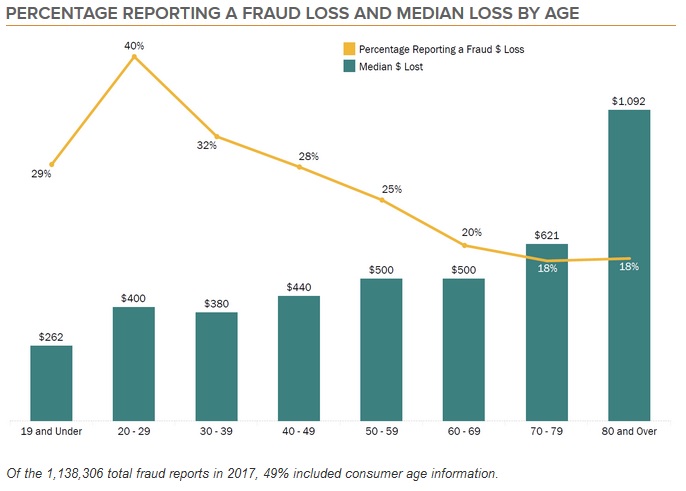 The second chart is key. Twice as many younger consumers (40 percent, ages 20 - 29) reported fraud losses compared to 18 percent of consumers ages 70 and older. At the same time, those older consumers lost more money. So, older consumers were more skilled at spotting scams and few fell victim to scams. It seems both groups could learn from each other.

CBS News interviewed a millennial who fell victim to a mystery-shopper scam, which seemed to be a slick version of the old check scam. It seems wise for all consumers, regardless of age, to maintain awareness about the types of scams. Pick a news source or blog you trust. Hopefully, this blog.

Below is a graphic summarizing the 2017 FTC report: 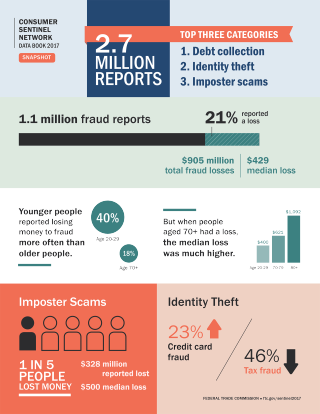