There has been plenty of controversy recently surrounding social media: job advertisements which exclude older workers, concerns that social media threaten democracies, transparency concerns about political advertisements, censorship applied inconsistently, politicians blocking constituents, promises to do better by Facebook, and more. Given these issues, it's reasonable to ask: who uses social media? Which sites? Has this changed over time? Would any users stop using social media?

"Facebook remains the primary platform for most Americans. Roughly two-thirds of U.S. adults (68%) now report that they are Facebook users, and roughly three-quarters of those users access Facebook on a daily basis. With the exception of those 65 and older, a majority of Americans across a wide range of demographic groups now use Facebook... The video-sharing site YouTube – which contains many social elements, even if it is not a traditional social media platform – is now used by nearly three-quarters of U.S. adults and 94% of 18- to 24-year-olds... Some 78% of 18- to 24-year-olds use Snapchat, and a sizeable majority of these users (71%) visit the platform multiple times per day. Similarly, 71% of Americans in this age group now use Instagram and close to half (45%) are Twitter users... Pinterest remains substantially more popular with women (41% of whom say they use the site) than with men (16%). LinkedIn remains especially popular among college graduates and those in high-income households. Some 50% of Americans with a college degree use LinkedIn, compared with just 9% of those with a high school diploma or less. The messaging service WhatsApp is popular in Latin America, and this popularity also extends to Latinos in the United States – 49% of Hispanics report that they are WhatsApp users, compared with 14% of whites and 21% of blacks."

The report was based on telephone interviews of 2,002 adults (18 years of age or older) living in the United States. The interviews were conducted during Jan. 3 - 10, 2018, and included 500 respondents via landline telephones, and 1,502 respondents via mobile phones. The survey was conducted by interviewers under the direction of Abt Associates. 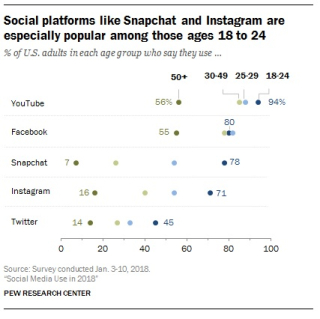 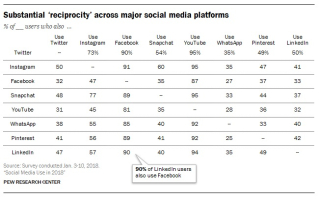 View more information and details in the full report at the Pew Research Center site.

Posted at 09:04 AM in Social Networking, Statistics, Surveys | Permalink | Comments (0)