Home Archives Resources Profiile Feeds/RSS
Security Experts: Breach At Panera Bread Affected Millions. Questions Linger About Vulnerability Fix
How To View The List Of Advertisers Tracking You On Facebook. Any Surprises On Your List?

You've probably heard about the massive privacy and data security breach at Facebook.com where users' information, plus their friends' information was captured and shared with Cambridge Analytica. by an app created by an academic professor. Now, you want to know if your information was harvested. 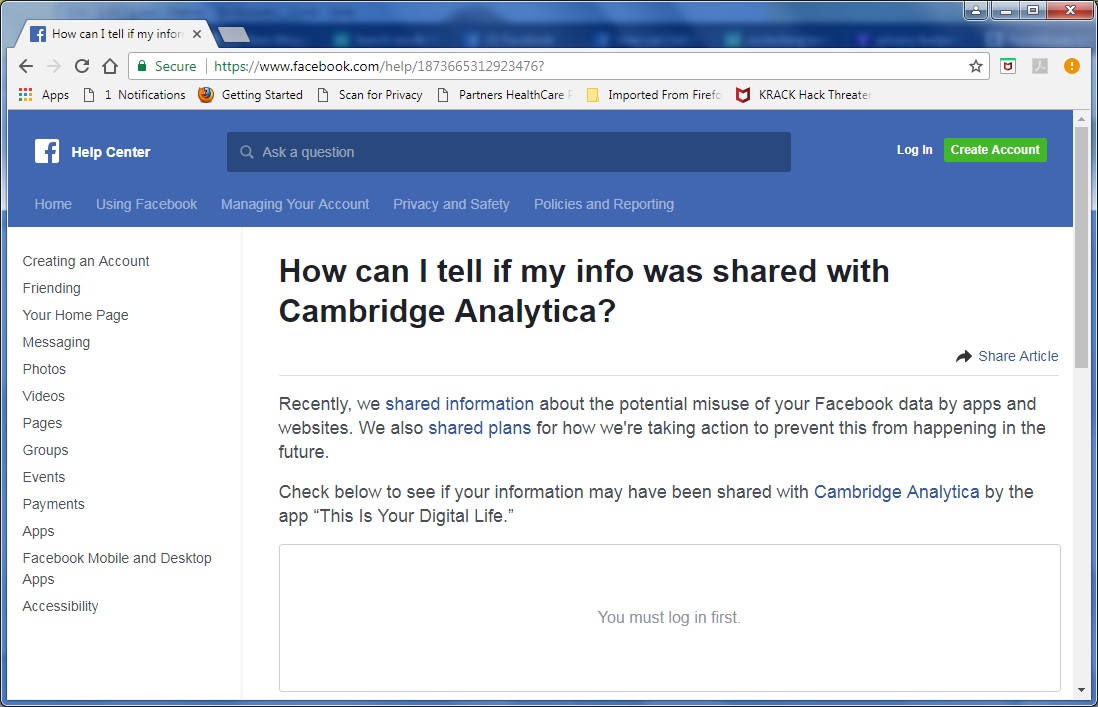 If you have already signed into your Facebook account and your information was not harvested, then the main column of the page displays: 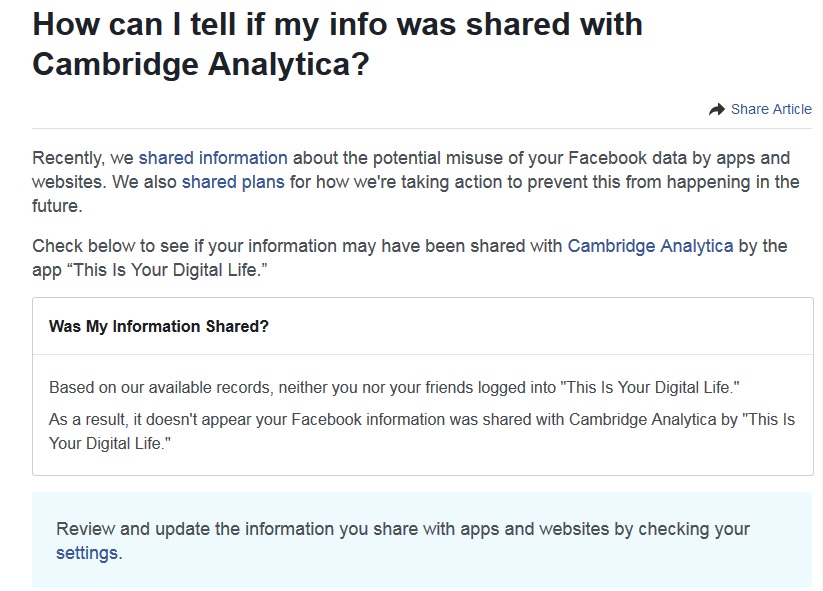 If your information was harvested, then the content under "Was My Information Shared?" will be different. It may display this:

What To Do Next

There's not a lot you can do immediately. CNN Tech advised:

"Even if you delete your Facebook account, or remove third-party apps connected to your profile, the third-party apps will still have access to data they previously collected. Users have to contact the app individually to have the data be removed... According to a notice on affected accounts, the "small number of people" who accessed the app also shared their News Feed, timeline, posts and messages. A Facebook spokesperson confirmed that 1,500 users who logged into the app granted explicit access to their private message inbox... For now, the platform is directing people to their Settings page to see which apps are connected to their accounts, such as Uber and Netflix. Users can also disconnect those apps... Walt Mossberg, a veteran tech reporter and cofounder of tech website Recode, urged Facebook to let users know which friends accessed the app and when..."

Yeah, that! Facebook should inform affected users which of their friends contributed to the data leakage.

Of course, Facebook wants its users to keep using the service. Facebook announced on March 21st that it will, 1) investigate all apps that had access to large amounts of information and conduct full audits of any apps with suspicious activity; 2) inform users affected by apps that have misused their data; 3) disable an app's access to a member's information if that member hasn't used the app within the last three months; 4) change Login to "reduce the data that an app can request without app review to include only name, profile photo and email address;" 5) encourage members to manage the apps they use; and reward users who find vulnerabilities.

Those actions seem good, but too little too late. What can affected users do?

Facebook has a new tool for members to review and disable, in bulk, all of the apps with access to their data. Follow these handy step-by-step instructions by Mashable. And, users should also disable the Facebook API platform for their account. If you use the Firefox web browser, then install the new Facebook Container add-on specifically designed to prevent Facebook from tracking you. Don't use Firefox? You might try the Privacy Badger add-on instead. I've used it happily for years.

Whatever you do, remember that lots of advertising networks and tech companies besides Facebook want to track your movements around the web. Some of those companies include internet service providers (ISPs), since the U.S. Federal Communications Commission (FCC) killed both broadband privacy and net neutrality in 2017.

A windfall for broadband providers, and terrible for consumers. You might contact your elected officials and demand that the FCC put broadband privacy and net neutrality protections back into place.