Home Archives Resources Profiile Feeds/RSS
The DIY Revolution: Consumers Alter Or Build Items Previously Not Possible. Is It A Good Thing?
Health Insurers Are Vacuuming Up Details About You — And It Could Raise Your Rates

"The European Commission found that Google has abused its dominant market position in three ways: tying access to the Play store to installation of Google Search and Google Chrome; paying phone makers and network operators to exclusively install Google Search, and preventing manufacturers from making devices running forks of Android... Google won't let smartphone manufacturers install Play on their phones unless they also make its search engine and Chrome browser the defaults on their phones. In addition, they must only use a Google-approved version of Android. This has prevented companies like Amazon.com, which developed a fork of Android it calls FireOS, from persuading big-name manufacturers to produce phones running its OS or connecting to its app store..."

Reportedly, less than 10% of Android phone users download a different browser than the pre-installed default. Less than 1% use a different search app. View the archive of European Commission Android OS documents. 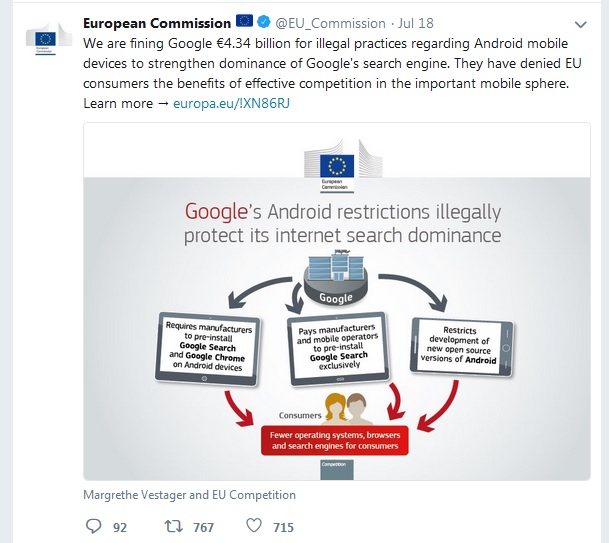 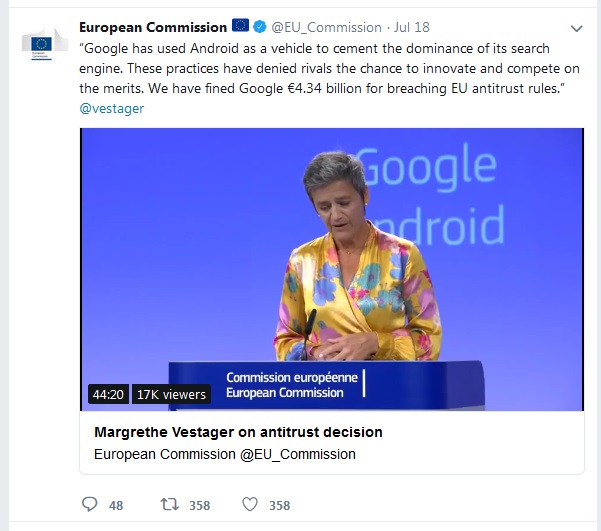 And, The Guardian newspaper reported:

"Soon after Brussels handed down its verdict, Google announced it would appeal. "Android has created more choice for everyone, not less," a Google spokesperson said... Google has 90 days to end its "illegal conduct" or its parent company Alphabet could be hit with fines amounting to 5% of its daily [revenues] for each day it fails to comply. Wednesday’s verdict ends a 39-month investigation by the European commission’s competition authorities into Google’s Android operating system but it is only one part of an eight-year battle between Brussels and the tech giant."

According to the Reuters news service, a third EU case against Google, involving accusations that the tech company's AdSense advertising service blocks users from displaying search ads from competitors, is still ongoing.

President Trump shared his views about the EU's fine on Google:

"Weighing in on Twitter, Trump criticized the EU for imposing a $5.1 billion fine on "one of our great companies, Google." He added that the EU "truly have taken advantage of the U.S., but not for long!"