Home Archives Resources Profiile Feeds/RSS
Uber To Pay $148 Million To Settle Lawsuits And Coverup From Its 2016 Data Breach
FTC: How You Should Handle Robocalls. 4 Companies Settle Regarding Privacy Shield Claims

On Friday, Facebook announced a data breach which affected about 50 million users of the social networking service. Facebook engineers discovered the hack on September 25th. The Facebook announcement explained:

"... that attackers exploited a vulnerability in Facebook’s code that impacted “View As” a feature that lets people see what their own profile looks like to someone else. This allowed them to steal Facebook access tokens which they could then use to take over people’s accounts. Access tokens are the equivalent of digital keys that keep people logged in to Facebook so they don’t need to re-enter their password every time they use the app... This attack exploited the complex interaction of multiple issues in our code. It stemmed from a change we made to our video uploading feature in July 2017, which impacted “View As.” The attackers not only needed to find this vulnerability and use it to get an access token, they then had to pivot from that account to others to steal more tokens." 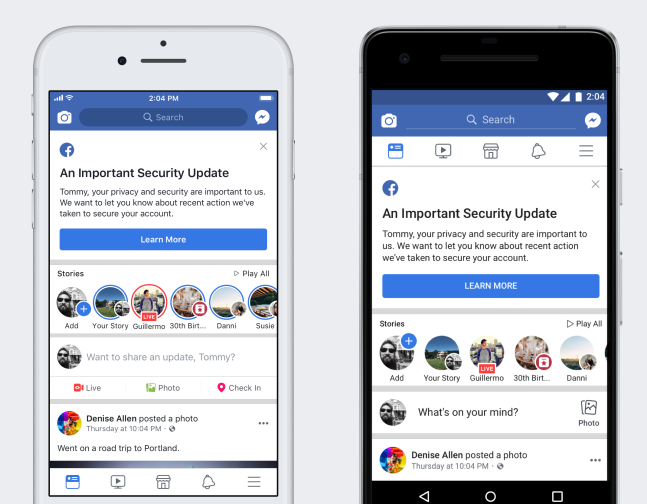 Many mobile users will see the message in the image displayed on the right. Facebook said it has fixed the vulnerability, notified law enforcement, turned off the "View As" feature until the breach investigation is finished, and has already reset the access tokens of about 90 million users.

Why the higher number of 90 million and not 50 million? According to the announcement:

"... we have reset the access tokens of the almost 50 million accounts we know were affected to protect their security. We’re also taking the precautionary step of resetting access tokens for another 40 million accounts that have been subject to a “View As” look-up in the last year. As a result, around 90 million people will now have to log back in to Facebook, or any of their apps that use Facebook Login. After they have logged back in, people will get a notification at the top of their News Feed explaining what happened."

So, 90 million users affected and 50 million known for sure. What to make of this? Wait for findings in the completed breach investigation. Until then, we won't know exactly how attackers broke in, what they stole, and the true number of affected users.

What else to make of this? Facebook's announcement skillfully avoided any direct mentions of exactly when the attack started. The announcement stated that the vulnerability was related to a July 2017 change to the video uploading feature. So, the attack could have started soon after that. Facebook didn't say, and it may not know. Hopefully, the final breach investigation report will clarify things.

And, there is more disturbing news.

Some users have claimed that Facebook blocked them from posting messages about the data breach. TechCrunch reported:

"Some users are reporting that they are unable to post [the] story about a security breach affecting 50 million Facebook users. The issue appears to only affect particular stories from certain outlets, at this time one story from The Guardian and one from the Associated Press, both reputable press outlets... some users, including members of the staff here at TechCrunch who were able to replicate the bug, were met with the following error message which prevented them from sharing the story."

Well, we now know that -- for better or for worse -- Facebook has an automated tool to identify spam content in real-time. And, this tool can easily misidentify content as spam, which isn't spam. Not good.

Reportedly, this error message problem has been fixed. Regardless, it should never have happened. The data breach is big news. Clearly, many people want to read and post about it. Popularity does not indicate spam. And Facebook owes users an explanation about its automated tool.

Did Facebook notify you directly of its data breach? Did you get this spam error message? How concerned are you? Please share your experience and opinions below.