"... the attackers already controlled a set of accounts, which were connected to Facebook friends. They used an automated technique to move from account to account so they could steal the access tokens of those friends, and for friends of those friends, and so on, totaling about 400,000 people. In the process, however, this technique automatically loaded those accounts’ Facebook profiles, mirroring what these 400,000 people would have seen when looking at their own profiles. That includes posts on their timelines, their lists of friends, Groups they are members of, and the names of recent Messenger conversations. Message content was not available to the attackers, with one exception. If a person in this group was a Page admin whose Page had received a message from someone on Facebook, the content of that message was available to the attackers.

The attackers used a portion of these 400,000 people’s lists of friends to steal access tokens for about 30 million people. For 15 million people, attackers accessed two sets of information – name and contact details (phone number, email, or both, depending on what people had on their profiles). For 14 million people, the attackers accessed the same two sets of information, as well as other details people had on their profiles. This included username, gender, locale/language, relationship status, religion, hometown, self-reported current city, birthdate, device types used to access Facebook, education, work, the last 10 places they checked into or were tagged in, website, people or Pages they follow, and the 15 most recent searches. For 1 million people, the attackers did not access any information."

Facebook promises to notify the 30 million breach victims. While it lowered the number of breach victims from 50 to 30 million, this still isn't good. 30 million is still a lot of users. And, hackers stolen the juiciest data elements -- contact and profile information -- about breach victims, enabling them to conduct more fraud against victims, their family, friends, and coworkers. Plus, note the phrase: "the attackers already controlled a set of accounts." This suggest the hackers created bogus Facebook accounts, had the sign-in credentials (e.g., username, password) of valid accounts, or both. Not good.

Moreover, there is probably more bad news coming, as other affected companies assess the (collateral) damage. Experts said that Facebook's latest breach may be worse since many companies participate in the Facebook Connect program. Not good.

The timeline of the data breach and intrusion detection are troubling. Facebook admitted that the vulnerability hackers exploited existed from July, 2017 to September, 2018 when it noticed, "an unusual spike of activity that began on September 14, 2018." While it is good that Facebook's tech team notice the intrusion, the bad news is the long open window the vulnerability existed provided plenty of time for hackers to plot and do damage.  That the hackers used automated tools suggests that the hackers knew about the vulnerabilities for a long time... long enough to decide what to do, and then build automated tools to steal users' information. Where was Facebook's quality assurance (QA) testing department during all of this? Not good.

"Portal’s debut comes at a time when Facebook is struggling to reassure the public that it’s capable of protecting users’ privacy... In promoting Portal, Facebook is emphasizing the devices’ security... The company asserts that it doesn't listen or view the content of Portal calls, and the Smart Camera’s artificial intelligence–powered tracking doesn’t run on Facebook servers or use facial recognition. Audio snippets of voice commands can also be deleted from your Facebook Activity Log... because Portal relies on Facebook’s Messenger service, those calls are still under the purview of Facebook’s data privacy policy. The company collects information about “the people, Pages, accounts, hashtags and groups you are connected to and how you interact with them across our Products, such as people you communicate with the most or groups you are part of.” This means that Facebook will know who you’re talking to on Portal and for how long."

Buzzfeed also listed several comments by users. Some are skeptical of privacy promises: 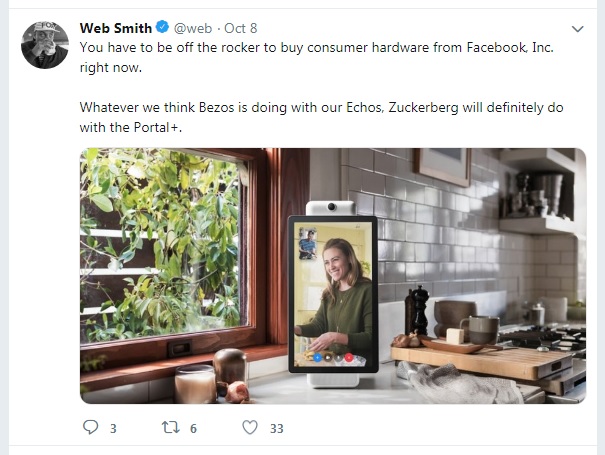 Who is going to buy Portal while breach investigation results from this latest data breach, and from its Cambridge Analytica breach, are still murky? What other systems and software vulnerabilities exist? Would you buy Portal?