Many consumers prefer to pay for products and services using methods other than cash. How secure are these non-cash payment methods? The Federal Reserve Board (FRB) analyzed the payments landscape within the United States. Its October 2018 report found good and bad news. The good news: non-cash payments fraud is small. The bad news:

"... fraud totals and rates for payments processed over general-purpose credit and debit card networks, including non-prepaid and prepaid debit card networks, the automated clearinghouse (ACH) transfer system, and the check clearing system. These payment systems form the core of the noncash payment and settlement systems used to clear and settle everyday payments made by consumers and businesses in the United States. The fraud data were collected as part of Federal Reserve surveys of depository institutions in 2012 and 2015 and payment card networks in 2015 and 2016. The types of fraudulent payments covered in the study are those made by an unauthorized third party."

Data from the card network survey included general-purpose credit and debit (non-prepaid and prepaid) card payments, but did not include ATM withdrawals. The card networks include Visa, MasterCard, Discover and others. Additional findings:

The report also covered EMV chip cards, which were introduced to stop counterfeit card fraud. Card networks distributed both chip cards to consumers, and chip-reader terminals to retailers. The banking industry had set an October 1, 2015 deadline to switch to chip cards. The FRB report: 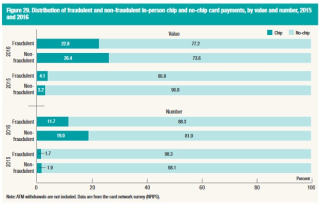