Home Archives Resources Profiile Feeds/RSS
If You're Over 50, Chances Are The Decision To Leave a Job Won't Be Yours
Pennsylvania Ruling May Help Plaintiffs in Class Action Lawsuits About Data Breaches

To Estimate The Value Of Facebook, A Study Asked How Much Money Users Would Demand As Payment To Quit The Service

What is the value of Facebook to its users? In a recent study, researchers explored answers to that question:

"Because [Facebook] users do not pay for the service, its benefits are hard to measure. We report the results of a series of three non-hypothetical auction experiments where winners are paid to deactivate their Facebook accounts for up to one year..."

The study was published in PLOS One, a peer-reviewed journal by the Public Library of Science. The study is important and of interest to economists because:

"... If Facebook were a country, it would be the world’s largest in terms of population with over 2.20 billion monthly active users, 1.45 billion of whom are active on a daily basis, spending an average of 50 minutes each day on Facebook-owned platforms (e.g., Facebook, Messenger, Instagram)... Despite concerns about loss of relevance due to declining personal posts by users, diminished interest in adoption and use by teens and young adults, claims about potential manipulation of its content for political purposes, and leaks that question the company’s handling of private user data, Facebook remains the top social networking site in the world and the third most visited site on the Internet after Google and YouTube...  Since its launch in 2004, Facebook has redefined how we communicate... Facebook had 23,165 employees as of September 30, 2017. This is less than 1% the number employed by Walmart, the world’s largest private employer... Because Facebook’s users pay nothing for the service, Facebook does not contribute directly to gross domestic product (GDP), economists’ standard metric of a nation’s output. In this context, it may seem surprising then that Facebook is the world’s fifth most valuable company with a market capitalization of $541.56 billion in May 2018... In 2017, the company had $40.65 billion in revenues, primarily from advertising, and $20.20 billion in net income..."

The detailed methodology of the study included:

"... a Vickrey second-price approach. In a typical experimental auction, participants bid to purchase a good or service. The highest bidder wins the auction and pays a price equal to the second-highest bid. This approach is designed such that participants’ best strategy is to bid their true willingness-to-pay... Because our study participants already had free access to Facebook, we could not ask people how much they would be willing to pay for access to the service. Instead, people bid for how much they would need in compensation to give up using Facebook. Economists have used these “willingness-to-accept” (WTA) auctions to assess the value of mundane items such as pens and chocolate bars, but also more abstract or novel items such as food safety, goods free of genetically modified ingredients, the stigma associated with HIV, battery life in smartphones, and the payment people require to endure an unpleasant experience... In this study, each bid can be interpreted as the minimum dollar amount a person would be willing to accept in exchange for not using Facebook for a given time period. The three auctions differ in the amount of time winners would have to go without using Facebook..."

"... a measure of value equal to the difference between the most a consumer would be willing to pay for a service and the price she actually pays to use it. When considering all consumers, Figure 1 below shows consumer surplus is the area under the demand curve, which shows consumers’ willingness to pay, and above the price; it is generally interpreted as consumers’ net benefit from being able to access a good or service in the marketplace. GDP, by contrast, is the market value of all final goods and services produced domestically in a given year..." 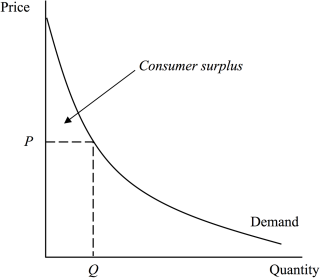 Across the three auctions, study participants submitted bids ranging from $1,130 to $2,076 on average. The researchers found:

"... across all three samples, the mean bid to deactivate Facebook for a year exceeded $1,000. Even the most conservative of these mean WTA estimates, if applied to Facebook’s 214 million U.S. users, suggests an annual value of over $240 billion to users... Facebook reached a market capitalization of $542 billion in May 2018. At 2.20 billion active users in March 2018, this suggests a value to investors of almost $250 per user, which is less than one fourth of the annual value of [payments demanded by study participants to quit the service]. This reinforces the idea that the vast majority of benefits of new inventions go not to the inventors but to users."

To summarize, users in the study demanded at least $1,000 yearly each to quit the service. That's a measure of the value of Facebook to users. And, that value far exceeds the $250 value of each user to investors. The authors concluded:

"Concerns about data privacy, such as Cambridge Analytica’s alleged problematic handling of users’ private information, which are thought to have been used to influence the 2016 United States presidential election, only underscore the value Facebook’s users must derive from the service. Despite the parade of negative publicity surrounding the Cambridge Analytica revelations in mid-March 2018, Facebook added 70 million users between the end of 2017 and March 31, 2018. This implies the value users derive from the social network more than offsets the privacy concerns."

The conclusion suggests that the risk of a mass exodus of users is unlikely. I guess Facebook executives will find some comfort in that. However, more research is needed. Different sub-groups of users might demand different values. For example, a sub-group of users who have had their accounts hacked or cloned might demand a different -- perhaps lower -- annual payment amount to quit Facebook.

Another sub-group of users who have been identity theft and fraud victims might demand a higher annual payment to cover the costs of credit monitoring services and/or fraud resolution fees. A third sub-group -- parents and grandparents -- might demand a different payment amount due to the loss of access to family, children and grandchildren.

A one-size-fits-all approach to a WTA value doesn't seem very relevant. Follow-up studies could explore values by these sub-groups and by users with different types of behaviors (e.g., dissatisfaction levels):

Clearly, more research is needed. Would you quit Facebook? If so, how much money would you demand as payment? What follow-up studies are you interested in?

The Editor is right in noting that this type of study of users in the aggregate has its limits, but it also has its uses. The general point is that, in the aggregate, people find a great deal
of value in using Facebook. The interesting question for sociologists and psychologists, as economists don’t like to sully themselves with human emotion, is why? What do people get out of Facebook that makes it so valuable to them that they won’t quit it, even when Facebook has been shown to abuse and misuse their private information; has been used to improperly influence the 2016 election for U.S. president; has been used by adversaries of the U.S. to divide our people; has been a breeding ground for vicious incivility; has been a source for publishing defamations and traducements; has invested, without warrant of law or democratic vote, Facebook’s senior managers as the arbiters of what opinions are permitted to be heard; and such other folly and wickedness too numerous to mention, all of which has subjected Facebook’s users to manipulation by others and has weakened the sinews of our democratic republic by promoting domestic strife and corrupting our elections. Yet, it would take an amount of more than four times Facebook’s market capitalization to pay enough to the average individual user of Facebook to give it up for just one year.

Then there are those on the other extreme, such as me. The value that I place on Facebook, or any social media website, is not only zero; it’s negative. For such as me, the study, therefore, would have to be redesigned to a more traditional study to offer me a sufficient amount to even have a Facebook account, much less use one. That amount would easily run into seven figures, because I not only value my privacy that highly but regards Facebook’s evils and harms so grave and repugnant that I must be very well paid to abet such trespasses upon my privacy and security and to be a part of such folly and wickedness. That to parents some interesting questions about what distinguishes those such as me, who eschew Facebook and other social media.