Automated Following: The Technology For Platoons Of Self-Driving Trucks

"At the Automated Vehicle Symposium in Orlando [in July], one company involved in automated vehicle technology unveiled its vision for using a single driver to drive a pair of vehicles. The approach, named Automated Following, is an advanced platooning system created by Peloton Technology. It uses vehicle-to-vehicle (V2V) technology to let a lead driver control the vehicle and one that is following, in this case large trucks... Platooning works by utilizing V2V communications and radar-based active braking systems, combined with vehicle control algorithms, according to Peloton. The system connects a fully automated follow truck with a driver-controlled lead truck. The V2V link lets the human driven lead truck guide the steering, acceleration and braking of the follow truck..."

To learn more, I visited the Peloton Technology website. The Platoon-Pro section of the site lists the benefits below: 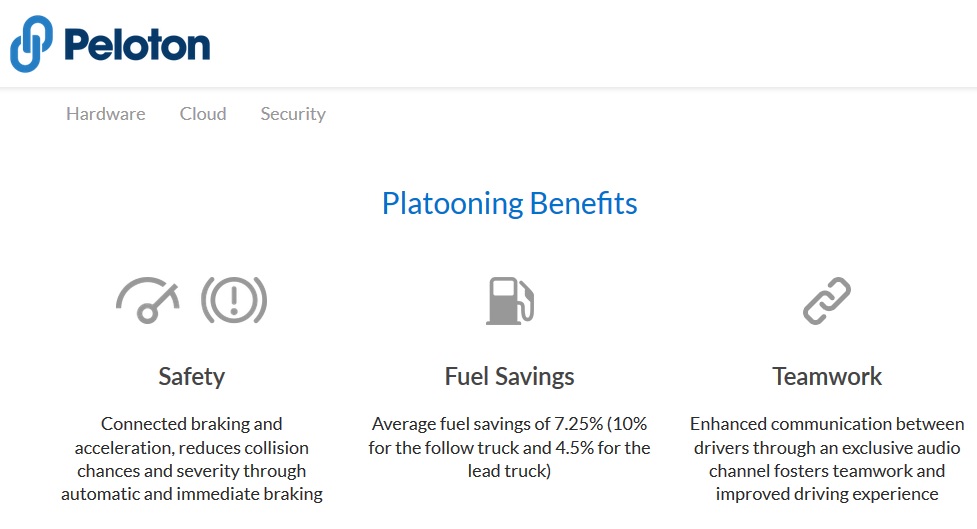 While it's good to read about specific estimates of fuel savings, I was hoping to also read similar estimates about decreased crashes and/or decreased severity of crashes. The page simply listed the safety features.

The site's home page features a "Safety & Platoon" video explaining how a 2-truck platoon might operate. On an interstate highway, both trucks are manned with human drivers. (What happened to the single driver benefit?) The video also shows what happens when a passenger vehicle briefly "cuts" in between a 2-truck platoon:

According to the video, the drivers can vary the distance between two trucks in a platoon. That seems to be a good feature.

The technology raises several questions. First, the video features a "cut in" with a small car. What happens when a larger vehicle, such as a bus, cuts in? What happens when several (large) vehicles cut in between? Second, just because we humans can do something doesn't mean we should do it. 2-truck platoons in the near future could expand to 4- or 5-truck platoons after that. One wonders about the wisdom. Are highways, country roads, and city streets designed to accommodate truck platoons this large?

Third, my impression: a 2-truck platoon sounds like a short train. In the near future, motorists will have to navigate in-between and around platoons of self-driving tractor-trailer trucks. Are motorists ready for this? Historically, auto drivers have had difficulty with traditional railroad crossings. The technology seems to be something which requires plenty of testing.

Another way of asking the question: is this what we want on our streets and highways given existing railroads already designed for trains = long platoons of trucks?

Fourth, security matters. What's being done to prevent the technology being abused? Automated following technology in the hands of bad guys could enable terrorists to deliver platoons of car bombs, or platoons of small boats armed with bombs. So, security (against hacking and against theft) is even more of an issue.

Posted at 10:00 AM in Corporate Responsibility, Internet of Things, Travel | Permalink | Comments (1)

In Arizona, limited tests of self-driving trucks by UPS in joint venture with TuSimple:
https://www.engadget.com/2019/08/15/ups-testing-self-driving-trucks-arizona/