"Facebook, Inc. will pay a record-breaking $5 billion penalty, and submit to new restrictions and a modified corporate structure that will hold the company accountable for the decisions it makes about its users’ privacy, to settle Federal Trade Commission charges that the company violated a 2012 FTC order by deceiving users about their ability to control the privacy of their personal information... The settlement order announced [on July 24th] also imposes unprecedented new restrictions on Facebook’s business operations and creates multiple channels of compliance..."

During 2018, Facebook generated after-tax profits of $22.1 billion on sales of $55.84 billion. While a $5 billion fine is a lot of money, the company can easily afford the record-breaking fine. The fine equals about one month's revenues, or a little over 4 percent of its $117 billion in assets. 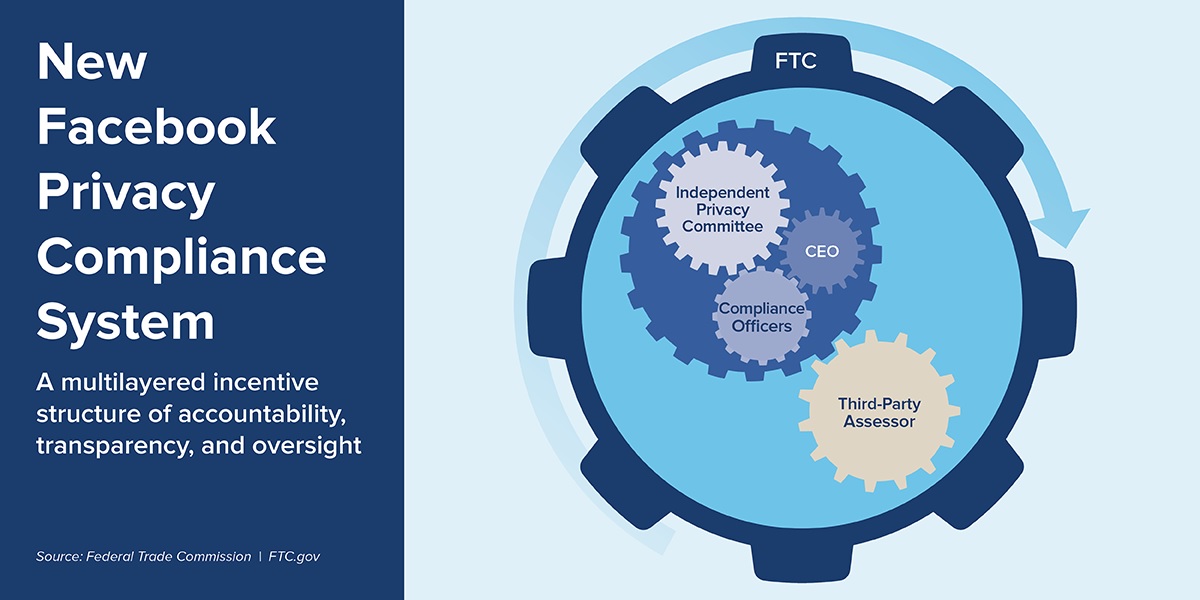 The FTC announcement explained several "unprecedented" restrictions in the settlement order. First, the restrictions are designed to:

"... prevent Facebook from deceiving its users about privacy in the future, the FTC’s new 20-year settlement order overhauls the way the company makes privacy decisions by boosting the transparency of decision making... It establishes an independent privacy committee of Facebook’s board of directors, removing unfettered control by Facebook’s CEO Mark Zuckerberg over decisions affecting user privacy. Members of the privacy committee must be independent and will be appointed by an independent nominating committee. Members can only be fired by a supermajority of the Facebook board of directors."

"... The order enhances the independent third-party assessor’s ability to evaluate the effectiveness of Facebook’s privacy program and identify any gaps. The assessor’s biennial assessments of Facebook’s privacy program must be based on the assessor’s independent fact-gathering, sampling, and testing, and must not rely primarily on assertions or attestations by Facebook management. The order prohibits the company from making any misrepresentations to the assessor, who can be approved or removed by the FTC. Importantly, the independent assessor will be required to report directly to the new privacy board committee on a quarterly basis. The order also authorizes the FTC to use the discovery tools provided by the Federal Rules of Civil Procedure to monitor Facebook’s compliance with the order."

"i) Facebook must exercise greater oversight over third-party apps, including by terminating app developers that fail to certify that they are in compliance with Facebook’s platform policies or fail to justify their need for specific user data; ii) Facebook is prohibited from using telephone numbers obtained to enable a security feature (e.g., two-factor authentication) for advertising; iii) Facebook must provide clear and conspicuous notice of its use of facial recognition technology, and obtain affirmative express user consent prior to any use that materially exceeds its prior disclosures to users; iv) Facebook must establish, implement, and maintain a comprehensive data security program; v) Facebook must encrypt user passwords and regularly scan to detect whether any passwords are stored in plaintext; and vi) Facebook is prohibited from asking for email passwords to other services when consumers sign up for its services."

Wow! Lots of consequences when a manager builds a corporation with a, "move fast and break things" culture, values, and ethics. Assistant Attorney General Jody Hunt for the Department of Justice’s Civil Division said:

"The Department of Justice is committed to protecting consumer data privacy and ensuring that social media companies like Facebook do not mislead individuals about the use of their personal information... This settlement’s historic penalty and compliance terms will benefit American consumers, and the Department expects Facebook to treat its privacy obligations with the utmost seriousness."

There is disagreement among the five FTC commissioners about the settlement, as the vote for the order was 3 - 2. FTC Commissioner Rebecca Kelly Slaughter stated in her dissent:

"My principal objections are: (1) The negotiated civil penalty is insufficient under the applicable statutory factors we are charged with weighing for order violators: injury to the public, ability to pay, eliminating the benefits derived from the violation, and vindicating the authority of the FTC; (2) While the order includes some encouraging injunctive relief, I am skeptical that its terms will have a meaningful disciplining effect on how Facebook treats data and privacy. Specifically, I cannot view the order as adequately deterrent without both meaningful limitations on how Facebook collects, uses, and shares data and public transparency regarding Facebook’s data use and order compliance; (3) Finally, my deepest concern with this order is that its release of Facebook and its officers from legal liability is far too broad..."

"In 2012, Facebook entered into a consent order with the FTC, resolving allegations that the company misrepresented to consumers the extent of data sharing with third-party applications and the control consumers had over that sharing. The 2012 order barred such misrepresentations... Our complaint announced today alleges that Facebook failed to live up to its commitments under that order. Facebook subsequently made similar misrepresentations about sharing consumer data with third-party apps and giving users control over that sharing, and misrepresented steps certain consumers needed to take to control [over] facial recognition technology. Facebook also allowed financial considerations to affect decisions about how it would enforce its platform policies against third-party users of data, in violation of its obligation under the 2012 order... The $5 billion penalty serves as an important deterrent to future order violations... For purposes of comparison, the EU’s General Data Protection Regulation (GDPR) is touted as the high-water mark for comprehensive privacy legislation, and the penalty the FTC has negotiated is over 20 times greater than the largest GDPR fine to date... IV. The Settlement Far Exceeds What Could be Achieved in Litigation and Gives Consumers Meaningful Protections Now... Even assuming the FTC would prevail in litigation, a court would not give the Commission carte blanche to reorganize Facebook’s governance structures and business operations as we deem fit. Instead, the court would impose the relief. Such relief would be limited to injunctive relief to remedy the specific proven violations... V. Mark Zuckerberg is Being Held Accountable and the Order Cabins His Authority Our dissenting colleagues argue that the Commission should not have settled because the Commission’s investigation provides an inadequate basis for the decision not to name Mark Zuckerberg personally as a defendant... The provisions of this Order extinguish the ability of Mr. Zuckerberg to make privacy decisions unilaterally by also vesting responsibility and accountability for those decisions within business units, DCOs, and the privacy committee... the Order significantly diminishes Mr. Zuckerberg’s power — something no government agency, anywhere in the world, has thus far accomplished. The Order requires multiple information flows and imposes a robust system of checks and balances..."

Time will tell how effective the order's restrictions and $5 billion are. That Facebook can easily afford the penalty suggests the amount is a weak deterrence. If all or part of the penalty is tax-deductible (yes, tax-deductible fines have happened before to directly reduce a company's taxes), then that would weaken the deterrence effectiveness. And, if all or part of the fine is tax-deductible, then we taxpayers just paid for part of Facebook's alleged wrongdoing. I'll bet most taxpayers wouldn't want that.

Facebook stated in a July 24th news release that its second-quarter 2019 earnings included:

"... an additional $2.0 billion legal expense related to the U.S. Federal Trade Commission (FTC) settlement and a $1.1 billion income tax expense due to the developments in Altera Corp. v. Commissioner, as discussed below. As the FTC expense is not expected to be tax-deductible, it had no effect on our provision for income taxes... In July 2019, we entered into a settlement and modified consent order to resolve the inquiry of the FTC into our platform and user data practices. Among other matters, our settlement with the FTC requires us to pay a penalty of $5.0 billion and to significantly enhance our practices and processes for privacy compliance and oversight. In particular, we have agreed to implement a comprehensive expansion of our privacy program, including substantial management and board of directors oversight, stringent operational requirements and reporting obligations, and a process to regularly certify our compliance with the privacy program to the FTC. In the second quarter of 2019, we recorded an additional $2.0 billion accrual in connection with our settlement with the FTC, which is included in accrued expenses and other current liabilities on our condensed consolidated balance sheet."

"Not expected to be" is not the same as definitely not. And, business expenses reduce a company's taxable net income.

A copy of the FTC settlement order with Facebook is also available here (Adobe PDF format; 920K bytes). Plus, there is more:

"... the FTC also announced today separate law enforcement actions against data analytics company Cambridge Analytica, its former Chief Executive Officer Alexander Nix, and Aleksandr Kogan, an app developer who worked with the company, alleging they used false and deceptive tactics to harvest personal information from millions of Facebook users. Kogan and Nix have agreed to a settlement with the FTC that will restrict how they conduct any business in the future."

What are your opinions? Hopefully, some tax experts will weigh in about the fine.