On September 26, the Port of Vancouver welcomed the MS Roald Amundsen. Some call this cruise ship the "Tesla of the cruise industry." The International Business Times explained:

"MS Roald Amundsen can be called Tesla of the cruise industry as it is similar to the electrically powered Tesla car that set off a revolution in the auto sector by running on batteries... The state of the art ship was unveiled earlier this year by Scandinavian cruise operator Hurtigruten. The cruise ship is one of the most sustainable cruise vessels with the distinction of being one of the two hybrid-electric cruise ships in the world. MS Roald Amundsen utilizes hybrid technology to save fuel and reduce carbon dioxide emissions by 20 percent." 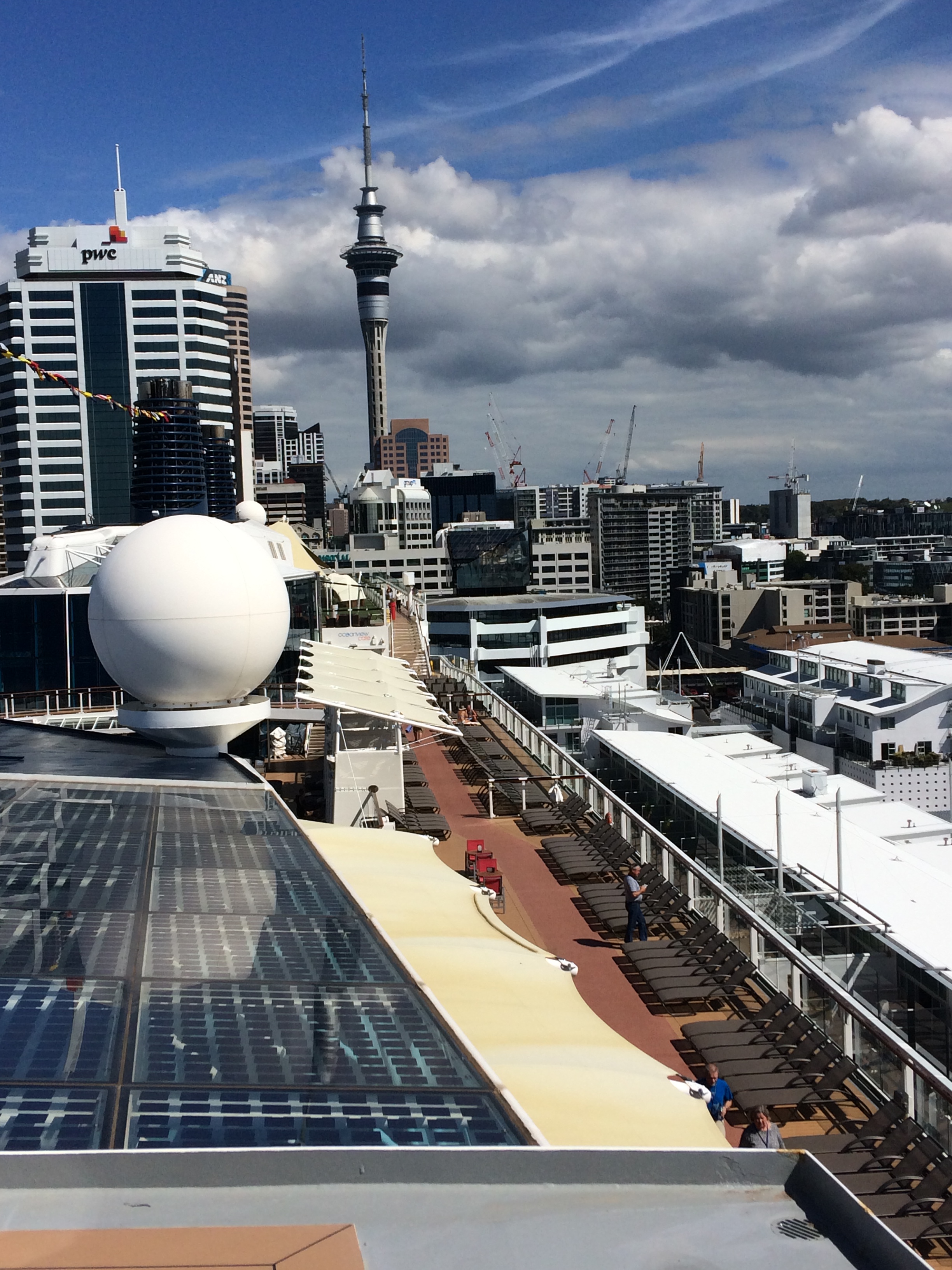 While some cruise ships already use onboard solar panels to reduce fuel consumption, this is the first hybrid-electric cruise ship. It is an important step forward to prove that large ships can be powered in this manner.

Several ships in Royal Caribbean Cruise Line's fleet, including the Oasis of the Seas, have been outfitted with solar panels. The image on the right provides a view of  the solar panels on the Celebrity Solstice cruise ship, while it was docked in Auckland, New Zealand in March, 2019. The panels are small and let sunlight through.

The Vancouver Is Awesome site explained why the city gave the MS Roald Amundsen special attention:

"... the Vancouver Fraser Port Authority, the federal agency responsible for the stewardship of the port, has set its vision to be the world’s most sustainable port. As a part of this vision, the port authority works to ensure the highest level of environmental protection is met in and around the Port of Vancouver. This commitment resulted in the port authority being the first in Canada and third in the world to offer shore power, an emissions-reducing initiative, for cruise ships. That said, a shared commitment to sustainability isn’t the only thing Hurtigruten has in common with our awesome city... The hybrid-electric battery used in the MS Roald Amundsen was created by Vancouver company, Corvus Energy."

Reportedly, the MS Roald Amundsen can operate for brief periods of time only on battery power, resulting in zero fuel usage and zero emissions. The Port of Vancouver's website explains its Approach to Sustainability policy:

"We are on a journey to meet our vision to become the world’s most sustainable port. In 2010 we embarked on a two-year scenario planning process with stakeholders called Port 2050, to improve our understanding of what the region may look like in the future... We believe a sustainable port delivers economic prosperity through trade, maintains a healthy environment, and enables thriving communities, through meaningful dialogue, shared aspirations and collective accountability. Our definition of sustainability includes 10 areas of focus and 22 statements of success..."

I encourage everyone to read the Port of Vancouver's 22 statements of success for a healthy environment and sustainable port. Selected statements from that list:

In separate but related news, government officials in the French Riviera city of Cannes are considering a ban of cruise ships to curb pollution. The Travel Pulse site reported:

"The ban would apply to passenger vessels that do not meet a 0.1 percent sulfur cap in their fuel emissions. Any cruise ship that attempted to enter the port that did not meet the higher standards would be turned away without allowing passengers to disembark."

During 2018, about 370,000 cruise ship passengers visited Cannes, making it the fourth busiest port in France. Officials are concerned about pollution. Other European ports are considering similar bans:

"Another French city, Saint-Raphael, has also instituted similar rules to curb the pollution of the water and air around the city. Other European ports such as Santorini and Venice have also cited cruise ships as a significant cause of over-tourism across the region."

If you live and/or work in a port city, it seems worthwhile to ask your local government or port authority what it is doing about sustainability and pollution. The video below explains some of the features in this new "expedition ship" with itineraries and activities that focus upon science:

[Editor's note: this post was updated to include a photo of solar panels on the Celebrity Solstice cruise ship.]